Evan Fournier and Kemba Walker haven’t shared much time on the floor since the Celtics acquired Fournier at the trade deadline.

Per Cleaning the Glass, the duo has played 146 possessions together. After Fournier arrived, he was sidelined briefly due to a false positive COVID test, then sidelined for three weeks due to a real one. Walker, meanwhile, missed the last four games after suffering a strained side. In all, Fournier has played more games with Luke Kornet (seven) than he has with Walker (six).

But those 146 possessions have been very promising for the Celtics. With Walker and Fournier on the floor, the Celtics have outscored opponents by 23.5 points per 100 possessions.

“I think that [Fournier] and Kemba really like playing with each other,” Brad Stevens said unprompted after the Celtics’ blowout win over the Magic on Wednesday. “I think that has a chance to have good chemistry, we just haven’t seen it that much yet. I think they’ve just played against each other for so long, I think they’re intrigued by that as well. I think he looks a little bit more comfortable every night.”

Walker and Fournier were Southeast Division rivals for years — Walker in Charlotte, and Fournier in Orlando. As a duo, they have been part of a rejuvenated Celtics group that looks significantly more coherent than the roster assembled at the start of the season.

“He just knows how to play the game the right way,” Walker said. “I’ve played against Evan for years now. But he’s an incredible player. I think we just had an instant chemistry. He’s just fun to play with.”

On Wednesday, Walker — fresh off rehab and recovery from his side strain — poured in 32 points and led the Celtics over Fournier’s former team. Menwhile, Fournier dropped 18 points on 8-for-14 shooting and scored in a variety of ways including a few flip shots around the paint.

“He has mastered that runner in the lane,” longtime Magic play-by-play broadcaster David Steele — who has seen a few of Fournier’s baskets over the years — noted.

That quality will endear Fournier to the coaching staff immediately. The Celtics seem to have an affinity for big wings who can handle the ball, and Fournier is a perfect example.

“I’m trying to find ways to get some shots for my teammates,” Fournier said. “And it’s true that it’s not easy, but I feel like Kemba and I play well together because — I don’t know, maybe because we had the same coach in previous years. Maybe that’s the reason? But he’s the type of player that can really catch-and-shoot and play off each other, and when I’m driving, I look for my teammates. Sometimes he’s open, so I just try to hit him.”

Much has been (correctly) made of Jayson Tatum and Jaylen Brown this season, and they remain the two most important players on the Celtics by a wide margin. But while Tatum and Brown establish the Celtics’ floor as a playoff team, their ceiling might be determined by how secondary stars like Walker and Fournier perform.

Walker acknowledged how important Fournier is to the Celtics’ playoff hopes. 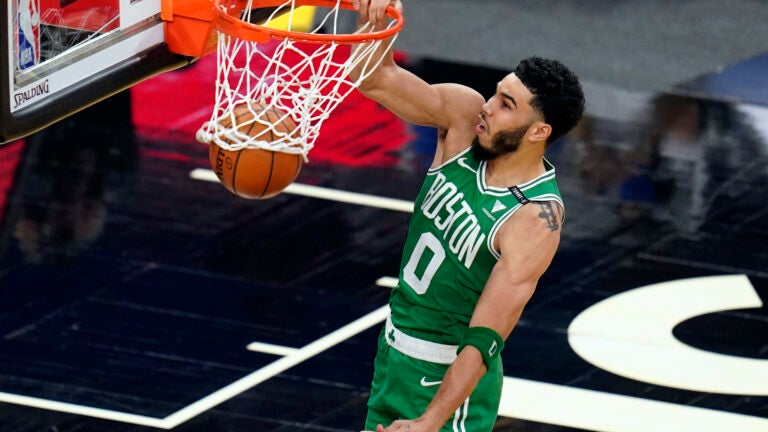 5 takeaways as Kemba Walker leads Celtics in rout of Magic