The Celtics dropped the first of two must-win games against the Heat on Sunday, falling 130-124.

The Heat dominated the Celtics defensively in the first half, and the Celtics couldn’t stop Miami’s shooters. The lead ballooned to double-digits and extended as high as 26.

Predictably, the Celtics found a way to get back into the game. They trimmed the deficit to 12 in the third quarter and cut it to single digits again in the fourth after the Heat built it back.

But — once again — the Celtics dug themselves too deep a hole. Duncan Robinson buried a late 3-pointer, and Bam Adebayo converted a pair of buckets that pushed the game out of reach. A defeated Celtics team didn’t foul or call timeout down the stretch.

The Heat really hurt the Celtics with their long-range shooting, but Butler was the player who stabilized Miami when the fourth quarter got a little dicey and helped lift them to a victory. The Heat play well collectively, but Butler is in charge of the offense down the stretch. That system seems to work beautifully.

Every time the Celtics go down by 20 and try to pull off a miraculous win, the sentiment after the game is, “they can’t keep doing this,” and that sentiment continues to hold true. The 32-point rally against San Antonio was a once-in-a-season moment that the Celtics seemingly try to replicate every night, but the Heat have the personnel and defensive IQ to keep Jayson Tatum from scoring 60 points (he finished with 29 points on 11-for-16 shooting on Sunday, but they were hard-fought points).

With the loss, the Celtics are now two games behind the Heat in the standings. The Celtics still have another game against the Heat on Tuesday, which could give them the tie-breaker, but all signs point to the play-in game at this stage.

1. Robert Williams left the game at halftime as he continued to deal with a painful case of turf toe. Speaking to reporters postgame, Brad Stevens said he isn’t sure how the Celtics will proceed with Williams, but he anticipates “challenges ahead.”

“We may have to sit him,” Stevens said. “I don’t know what the deal is right now. That’s obviously something we’re going to have to manage because I think I played Tristan about 15 straight minutes there in the second half.”

2. The Celtics recaptured some energy in the second half with a youthful lineup that included Aaron Nesmith, Payton Pritchard, and a surprise addition: Carsen Edwards. That group cut into the lead a bit before the Heat seemed to figure out how to counter it. Most importantly, however, that trio appeared to galvanize the rest of the team.

“I almost threw Tremont in there just to be as small and fast as possible in this league,” Stevens said (it was unclear if he was kidding). “But I think ultimately, Carsen has great skill. Carsen’s not afraid to get into people on the defensive end. He’s physical, even though he’s small. And I thought he did a good job when he was in.”

How much that youthful energy will matter is a little unclear, since the Celtics probably won’t be willing to get too creative with their lineups in the postseason. On Sunday, however, Edwards’s boost off the bench was a nice change of pace after two lethargic quarters.

3. The Celtics’ 3-point defense has been particularly worrisome recently, but it has been uncharacteristically bad all year. Under Brad Stevens, the Celtics have historically been a good defensive team, particularly at limiting opponents from deep.

“We’re slow to react to the ball moving and we’re not quite on a string at the way that a small team needs to be,” Stevens said. “Last year, we were a little bit bigger, but we were better with our ball pressure and quicker into air space of shooters. This year, we’re a step slow.”

4. We’ve said it repeatedly, but Kemba Walker’s good health makes the Celtics’ offense much more dynamic. Having a quick, shifty point guard who can score at all three levels makes the Celtics’s offense much tougher to contain. On Sunday, he scored 18 points on 5-for-12 shooting thanks to eight trips to the free-throw line. As the Celtics were rallying, his ability to collapse the defense was particularly important.

The glass-half-full view of the Celtics is that Walker, Aaron Nesmith (16 points, 5-for-9 shooting), and Evan Fournier (30 points, 11-for-16, 7-for-11 from 3-point range) have looked like major contributors over the last few weeks.

The glass-half-empty view, of course, is that the Celtics got 64 efficient points from Walker, Nesmith, and Fournier and still couldn’t beat the Heat. Jaylen Brown’s return from a sprained ankle will help. How much it helps remains to be seen.

5. The Celtics and Heat feel like teams going in opposite directions. The Heat have now won seven of their last 10 games, and no team will want to face last year’s Eastern Conference champion in one of the early rounds. With 3-point shooters dotted all over the court, a go-to scorer in Butler, and a Defensive Player of the Year candidate in Bam Adebayo, the Heat have all the makings of a tough out in the postseason.

The Celtics’ defense, meanwhile, keeps getting battered, and they can’t seem to muster enough energy to fix it until the second half. Assuming they end up in the play-in game, no team in the upper echelon of the Eastern Conference will be particularly concerned about the Celtics.

A reporter recently asked Jimmy Butler if he was aware how difficult Miami’s schedule was down the stretch, with two games against the Celtics and one against the Sixers.

“I don’t know,” the reporter answered. “I’m just saying, there are challenges.”

“Maybe if your sorry ass was on our team it’d be tough, but I think we’ll be just fine,” Butler said.

Clearly, Butler wasn’t worried about the Celtics. It’s hard to imagine other teams in the East feel differently. 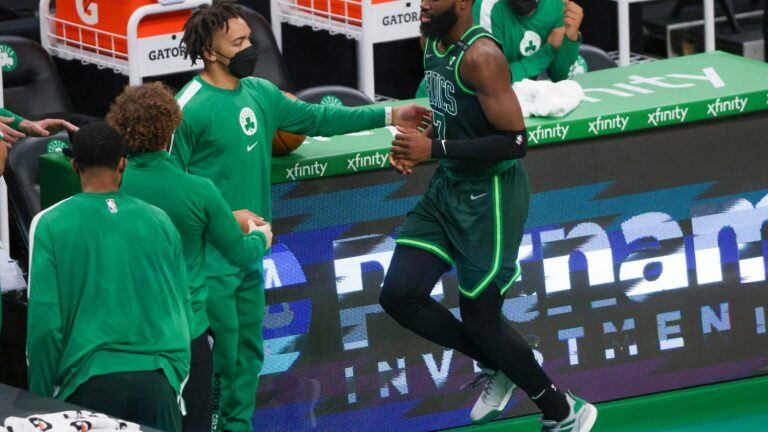