Tommy Heinsohn died in November at 86, and Celtics play-by-play announcer Mike Gorman is still struggling with the loss of his friend and colleague.

Gorman spent 40 years calling games with Heinsohn — the longtime Celtics player, coach and broadcaster. On Sunday, the Celtics honored Heinsohn’s legacy with a video tribute prior to their game against the Miami Heat. On the NBC Sports Boston broadcast, Gorman was asked what this season has been like without his longtime broadcast partner.

Gorman paused for a second, seemingly to gather himself.

“Empty, in a lot of ways,” Gorman said. “It has no reflection on the guy standing next to me.”

Gorman nodded to Brian Scalabrine, who has taken over Heinsohn’s color commentary duties, then he continued.

“But yeah, 40 years of doing something with somebody and then to suddenly have it stop, it’s been difficult. I won’t lie to that. It’s very difficult for me to get through that piece you just saw there. You and I, Abby, we’ll have to sit and cry in the corner and let [Kendrick Perkins] and [Scalabrine] talk about the game.”

The Celtics played a tribute to Heinsohn on the Jumbotron before the game.

We miss you, Tommy ☘️💚 pic.twitter.com/t7BTWCMcta

“I want to thank you all,” Heinsohn said at the end of the tribute. “You’ve made my life fun, interesting, challenging, and I wouldn’t have missed it for the world.”

Scalabrine noted how much he misses picking Heinsohn’s brain at media dinners before games. Gorman added that he misses how Heinsohn used to elbow him in the ribs every time a shot went up, but he struggled to get through his anecdote.

“It’s still really difficult for me to talk about it,” Gorman said. “I don’t want to bail out on you here, [Abby], but it is really difficult to talk about. I fully expect to see him walking in the building at some point and this has just been a bad dream, but we’ll just keep on keeping on.”

After the game, Jayson Tatum was asked to reflect on meeting Heinsohn after he joined the Celtics.

“I can remember that just that time I got to sit down with him,” Tatum said. “Just listening to some stories, advice of his, I think last season or my second season. Obviously, once I got with the Celtics, I just got a much better understanding of who he was, what he accomplished, and what he meant to the Celtics. Because I didn’t know as much before I got here. I’m just thankful that I was able to share some time with him [my] first couple years in the league.” 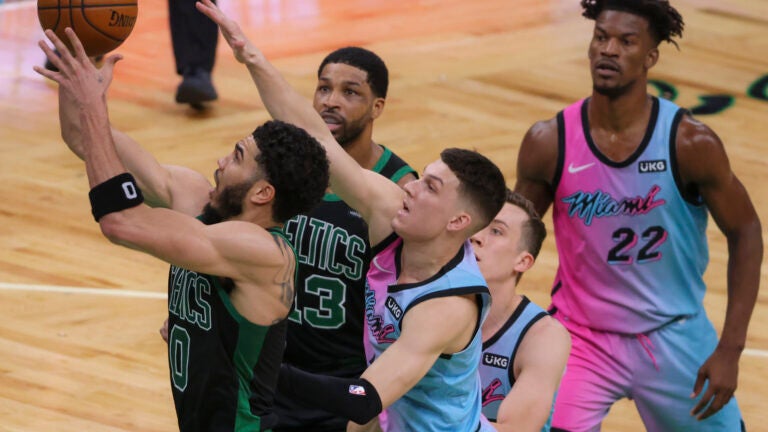