The Celtics announced a devastating blow to their playoff hopes on Monday: All-Star wing Jaylen Brown will miss the rest of the season with a torn ligament in his left wrist.

Brown made his first All-Star team in February and averaged career-highs across the board this season — 24.7 points, 6.0 rebounds and 3.7 assists, and he finished the season with 48.4/39.7/76.4 shooting splits.

Here’s what you need to know about Brown’s injury and what it might mean to the team.

The injury could take some time to heal.

Brown suffered a torn scapholunate ligament in his left wrist. That same injury sidelined Romeo Langford until the beginning of April this season — nearly six months.

Per multiple medical sites, surgery to repair a torn scapholunate ligament generally requires a 3-6 month recovery. If Brown undergoes surgery this week, he could optimistically be back in action by August and pessimistically by November or December. In either case, Brown will likely have time next season to work his way back for the playoffs.

Some good news: The injury occurred in his non-shooting wrist. Langford wasn’t so lucky.

Brown has been nursing the injury for a while.

Per Adam Himmelsbach of the Globe, Brown has been dealing with the injury for a while and recent imaging showed the tear.

The injury may have occurred in the closing seconds of the Celtics’s loss to the Oklahoma City Thunder last month. Brown back-cut a Thunder defender and absorbed contact to go to the free-throw line, but he landed badly on his wrist and remained on the floor in obvious pain afterward (the photo above this article is from that incident).

Here’s my best guess for when Jaylen Brown’s injury occurred. With 28 seconds left in the Thunder game. He said he was fine after the game, played three games afterward, even lit up the Hornets the night after this. But he clearly hurt the left wrist here. pic.twitter.com/0q4t7Fl9KG

Brown also held his wrist following a fall against the Los Angeles Lakers earlier in the month, which would line up with reporting from the Boston Herald’s Mark Murphy that placed the injury in mid-April. The Celtics took on the Lakers on April 15.

Jaylen Brown had been grabbing at his left wrist since April 15 after an awkward fall against the Lakers. But that tumble against OKC seemed to bother him even more. https://t.co/VenjzRZtVg pic.twitter.com/g3SXhJc3Lm

Still, if Brown’s fall against the Thunder didn’t injure his wrist, it certainly appeared to exacerbate things.

Brown is a tough player. In 2018-19, he dealt with a hand injury for the first few months of the season that made catching and releasing the ball painful and said nothing about it until he was asked point-blank about the padding he wore.

A torn ligament in his wrist is, of course, a much more serious injury.

Here are the numbers without Brown.

The Celtics outscored opponents by 1.1 points per 100 possessions in Brown’s minutes on the floor this season, per Cleaning the Glass. That total is in the 58th percentile league-wide, but Brown’s minutes have been a negative every year since the 2017-18 season (when they were the highest on the team). Brown was also a positive without Tatum on the floor — an achievement this season when Tatum has the highest on/off numbers on the team (aside from since-departed Jeff Teague and Daniel Theis).

On/off numbers have flaws, but it’s probably worth noting that Brown’s excellent season hasn’t always been a perfect predictor of Celtics’s success — they are 10-10 when Brown scores 27 or more, and 5-5 when he doesn’t play.

That’s not an indictment on Brown’s impact. This year’s iteration of the Celtics are just wildly unpredictable.

The Celtics probably don’t have the firepower without Brown.

Now the Celtics will likely have to win a play-in game without Brown. If they do, they will face one of the Nets, Sixers, and Bucks.

Maybe Jayson Tatum catches a heater and leads the Celtics on a spirited run. Maybe the Celtics gain a little momentum in the final few games as Kemba Walker continues to impress, and as Aaron Nesmith and Payton Pritchard continue to familiarize themselves with the rotation. Maybe Evan Fournier’s recent surge is sustainable and the Celtics can find a little bit of life as an offensive juggernaut — in 348 possessions without Brown on the floor, lineups with Fournier and Tatum have outscored opponents by 7.1 points per 100 possessions.

None of that, however, is likely to carry the Celtics past the first round without Brown. He was a deserving All-Star and enjoyed an impressive season as one of the Celtics’s unquestioned leaders. They will miss his contributions on both ends, and it’s difficult to imagine any kind of sustained postseason success in his absence.

If there is a silver lining for the Celtics, one of their best players now gets a little extra time with his feet up rather than grinding his way through a playoff run without much hope. That might be necessary relief for Brown following a grueling stretch of basketball dating back to the bubble in Disney World.

For everyone else? The postseason outlook is grim. 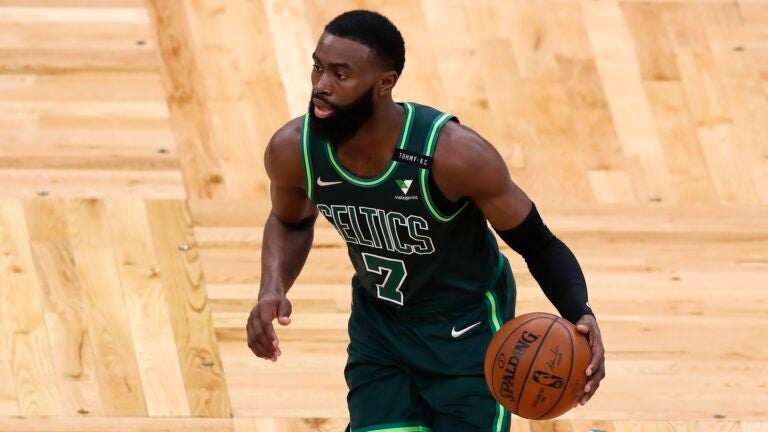 Celtics’ Jaylen Brown out for season with torn ligament in wrist, will require surgery