The 2020-21 season hasn’t been normal for the Celtics, but they’ll get some sense of normalcy when they play their first home games of the playoffs.

TD Garden will have an increased capacity for Games 3 (May 28) and 4 (May 30) of the Celtics’ first-round series against the Nets, with Game 4 hosting fans “at near full capacity,” the team announced Friday. The team didn’t specify the percentage of capacity for either games.

The announcement of increased capacity comes after Massachusetts Governor Charlie Baker announced Monday that the commonwealth would be lifting COVID restrictions beginning May 29, the day between Games 3 and 4.

While Baker’s announcement allows all local sporting venues to be at full capacity starting May 29, Celtics president of basketball operations Danny Ainge said in an interview on 98.5 The Sports Hub’s “Toucher and Rich” Thursday that they needed clearance from the NBA before selling extra tickets.

As for the Bruins, it’s unknown when they’ll allow more than 25 percent capacity for their games at TD Garden. Game 7 of their first-round series against the Capitals is scheduled for Thursday, May 27. They hold a 2-1 series lead entering Friday’s Game 4 and are scheduled to host Game 6 on May 25, if necessary.

With fans allowed in TD Garden for Games 3 and 4, it will mark the first time that Kyrie Irving will play in front of his old team’s home fans since leaving the Celtics in 2019.

Nets CEO John Abbamondi hinted their team could host roughly 10,000 fans for Saturday’s Game 1 between the Celtics and Nets. 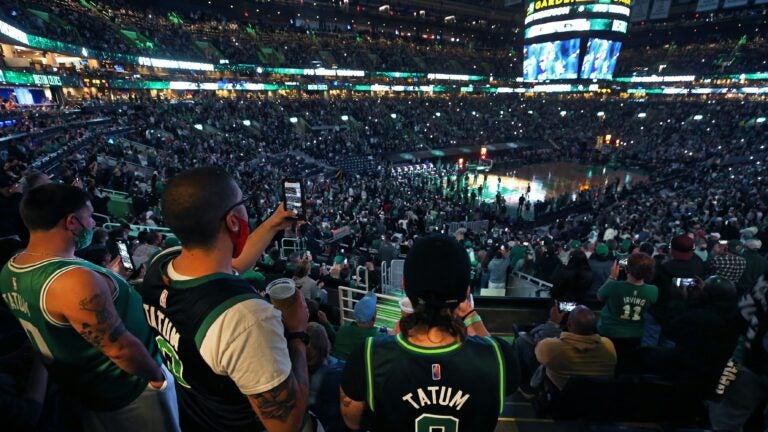