The Red Sox defeated the Blue Jays on Thursday, 8-7. Boston took the lead in the 9th inning thanks to J.D. Martinez’s go-ahead two-run home run.

Tonight, the Bruins host the Capitals in Game 4 of the two teams’ first-round playoff matchup at 6:30 p.m. Boston leads the series 2-1.

Tomorrow, the Celtics face the Nets in Game 1 of the playoffs at 8 p.m.

And also on Saturday at 8 p.m., the Revolution face the Red Bulls at Gillette Stadium.

Stevens candidly acknowledged earlier in the week that Brooklyn, the star-studded second seed in the Eastern Conference, has an advantage on paper.

Perkins, responding on ESPN in a Thursday segment, criticized Stevens.

“Brad Stevens, if you love Brooklyn that much, why don’t you go coach them?” he said.

“Listen, I played for the Boston Celtics for eight-and-a-half years,” Perkins continued. “I know the definition. It’s the ‘City of Champions.’ They have something that’s called ‘Celtic Pride.’ That wasn’t Celtic Pride, and no I wouldn’t want to play with Brad Stevens. I cannot go to war with a coach that is sitting up here praising and glorifying an opponent that I possibly could upset. How about going and saying hey, we’re going to be prepared, we’re going to be ready?”

Stevens, in the context of his pre-series comments, has maintained that Boston can pull an upset.

“I mean this is a fun challenge,” Stevens told reporters on Thursday. “Listen, [the Nets] are a heck of a team, but our guys are — we have some guys in here that have been through some big-time series before, and have raised their level to meet the moment on several occasions. So I’m really looking forward to it.”

“It was just disturbing,” Perkins added. “I tried to get down with Brad because people I know think he’s good with Xs and Os. But this right here took me over the top. I’m sorry, a lot of people may not like what I said, but I really don’t give a damn. That was just disturbing to hear.”

Trivia: Kendrick Perkins was drafted in 2003. What current NBA head coach was also selected that year?

Hint: Though he never played for the Celtics, he does have familial ties to the organization.

Despite losing to the Celtics, the Wizards still made it to the playoffs on Thursday:

On this day: In 1987, the Celtics defeated the Pistons 110-101 to take a 2-0 lead in the Eastern Conference Finals. Despite Isiah Thomas scoring a game-high 36 points, Boston prevailed thanks in part because of Larry Bird’s near-triple-double (31 points, 12 assists, nine rebounds).

Of course, the series’ drama was just beginning. The Pistons would rally once the series returned to Detroit, taking the next two games. It would culminate in Game 7 with a Celtics win, but only after some more Bird heroics in Game 5. 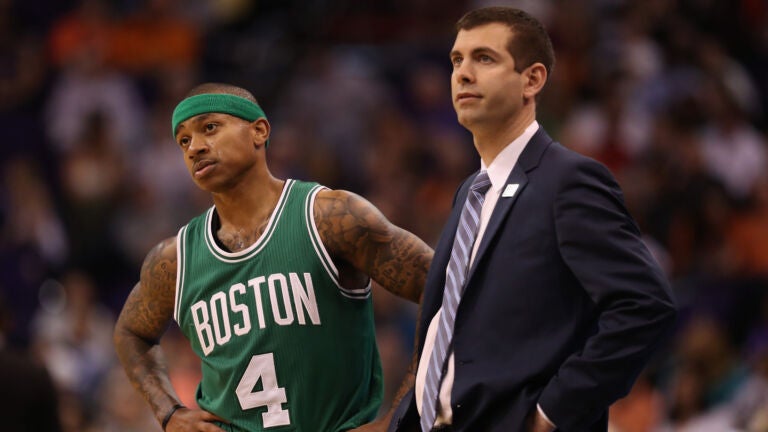 Here's what Brad Stevens said when asked about Isaiah Thomas