Make no secret about it, the Celtics are massive underdogs in their first-round series against the Nets.

Brooklyn is headlined by the 2021 version of a “Big 3,” which consists of former MVPs in Kevin Durant and James Harden and also has seven-time All-Star (and ex-Celtic) Kyrie Irving. While the three of them only shared the court in just eight games, that didn’t stop the Nets from going 48-24 this season, good for the second-best record in the East.

The Celtics, who earned the seventh seed after winning their game in the Play-In Tournament following a 36-36 regular season, know they’re the underdog, and Marcus Smart is embracing it.

“We know the odds are against us, we know what we’re up against,” Smart told reporters Friday. “This isn’t our first time being up against a Goliath of this matter and being underdogs, so we just got to come out there and play. All the cards on the table, no holding back. At this point, we have nothing to lose, so go out there and just have fun and do it.”

As Smart alluded to, the Celtics have found themselves in the underdog role in recent years. Despite holding the No. 2 seed in the East in 2018, the losses of Kyrie Irving and Gordon Hayward prior to the playoffs had analysts doubting if the Celtics could win a series, let alone make a deep playoff run. They defeated the Bucks in the first round and the 76ers in the second before falling in Game 7 to LeBron James and the Cavaliers in the conference finals.

Their head coach’s history as an underdog goes deeper than that. Celtics coach Brad Stevens made a name for himself at Butler by leading the mid-major squad to Final Fours in consecutive seasons (2010, 2011), losing in the title game both times.

Stevens knows that the margin for error is small, but he’s also excited for the tough task that awaits them.

Both Smart and Stevens gave the mindset the Celtics need to have if they have any hopes of doing what some might say is impossible.

“We’ve seen it — especially in the playoffs, time after time — talent isn’t the one that always wins,” Smart said. “You just got to go out there and play. Now if we just go out there and lay down, then, of course, that talent becomes a problem even more.”

“In a lot of similar situations, we’ve been thought of in an underdog role back in our days at Butler,” Stevens added, “but we never thought of ourselves that way when we are in our locker room talking to each other, which is exactly the way we are here.”

Guard Evan Fournier, who the Celtics acquired at the trade deadline, also chimed in on what the Celtics have to do in order to pull off the upset.

“When you play the best teams in the NBA, you have to compete,” Fournier said. “You have to show them that everything they’re going to get is hard and that it’s going to be a long series. I think the key for us is the way we’re going to execute our game plan. And obviously, at some point, we’re going to have to make big-time plays.”

Fournier’s lone matchup against Brooklyn since coming to Boston is one he’d like to remember. Playing in his first game after testing positive for COVID-19, Fournier went 0-for-7 and scored two points in a Celtics loss on April 23.

If the deck wasn’t already stacked enough against them, the Celtics will be without star Jaylen Brown, who had season-ending wrist surgery earlier in May, and could be without center Robert Williams in Game 1. Williams is battling turf toe, which has kept him out of five of the last seven games and forced him to leave Tuesday’s game against the Wizards early. He’s listed as questionable for Game 1.

The Nets have won all three matchups between the two teams this season. The series tips off in Brooklyn on Saturday at 8 p.m. 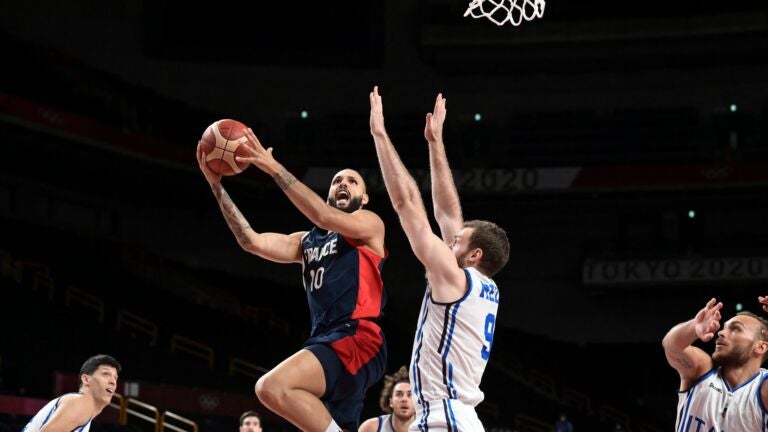