After struggling from the field in the first half of Game 1, the Brooklyn Nets came out throwing haymakers in the second game of their series against the Boston Celtics, claiming a 130-108 victory.

The Celtics were competitive for a few early minutes and looked solid on both ends.

Then Joe Harris exploded, burying his first four 3-pointers. The Nets took a double-digit lead, which expanded to 14 at the end of the first quarter and 24 at halftime. By the end of the third quarter, the Nets starters were all relaxing on the bench, while the Celtics contemplated the alarming statistic that 93 percent of teams who win the first two games of a series advance.

This could have gone to any of the Nets’s Big Three, but Durant gets the nod for a hyper-efficient evening paired with his rim protection. The Celtics had no answers for him (save for one nice possession by Robert Williams), and Durant showed up several times in the second half to reject shots around the rim.

Durant is an impossible cover under normal circumstances, but perhaps especially so when surrounded by players like Irving and Harden.

For the Celtics, nothing good. Few observers expected them to be competitive against the Nets in this series, and so far, few observers have been wrong.

1. The Celtics looked discouraged by Harris’s explosion in the first quarter and certainly weren’t as spirited in their effort as Game 1. Charles Barkley declared the series “over” and said the Celtics look like they are ready for their season to end.

But while many fans (and many members of the media) will point to effort in their analysis, the simpler explanation might be the best one: Without Jaylen Brown, the Celtics simply don’t have the firepower on either end to be competitive — let alone to have a chance to win — against the Nets. It took the Nets one half to figure out their chemistry, and while better teams with more stars available might make them work a little more, Brooklyn appears every bit as tough as its talent would suggest.

2. Once again, the Nets threw all of their defensive attention at Jayson Tatum, and the Celtics could do little to counter. Tatum finished with just nine points on 3-for-12 shooting before leaving the game in the third quarter after being poked in the eye by Kevin Durant, and he couldn’t re-enter. Brad Stevens said after the game that Tatum’s eye looked red and swollen.

3. Marcus Smart had one of the better stretches of the game for the Celtics in the third quarter, knocking down four 3-pointers in fewer than 90 seconds. The game was far out of reach, but Smart’s heat-checks were perhaps the only time the Celtics showed any life in the second half before the reserves entered for garbage time.

4. At one point in the first half, as the contest was getting out of reach, TNT showed a devastating graphic for the Celtics.

5. A weird note from the first quarter: The Barclays Center has a strip around the middle of the arena that allows in some natural light.

On Tuesday, the first time an NBA game took place in Barclays as late in the year as May 25, the natural light posed the Celtics a bit of a problem.

Given that the Celtics played their best basketball in the first six minutes, it’s difficult to imagine that the light made much of a difference. 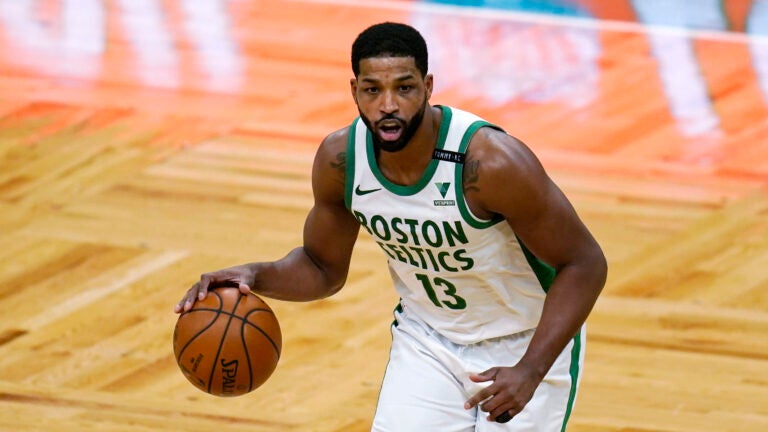