A disappointing Celtics season petered out on Tuesday, as the supercharged Nets decimated the Celtics with 3-pointers in the fourth quarter of a 123-109 Game 5 victory.

The next day, the Celtics shocked the basketball world by announcing President of Basketball Operations Danny Ainge would step down from his role. Ainge will be replaced by Brad Stevens, who will lead a search for his own replacement as head coach.

After one of the stranger campaigns in recent memory and a dizzying start to the offseason, the Celtics have plenty of reasons for concern. The team simply didn’t look that good for lengthy stretches. They lost several truly embarrassing games. A salary crunch is likely coming this offseason, and the Celtics may not have sufficiently proven themselves as a potential contender to warrant the amount of money ownership would need to pay to keep the team together.

On top of all that, of course, is a new President of Basketball Operations tasked with building a team capable of winning a title from pieces that were bounced in the first round.

Still, plenty of reasons for optimism exist. Here are five of them.

Jayson Tatum is on an MVP trajectory.

Tatum’s numbers were marred by a month-plus battle with post-COVID symptoms, and he still averaged career highs — 26.4 points, 7.4 rebounds, and 4.3 assists per game.

Schematically, the Celtics figured out ways to free him from nearly any type of defense. In single coverage, Tatum scored over smaller defenders, ran around bigger defenders, and maneuvered skillfully around screens. When teams sent doubles, Tatum either sped up his decision-making or passed out of it, creating an advantage elsewhere. He used his strength to his advantage, crashing to the rim and drawing free throws — a career-high 5.3 per game in the regular season and 9.8 per game against the Nets.

As the season stretched on, Tatum’s numbers became increasingly absurd. He scored 60 in a comeback victory over the Spurs, and every point was necessary. He dropped 50 in the Celtics’s play-in win vs. the wizards. He put up 50 more to beat the Nets in Game 3. He scored 40 in Game 4 even after the Nets resumed their “Defend Tatum With Everyone At Once” game plan that they inexplicably abandoned in Game 3.

Teams can’t seem to defend Tatum 1-on-1 anymore, which is perhaps the most positive development for the Celtics in recent memory. To become true contenders after missing on Ainge’s dream of pairing Kyrie Irving with Anthony Davis, the Celtics needed Jayson Tatum to develop into an incandescent superstar.

Tatum is on that rare trajectory. The Celtics now employ a player whose archetype simply doesn’t come along often: A young top-10 player with MVP potential. Any conversation about next year’s Celtics (and, if they are lucky, any conversation about the Celtics over the next decade) starts with Tatum’s eye-opening promise. Building around him will be Stevens’s first task, but perhaps nobody knows better than Stevens the archetype of a successful pairing.

Jaylen Brown hit all of his benchmarks.

Brown’s wrist injury essentially eliminated any opportunity for the Celtics to be competitive in the postseason, but he was a deserving first-time All-Star. Like Tatum, Brown averaged career highs in all of his counting stats, and he hit a career-high 39.7 percent of his 3-pointers as well.

Where Brown goes from here is fascinating. He continuously improves season after season, although he is quick to note that his improvements sometimes have more to do with opportunity than hard work.

The Celtics now need to prove (again) that Tatum and Brown can be a winning combination. That duo led the Celtics to the Eastern Conference finals in 2019-20, but they struggled surrounded by a younger team this season. Can Stevens put the pieces in place around them for extended postseason success?

Healthy Robert Williams could be the third star the Celtics need.

One question the Celtics need to answer quickly is how they can acquire a third star to play with Jayson Tatum and Jaylen Brown.

Robert Williams raised a lot of eyebrows this season. Defensively, he improved by leaps and bounds — both literally and figuratively. He’s much less likely to bite on pump fakes, which makes him more intimidating as a rim protector. On the other end, he plays within himself and pressures the defense with his vertical spacing. He’s also a cerebral passer with an advanced understanding of how a play unfolds.

The two major questions loom: Can Williams stay healthy? If so, what kind of money will he command? He will be one of Stevens’s first negotiations as President of Basketball Operations, and it will be a complicated one with major implications for the franchise. Overpay for a player who can’t stay on the court and you might deeply regret it. Fail to come to a deal and you might be forced to overpay to keep him next season.

Young players sometimes need a little extra time to develop physically. Williams played 52 games after managing just 32 and 29 games in his first two seasons. As his body develops, perhaps he can stay on the floor with more consistency.

If he can, the Celtics might be cooking with something.

“The kid has a lot of potential,” Tristan Thompson said on Tuesday. “I see like a Tyson Chandler-type of player where he can make an impact defensively. He has the potential to be an all-defensive type of player with his length and fast-twitch motions and the way he’s able to block shots, and contest around the rim. He has that kind of potential.”

The fact that Nesmith, Pritchard and Langford contributed anything at all is a mild positive for the Celtics given their lack of time to prepare. Nesmith and Pritchard, in particular, were thrown into the fire — drafted in November just a couple of weeks before the season. Langford, meanwhile, finally returned in April after undergoing wrist surgery and a battle with COVID-19.

“I told Romeo, ‘You can have the wrist thing, you can get COVID, you can miss the first five months of the season, but you won’t remember anything about your second year if you finish super strong,'” Stevens said. “And he did other than that. So he’s got to build off that momentum.”

Nesmith crashed his way through the regular season and started to catch fire as a shooter late. Pritchard worked hard and earned minutes early, which he never relinquished.

All three players defend. Langford and Pritchard can both be secondary playmakers. Nesmith and Pritchard can both shoot. Nesmith was better off the dribble than advertised. As the Celtics look to bolster their bench, they will likely need proven veterans, which could cost some of their promising pieces, but whichever young players remain could be contributors with a real offseason. Speaking of..

The Celtics get a real offseason.

If there was a common theme to the Celtics’s postgame comments on Tuesday, it was that they needed a break. Kemba Walker needs to re-evaluate his knee. Jayson Tatum called Team USA basketball an “incredible opportunity” but wasn’t certain if he would participate. Jaylen Brown, of course, will continue to rehab. So will Robert Williams. The Celtics limped to the finish line and bowed out with plenty of bruises.

As Marcus Smart put it: “You can only do so much with what you’ve got.”

Whether or not fans are willing to acknowledge exhaustion as an explanation for their season, the Celtics were undeniably ground down by a grueling season, which was preceded by grueling months in the Disney World bubble.

Next season is a fresh start. Look no further than the top-seed Philadelphia 76ers for a team that underperformed catastrophically only to return stronger with a new coach, a new front office and an improved roster around an MVP candidate.

If next season starts poorly, the Celtics might have some reason to panic. For now, however, Smart may have the best advice for Celtics fans.

“I don’t think it’s nothing to stress about,” Smart said on Tuesday. “We probably have a lot of fans, just a lot of people on the outside probably thinking this and that, but three out of four years we’ve been to the Eastern Conference Finals. We’ve been to the playoffs every year, and this is one year when we didn’t have everybody. We didn’t have a full year, and it affected us.

“I think we’re all right, but that’s not my decision to make.” 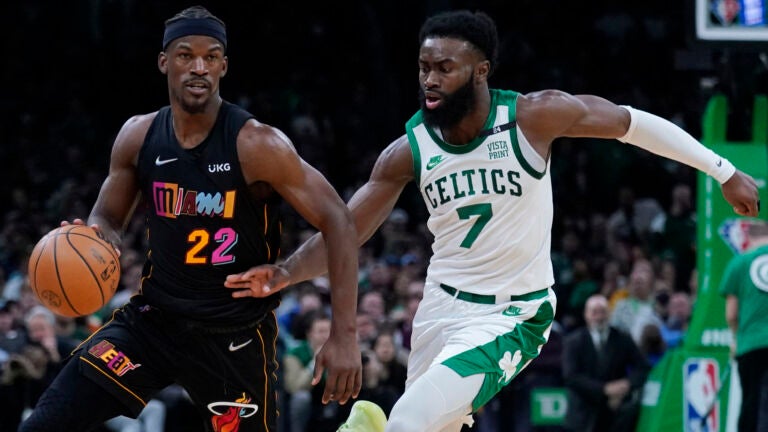