Neither the NBA nor the Boston Celtics could let basketball fans catch their collective breath this week.

After a week full of injuries, Chris Paul ending up in the COVID-19 protocol with the Western Conference Finals approaching, and Rick Carlisle potentially being added to the Celtics coaching candidates list, Brad Stevens made his first splash as president of basketball operations.

The Celtics traded ailing guard Kemba Walker, the No. 16 overall pick in the 2021 draft, and a 2025 second-round draft pick to the Oklahoma City Thunder for Celtics fan-favorite Al Horford, a 2023 second-round pick, and a young center named Moses Brown.

Though he’s the least known name on this list, Brown might be the most relevant one for the Celtics’ future. That seems like a surprising development given how the 21-year-old center’s NBA career began. Brown came into the NBA undrafted out of UCLA and struggled at first to find his footing in the league.

But his performance for the rebuilding Thunder last year makes Brown an intriguing young option at center for a team that needed better, more consistent interior play last season. He even showed glimpses of what he can do against the Celtics themselves.

Here are a few things to know about Boston’s newest young big man.

He was an unlikely high school star

Brown didn’t exactly come into high school with the kind of notoriety a Mikey Williams, Jalen Green, or Bronny James did.

But a six-inch growth spurt helped change that.

He grew from 6-foot-8 to 7-foot-2 as a sophomore and turned into a force for Archbishop Molloy High School in Queens, New York while playing alongside Cole Anthony – now a point guard for the Orlando Magic.

Boston will be his fourth team in three years.

Brown starred at UCLA, making the Pac-12’s All-Freshman team during his only college season. But he went undrafted in the 2019 NBA Draft.

He saw one game of action for the Houston Rockets during the 2019 Summer League before eventually signing a two-way contract with the Portland Trailblazers for his rookie season. He saw little action, averaging just 3.7 minutes and 1.2 points per game during his nine games.

The young center then latched on with the Oklahoma City Thunder on another two-way contract, starting the season in the G League. He earned All-NBA G League First Team after season averages of 18.5 points, 13.9 rebounds, and 1.9 blocks before joining the rebuilding Thunder full-time.

He had one of his best games against the Celtics.

Brown played 42 games for the Thunder in his second year, making the first of his 32 starts on March 14. He notched his first double-double two days later against the Chicago Bulls, scoring 20 points and grabbing 16 rebounds.

But he saved one of his best performances for the Celtics two weeks later.

Brown scored a (then) career-high 21 points and recorded his current best mark of 23 rebounds in the loss to Boston. The 23 rebounds tied Steven Adams for the highest single-game total in franchise history. He also set the team record for rebounds in a half with 19 and posted the second-fastest double-double in Thunder history (8 minutes, 11 seconds).

Only his final game of the season against the Los Angeles Clippers – 24 points, 18 rebounds, seven blocks – earned him a higher game score, according to Cleaning The Glass. 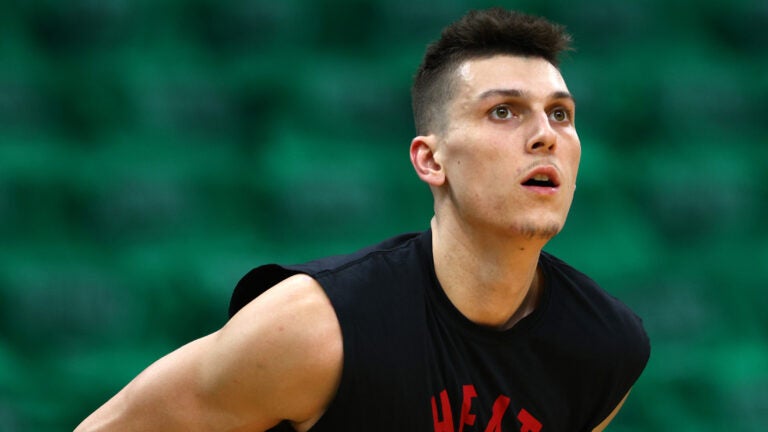