The Celtics made things official with a few players on Friday.

Schroder is obviously the biggest name of the Celtics free-agent signings this offseason. The point guard reportedly agreed to a one-year, $5.9 million deal with the Celtics on Tuesday. However, that deal is significantly less than the four-year, $84 million extension he turned down from the Lakers this past season.

While Schroder’s lone season in L.A. wasn’t the best (he averaged 15.4 points per game on 43.7/33.5/84.8 shooting splits), he joins the Celtics just two seasons after he finished second in Sixth Man of the Year voting with the Thunder.

Over the last five seasons, Schroder’s averaged at least 15 points per game in each of them, scoring a career-high 19.4 points per game with the Hawks in the 2017-18 season.

So, with all of that in mind, it seems like the Celtics look Schroder for a bargain. Celtics president of basketball operations Brad Stevens is happy to have Schroder.

“We are really excited to welcome Dennis and his family to Boston,” Stevens said in a statement. “Dennis is a high-level player and competitor, who has consistently impacted winning with his play on both ends of the court.”

Kanter is the other NBA vet the Celtics have signed so far this offseason. This also won’t be Kanter’s first stint in Boston. The center played with the Celtics for the 2019-20 season, averaging 8.1 points and 7.4 boards in roughly 17 minutes per game.

Following that season, Kanter was traded from the Celtics to the Trail Blazers, where he averaged 11.2 points and 11 rebounds per game mostly coming off the bench this past year.

Kanter and the Celtics reportedly agreed to a one-year deal worth the veteran’s minimum, making it another potential bargain deal that Stevens could be happy with.

“Enes has a unique ability to both score and rebound,” Stevens said. “Beyond his on-court contributions, he is a great teammate. We are thrilled he chose to return to Boston.”

Hauser and the Celtics agreed to a two-way deal, meaning he’ll be splitting time between the Celtics and their G-League affiliate, the Maine Celtics, this season.

Hauser, who was an undrafted free agent, is currently playing for the Celtics in the Summer League. He’s averaging 9.7 points per game while shooting 40% from 3-point territory through three games, including a 21-point game on Thursday.

The 23-year-old forward joins the Celtics after scoring 16 points per game with Virginia last season. While his lone season at Virginia (he played at Marquette for three years prior) wasn’t enough to get him drafted, Hauser likes the spot he’s in now.

“I didn’t get drafted, obviously,” Hauser told reporters. “Then right as the draft ended Boston called and they said ‘We’re going to offer you a two-way,’ and I got 10 minutes to kind of decide.”

“They said I had a really good workout,” Hauser added. “They said they weren’t sure if I was in their range or not in the draft. But I ended up here, so sort of a blessing in disguise, I guess. So, I’m happy with the fit. And I’m glad to be in Boston.”

Schroder, Kanter, and Hauser are just a few of the additions the Celtics have made this offseason. Boston’s traded for Al Horford, Josh Richardson, Kriss Dunn, and Bruno Fernando as well. 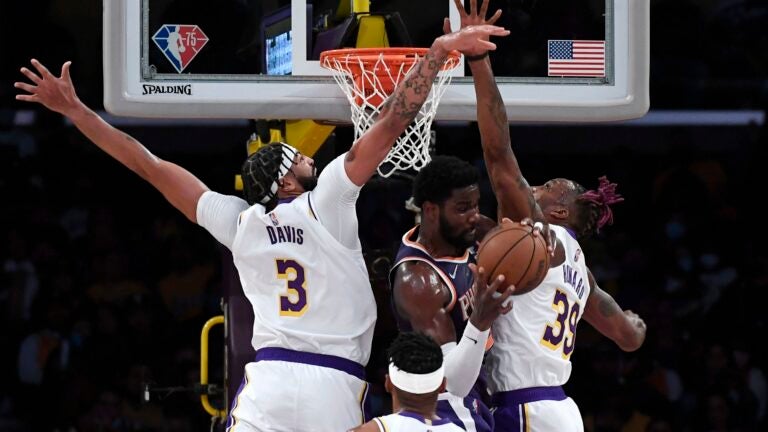