She’s never scored a point or dealt out an assist, at least in the basketball sense. She doesn’t wear a number to someday retire to the TD Garden rafters. But anyone who has come into her professional orbit will tell you that Heather Walker has long been one of the Celtics’ brightest stars.

Walker’s official title is vice president of public relations, but it might as well be liaison for everything. During her 15 years with the Celtics, her assorted duties include, but are hardly limited to, publicizing brand partnerships, making sure players’ families are taken care of during games, and organizing community relations events.

“I have a weekly meeting of the senior staff in the organization,” said Celtics president Rich Gotham, “and we go around the horn about what everyone has on their plate. Heather will come in with a huge binder and 50 things she’s got up in the air. It’s like, ‘How is she doing this?’ And she never drops a plate.

“And not only does she know every player who has been through here and their family and their significant other, but she also knows their aunt, their uncle, their kids, their dogs. She was born for the job that she has.”

Maybe you’ve seen her when a notable moment happens for the Celtics. She’s the smiling blonde holding a notepad or three, knowing what comes next, and what comes next after that, for multitudes of people and departments.

“Heather is really positive, really energetic, hard-working,” said Brad Stevens, the Celtics’ president of basketball operations. “She’s a person that our players all gravitate to because she’s involved with them in a lot of their interests off the court. She helps in so many different ways.”

Now Walker is the one who needs help, not just for her but as usual to help others. In July, she was diagnosed with glioblastoma, a rare and aggressive form of brain cancer. On July 20, eight days before her 50th birthday, she underwent nine hours of surgery.

Upon diagnosis, Walker and her friends created the Move 4 Heather Challenge to support the Heather Walker Glioblastoma Fund at Dana-Farber Cancer Institute, where she is being treated. All proceeds will directly benefit Dr. David Reardon’s glioblastoma research.

Here’s how it works: Do something that is on your bucket list, like, as the Challenge suggests, “diving with sharks or even something small like trying a new food.” (Walker, whose achievements include kayaking from Boston to Provincetown with a group of eight, including her husband Stephen, to raise money for the Pan-Mass Challenge, is described as a free spirit by anyone asked about her.) Take a photo or video while accomplishing the item and post it on social media using the hashtag #m4h. Make a donation to the Heather Walker Fund, and challenge three friends to participate and donate.

“As much as they tell you what you’re going to go through with this, you don’t know until you experience it yourself,” Walker said. “That’s the scary thing. Glioblastoma Stage 4 cancer is not anything to mess around with.

“I’ve become a little obsessed with this Glioblastoma Thrivers and Strivers website. It’s predominantly set up for the long-term survivors, people that are doing really well, but there are a lot of people on there with inoperable tumors, who are going through a lot of troubles. Because this is inherently how I am, I want to take on other people’s problems, so when I see that, I’m like, ‘We need to help these people.’

“I’m so fortunate for having the whole tumor removed, for being in chemo radiation [a cycle of five days of chemotherapy followed by 23 days off], and being at a place where I can do things like drive a car now and feel good about my situation. But there are a ton of people who are struggling and need our help, and that’s why we’re doing this.”

Glioblastoma is among the most vicious cancers, and most underfunded. Per 2019 data from braintumor.org, the five-year survival rate is only 6.8 percent, and the average length of survival is 12-18 months. Despite being identified in 1920, the FDA has approved only four drugs and once device for treatment of glioblastoma.

Walker’s doctor is trying to change that. Reardon, clinical director, center for neuro-oncology at Dana-Farber, is overseeing a trial at MIT using immunotherapy to combat glioblastoma by creating a vaccine, called Neovax, to eradicate it. The clinical trial is funded directly by philanthropic means.

“Glioblastoma so far, despite a lot of effort and work, has proven to be one of the cancers that does not respond well to immunotherapy,” said Reardon. “We are making progress in gaining some insight. That work has led to a clinical trial approach that Heather is now involved in where we are combining two forms of immunotherapy together. One can help make the other more effective and active and in tandem.”

The effect of Neovax would be to build up Walker’s immune system, so if the cancer returns, “my body will fight it,” she said. She is waiting for her vaccine to be made.

“At this point, it’s been wait and see on how my body responded to everything it’s gone through so far,” she said. “During my last meeting with Dr. Reardon, he was super-positive. My scan was clear, they got all the tumor out, my body has responded well to the chemo and radiation. So everything is good today.”

Walker is never far from the minds of her friends and colleagues with the Celtics. She was in attendance and saluted on the scoreboard during the season opener. After her surgery, the team sent her a birthday video that she saw only recently. It was 45 minutes long, featuring Gerald Green, Kevin Garnett, Shaquille O’Neal, and Paul Pierce.

“This is a very scary thing. You feel so alone. You’re in this alone,” she said. “And they’ve made me feel like I’m not alone, I’m part of the team.

“This is all so hard, but it’s my purpose in life. I swear, if I could take the world and rid it of cancer, I would do anything. My lesson to my girls [Sammy, 12, and Taylor, 10] has always been that you get more meaning out of life if you give to others. I’ve felt so much love, from the Celtics and so many other people. It’s overwhelming. But I can’t imagine doing anything else right now.” 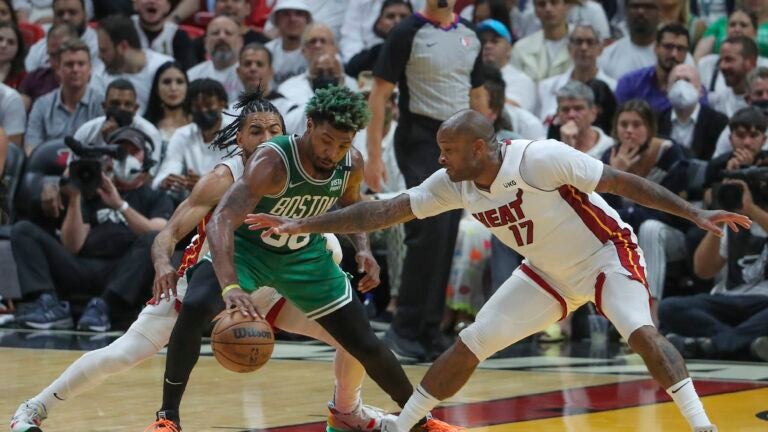