Here are the takeaways as the Celtics snapped their skid and beat the Magic on Wednesday behind Al Horford, Jaylen Brown, and a big third quarter.

1. For everyone around the Celtics — up to and including president of basketball operations Brad Stevens — the last two days were filled with speculation following Marcus Smart’s comments about Jayson Tatum and Jaylen Brown.

Per ESPN’s Adrian Wojnarowski, the Celtics tried to deal with the comments internally, but the meeting was unproductive.

After the game, Ime Udoka, Al Horford, and Brown all categorized the meeting as a team dinner, where the coaching staff gave players 30 minutes to themselves beforehand. Believe who you want to believe: The people who were there or one of the most plugged-in reporters in any sport.

Whatever happened, one truism remains perhaps the most accurate way to sum up NBA drama: Winning solves everything. When the Celtics win, they feel better. When they feel better, they smile at each other on the court and are more understanding in post-game press conferences.

“In the midst of trying to win games, it’s something that we probably didn’t need,” Brown said of Smart’s comments. “But we all communicate and talk to each other. So we’re always trying to find ways to win and I’m open to any and everything when guys bring it to me, coaching staff.”

“We definitely have spent a lot of time with each other, which makes it good to be able to talk to somebody but also it’s a lot of ups and downs that you go through that we’re family and things like that,” he later added.

If the Celtics are willing to put those comments behind them, we probably should too for the time being.

2. The Celtics’ optimism in the midst of their struggles through eight games will either look deluded or prescient in a few months, but it’s a lot easier to believe them after wins.

“I think the biggest thing, and I told the guys, is making sure that we make the most out of this opportunity,” Al Horford said after Wednesday’s game. “I’m very grateful to be here with the Celtics and it doesn’t matter kind of what has happened in the past. We have an opportunity, now, this season, we have all the pieces that we need to be successful. So I just tell him to take advantage of this.

“When I look back on my long NBA career, I know there’s definitely some teams that are like ‘man if we could have,” or if this were to happen or that were to happen, you know, I don’t want to have any regrets.”

Horford knows something about disappointing teams. He was part of both the 2018-19 Celtics and their spiritual successors — the 2019-20 Sixers. He was then a little too good for a tanking OKC team that wanted a draft pick more than it wanted wins.

Little of the blame for this stretch deserves to follow Horford around, but perhaps it should come as little surprise that he was eager to move forward rather than dwell on Monday’s game.

“I felt like we took some steps there, and I’m looking forward to tomorrow,” he said, in response to a question about Smart’s comments after briefly discussing the team dinner. “We have our hands full obviously going against Miami, but that’ll be a fun matchup.”

Horford and the Celtics better be ready, because the Heat are a very different basketball team than the Magic.

3. It is worth taking a moment to give Horford his due. Before the season, his performance was expected to be a major swing factor. Nine games in, the team is 3-6 despite a throwback season for the versatile big man.

On Wednesday, Horford was excellent once again — 12 points, 12 rebounds, and seven assists. The assists were particularly interesting: Four of the seven came in transition as Horford ran the ball up the floor himself.

The role inversion worked on both ends on one assist: Horford did the work of dribbling the ball up the floor, which gave Jaylen Brown time to get into the post against Jalen Suggs. Horford lofted a pass to Brown, who scored while an overwhelmed Suggs committed a foul.

Per Cleaning the Glass, the Celtics’ defense has been 8.8 points per 100 possessions better with Horford on the floor, but his offense shouldn’t be ignored either. He has been brilliant, and if the rest of the Celtics ever catch up fully, a throwback Horford season would be a lot of fun to watch.

4. Jayson Tatum’s struggles continued — 4-for-16 from the floor, 1-for-6 from 3-point range. It’s difficult to nail down exactly what’s going on, since a lot of his shots aren’t bad looks. He started with a simple pick-and-roll jumper at the elbow (Horford, for the record, both made the pass and hustled over to set the screen — the man is a helper). Then he buried a step-back 3-pointer iso’d against Mo Bamba.

And then he went 2-for-14 the rest of the way. Tatum forced a floater, missed a corner 3-pointer badly, missed a pair of pick-and-roll pull-ups, and continued in that vein for several quarters.

5. If variety is part of Tatum’s problem, he could try following Jaylen Brown’s formula. All 10 of Brown’s made field-goal attempts were turn-around mid-range jumpers, 3-pointers, and layups. Most of the seven remaining were as well. Brown finished with 28 points on a tidy 10-for-17 shooting.

Brown’s offensive game isn’t always complicated — sometimes he simply runs around Cole Anthony and scores a layup — but it is increasingly refined. He’s strong and explosive, with a good handle, a good jumper, and nice touch around the rim — an All-Star formula.

“I think it’s a lot of pressure that everybody feels on them to perform and play,” Brown said. “They just have to come out and play basketball, and we’ll be fine.”

“Just come out and play basketball” sounds overly simplified, but it works wonders for Brown.

6. The Celtics may have dodged a bullet in the final quarter — after winning the third 31-10, they lost the fourth 23-17 and it could have been a lot worse if the Magic hadn’t shot 6-for-20 from the field in the period.

Again: They won’t get away with that against the Heat.

7. Aaron Nesmith played and scored his first points of the season on a straightaway 3-pointer — his only field-goal attempt of the game. The NBC Sports Boston broadcast noted that making his first shot of the season must have felt good, but three consecutive DNP-CDs must have been frustrating. Nesmith’s face after the garbage-time make was a little inscrutable.

8. The Celtics’ defense — 19th in the NBA — was suffocating against the Magic. Cole Anthony finished just 4-for-18 from the floor, and the Magic as a whole shot just 32.1 percent from the field.

“We’ve been in some shootouts this year where we didn’t play defense well, and then we had games where we really guarded well but didn’t shoot well,” Udoka said. “So it was good to put a semi-solid game together, especially over those last three quarters defensively. It’s something we have to rely on every night, whether the shots fall or not.” 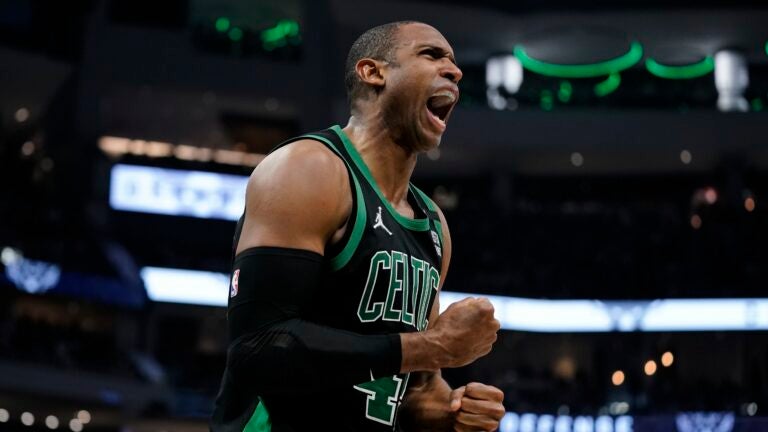 Celtics’ Al Horford upgraded to doubtful for Game 2 against Heat