A slow start to the 2021 season has many wondering if the Celtics have maxed out their potential with their current core revolving around Jayson Tatum and Jaylen Brown.

A new report from The Athletic Monday morning suggests Boston might be interested in shaking things up in a big way moving forward.

According to The Athletic’s NBA insider Shams Charania, the Celtics “have engaged in conversations” with the Philadelphia 76ers about trading for disgruntled point guard Ben Simmons.

The 6-foot-11 guard and former No. 1 overall pick has made headlines for attempting to force his way out of Philadelphia due to unhappiness about his role and has yet to play in a game this season.

Charania noted, per sources, that the discussions between the Celtics and 76ers are “fluid with no traction as of yet,” suggesting a deal is far from imminent.

Additionally, the cost of such a move would be high–higher, perhaps, than Boston would be willing to pay.

“Any potential Simmons deal with the Celtics would have to include All-Star forward Jaylen Brown, an ascending talent who is in the midst of another career season, averaging 25.6 points, 6.1 rebounds and 2.5 assists,” Charania wrote.

Brown’s name has frequently come up as a sticking point in trade talks involving the Celtics, with teams potentially seeing him as a more attainable target than Tatum.

While Tatum is the better overall scorer, Brown has been the better player so far this season for the Celtics and continues to emerge as an All-Star-caliber player for Boston.

But as good as both Brown and Tatum are, the Celtics haven’t benefited much from their talents as a team, stumbling out of the gate to a 4-6 record.

Though Boston’s president of basketball operations Brad Stevens hasn’t committed to making any dramatic move based on 10 games, he has suggested he’ll closely monitor whether changes need to be made as the season progresses.

Bringing Simmons would certainly be a significant shift.

For one thing, he would offer an elite play-making option at point guard to run the offense through, which the team doesn’t currently have in Marcus Smart or Dennis Schroeder. He’s also a stalwart defender capable of guarding almost every position on the floor.

Of course, Simmons also doesn’t offer much in the way of spacing or perimeter scoring, taking the term “pass-first point guard” quite literally. Then, there’s the matter of how his attitude would mesh with the Celtics and how he’d play under Ime Udoka, who coached him in Philadelphia two seasons ago.

Plus, there’s the idea of giving away a player in Brown that is continuously working his way up the ladder of the NBA’s top players at just 25 years old.

For now, there’s nothing but chatter on this subject. But if the Celtics can’t get things turned around, that noise might start to pick up soon. 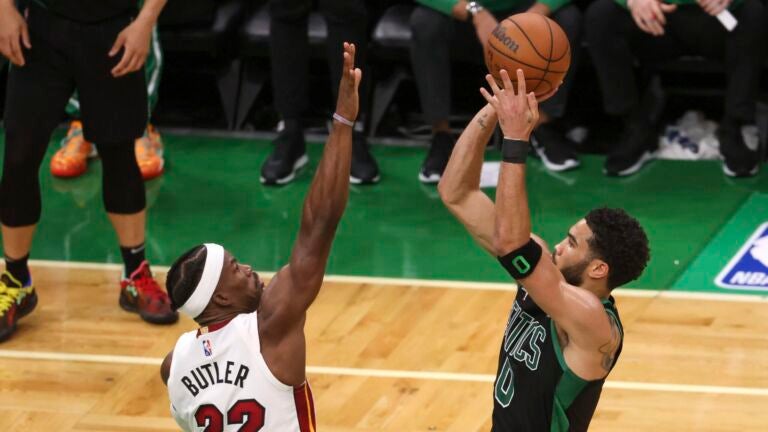 What oddsmakers are projecting for Celtics-Heat Game 7