There are perhaps an equal number of reasons to believe they are doomed to a first-round exit or an ignominious appearance in the play-in game once again. The Celtics are often a Rorschach test, and this year is no exception.

First consider the positives. The defense showed in consecutive games — including one against the vaunted Heat — that it can not only be good, but elite. Jaylen Brown appears to have taken another step toward superstardom. Jayson Tatum looked like himself twice in seven games (the Celtics are 1-1 in those games) and has plenty of room to improve. Dennis Schröder offers a dynamic, defense-collapsing presence at lead guard the Celtics have missed since Terry Rozier left. Marcus Smart remains himself — an A+ defender and perhaps the best passer on the team who contributed twice to the early-season drama. Robert Williams stuffs the box score. Al Horford turned back the clock during his sabbatical year with the Thunder. Romeo Langford is shooting 46.7 percent from 3-point range on 2.5 attempts per game.

And yet, the Celtics are 4-6 — once again something less than the sum of their parts. That’s the push and pull of the last few years with this team: They always feel like they can take another step because they leave so many steps untaken.

So to review, let’s take a look at everything we really know about the Celtics.

– They will go as far as Jayson Tatum and Jaylen Brown take them.

And that’s about it.

Brown has been excellent: 25.6 points, 6.1 rebounds, 39.7 percent shooting from 3-point range, 5.1 free-throw attempts at a 78-percent clip. The Celtics have outscored opponents by 16.2 points per 100 possessions when he is on the floor, per Cleaning the Glass.

More importantly, Tatum’s positive impact during his cold shooting stretch raises the question of how good the Celtics will be when teams panic over his production and he produces anyway. On Saturday, he poured in 32 points against the Mavericks even though the Mavericks spent much of the game doubling him. Tatum beat the double teams by attacking and passing out of them effectively, and as a result, he was +5 in a game the Celtics lost by three (without Brown).

The list of what we don’t know is much longer.

– Is everything okay with Marcus Smart? He offered oddly cryptic comments about his contract negotiations at Media Day and called out his star teammates after a tough loss. Tatum and Brown offered their thoughts on the matter, and neither seemed particularly appreciative. The Tatum-Brown-Smart dynamic feels tenuous, and Tatum and Brown seem determined to let everyone know they are cool with each other.

– How long will it take Tatum to break out of this slump? The Celtics are 4-6, so with Brown out for 1-2 weeks, superstar Tatum is badly needed. Saturday’s game felt like a nice first step until the closing seconds.

– Is this reinvigorated version of Horford going to hold up all year? He seems to think so: “Yeah, I’m 35, but I feel as long as I’m putting in the work … I’m doing everything that I need to do, and I feel like I can keep playing at a high level.”

– What role should Dennis Schröder play? Is his current super-sub iteration ideal, or has he shown enough to make a case for starting point-guard minutes? How will Smart take that, if Udoka decides it’s necessary?

– Can Romeo Langford and Aaron Nesmith contribute this year?

Most of those questions are ceiling raisers. A turn-back-the-clock season from Horford isn’t enough to make a bad team good, but it could make a good team very good. Nesmith and Langford are fun, but undeniably a subplot. The Schröder vs. Smart debate will likely rage on Twitter, but either player works great when Tatum and/or Brown is demolishing an opposing defense.

In other words, establishing the “good” baseline is the task charged to Brown and Tatum.

So again: How good are the Celtics?

The Celtics are annually fascinating because they show flashes of a contender while threatening to miss the playoffs entirely. Tatum and Brown are great players, but do they raise the floor enough? Can everyone keep their tempers together? Why does this year feel like a continuation of last year? Can first-year coach Ime Udoka get the best out of a group in ways veteran coach Brad Stevens couldn’t?

Meanwhile, on the positive side of the spectrum, the Celtics can accurately say they are a few odd plays away from being well over .500. They were one of the worst teams in the league defensively over the first seven games until they traveled to Orlando. Now they are 11th, allowing just 105.4 points per 100 possessions. Something feels like it is starting to click.

Small sample sizes can’t be trusted. The Celtics could simply be a mediocre team fluctuating around the mean — good roughly half the time, bad the other half — but they also could be a good team that started slow and is now turning a corner.

The deeper we dive into a season, the more a team’s Rorschach test begins to clarify. For now, as they were before the season, the Celtics are still just reflective of how you want to look at them. 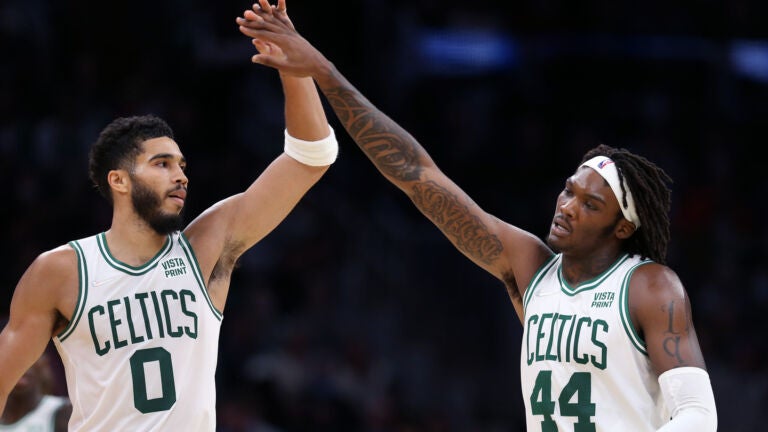