Here are the takeaways as the Celtics pulled away from the Lakers in the second half on Friday, claiming a 130-108 victory over LeBron James in his return to action.

1. Jayson Tatum has had several memorable moments against the Lakers — his favorite team as a child — but few were as well-timed as Friday’s outpouring. By the time he checked out late in the fourth quarter along with most of the rest of the Celtics’ rotation players, he compiled 37 points on 13-for-26 shooting — including 4-for-9 from three — to go with 11 rebounds and a pair of assists. The assists don’t tell the whole story — Tatum got the ball moving when the Lakers doubled him, and on more than one occasion, he found a teammate who was then sent to the line.

“We liked some of the matchups he had, he could use his size,” Ime Udoka said. “But he took advantage of his height in isolations, post-ups, pick-and-rolls. So when he’s extra aggressive like that, he gets downhill, there’s a crowd that he draws. …

“He was extra aggressive. I liked his physicality inside ducking in and hitting guys with the shoulder. So that’s what we’re looking for every night.”

The “Is Tatum back?” guessing game probably needs to stop (for his part, Tatum said he was “never worried” that his shot would return), so we won’t engage here, but what we will say is that Tatum was sustainably excellent. He scored efficiently and repeatably, varied his looks, and found teammates when the defense collapsed to him.

“I put too much work in to ever worry or doubt,” Tatum said. “It was just a matter of time. Hopefully, I can keep it up.”

2. Marcus Smart — who has been really good over the last few weeks — dished out six assists to go with an efficient 22 points. He also helped keep the Celtics alive early when the Lakers threatened to pull away with a dominant first quarter.

It’s unclear exactly how much Smart’s comments two weeks ago regarding Tatum and Jaylen Brown’s passing helped or hurt, or even whether Tatum and Brown passed more afterward. Still, Smart has held up his end of the bargain.

3. Smart was asked if he expected the first few weeks of the season to be this up-and-down for the Celtics. He said he did.

“I think we’ve been reacting really well,” Smart said. “I think we had some turmoil early on, that’s part of it, just trying to figure out a way to get each other going. And we’re doing it, it’s coming along. Obviously, we still have a lot of work to do, but we’re on the right path.”

Smart is right, although he leaves unexamined how much of the early-season turmoil was his doing. Still, the Celtics — and Smart — do look a lot better now.

4. The Lakers scored 38 points in the first quarter — a concerning total for the Celtics’ improved defense. They then managed just 23, 21, and 26 in the quarters that followed. The Celtics might have very little to complain about when they watch the film on Saturday.

5. The Celtics outscored the Lakers 56-36 in the paint. Anthony Davis dominated around the rim in the first quarter, attacking both with and without the ball, but the Celtics got into the teeth of the defense the rest of the way.

“My mindset was I didn’t want us to go into our old habits of just settling, trying to get it back in one possession,” Smart said. “Just trying to attack the rim, find the right plays for myself and for other guys. That’s what we’ve been missing a lot over the years is when we get down like that against a good team, we tend to relax and kind of go the easy route of trying to shoot our way out of it.”

6. LeBron James said Enes Kanter didn’t speak to him following the game after the Celtics’ big man accused him of kowtowing to Nike and China in a tweet on Thursday.

Per James, he and Kanter crossed paths in the hallway and Kanter said nothing.

7. Al Horford was excellent defensively against Davis, and he poured in 18 points along with a variety of other contributions that drew some of the most unequivocal praise of the season from Udoka.

“He has fingerprints all over every game, pretty much,” Udoka said. ” He does so many things for the group. Obviously, his versatility, defensively and offensively, is different from the rest of our bigs as far as his passing, his shooting, and he can post up at times and stretch the floor.

“He does everything every night, he’s been great for us all year and he’s been a steady presence with guys in and out of the lineup and he brought some of the same tonight.”

8. The NBA continued celebrating its 75-year history during Saturday’s matchup, and both Bill Russell and Paul Pierce were on the sidelines to the delight of the crowd.

Tatum — who noted he learned a lot from watching Pierce’s footwork — was asked about playing in front of Celtics legends.

“It’s a surreal moment,” Tatum said. “Obviously, Bill Russell, I know the impact that he had on the Celtics and the NBA. I didn’t get to see him play, but having somebody like Paul come to the game, it’s someone I have a relationship with, I mean, I remember watching him play and now he’s watching me play. That’s crazy to me.”

9. And finally after dropping 23 points on Friday, LeBron James scored 20 points against the Celtics 50 times in his career per the ESPN broadcast. That isn’t particularly surprising given James’ caliber, but it does show how long he has been a star.

The Celtics play the Thunder on Saturday at 7:30 p.m. 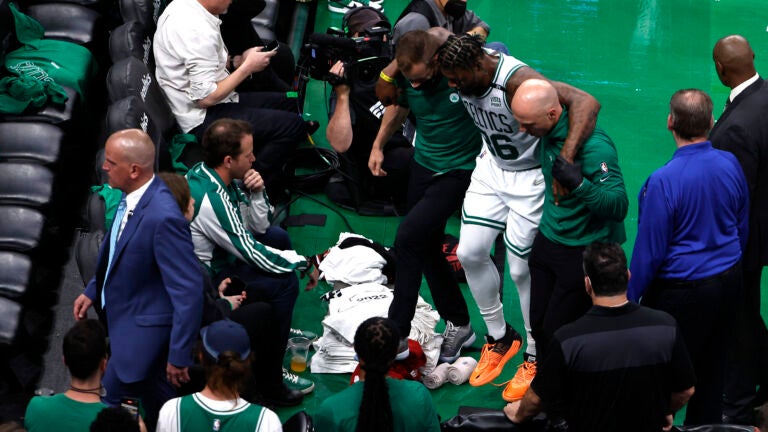