On Sunday, multiple Celtics players — including Jaylen Brown — took part in a memorial for late Boston native Terrence Clarke, who died tragically in a car accident.

Clarke — an NBA prospect who played for the University of Kentucky before his death in April — was honored at the Vine Street Community Center, where he grew up honing his skills. The community center put a blue heart at center court with the words “TC 5” on the floor.

On Monday, following the Celtics’ win over the Rockets, Brown was asked about the opportunity to participate in Clarke’s memorial.

“It meant the world to me,” Brown said. “Obviously a lot of emotions for everybody. Some of the things that you might have been distracted by and then being able to celebrate him brings all those emotions back to the front. He’s not around, he’s not here, and things like that.

“It isn’t fair. That’s what sucks about it. … We have a saying that we say in our family that energy lasts forever. We truly believe that if we keep speaking his name and remembering him, that energy is still gonna be around. So Terrence is no longer here with us today but as long as I’m here a piece of him lives with me and a piece of him lives in all of us. So I’m gonna continue to celebrate him and his family for giving us Terrence, because he was a great kid, man, he really was.”

The Boston basketball community was devastated by Clarke’s death. A top prospect entering college, he signed with Klutch Sports after a year at Kentucky and was training in Los Angeles when — after a workout on April 22 — he collided with another car making a left turn. Clarke was pronounced dead after he was transported to a hospital.

“His mom and my mom are really good friends,” Brown said. “They hang out, they come to my mom’s house a lot. His little brother Gavin, we like hanging out together. So, we’ll definitely be around.” 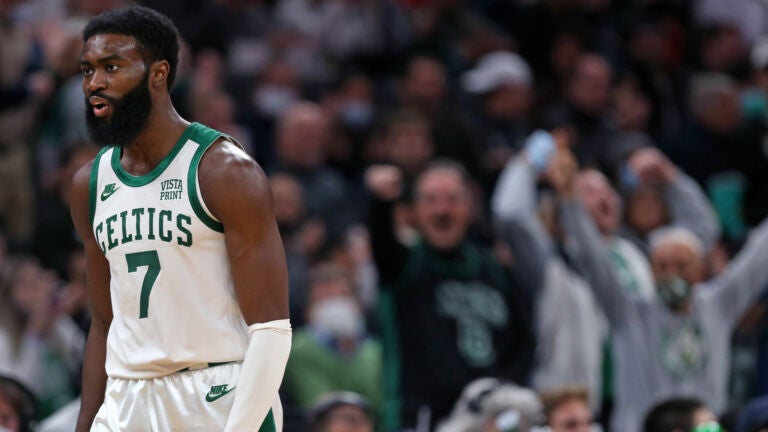 Celtics' Jaylen Brown will be questionable for the next week