Here are the takeaways as the Celtics started their road trip with a hard-fought 137-130 loss to the scorching hot Jazz.

1. The Jazz shot 52.9 percent from 3-point range on 51 attempts with 27 makes, the most 3-pointers made by an opponent in Celtics team history. They outscored the Celtics in a game in which the Celtics generated 130 points. Throw up your hands, right?

Ime Udoka wasn’t quite ready to let his team off the hook that easily on Friday.

“Not in the first quarter,” Udoka said, when asked if the defense was good despite the makes. “… We weren’t switching up aggressive. To withstand the 38-point first quarter and get back in the game, credit to our guys to keep playing, but I think we helped them get into a rhythm early in the game.”

The Jazz were an eye-popping 9-for-13 from 3-point range in the first quarter, as triples accounted for 27 of their 38 points, and a quick look at the film shows Udoka has a point. Donovan Mitchell started hot, burying a deep 3-pointer on the first possession despite excellent Celtics defense. Then a series of miscues gifted Mitchell and Mike Conley a steep downhill of momentum, as the Celtics looked uncertain whether to switch or go over screens.

That haunted the Celtics in the fourth when the defense tightened up but the Jazz kept hitting 3-pointers.

Al Hoford got cooked on one of Conley’s first-quarter makes.

“I definitely feel there were some really, really tough ones,” Horford said. “We were there, we contested them. And you’ve got to shake their hand and give them credit. We’ve been playing really good defensively, and they were just hitting.”

2. After the first quarter, the Celtics seemed to figure out Rudy Gobert, who is simultaneously one of the NBA’s best defensive centers and crucial to the Jazz’s success and also the first player teams attack to space out the floor. Horford’s gravity pulled Gobert away from the rim, and the Celtics scored 105 points in the second, third, and fourth quarters combined.

Horford — who finished with 21 points on 8-for-15 shooting as well as six rebounds and nine assists — called the performance the Celtics’ “best offensive performance of the year.”

“It’s tough,” he said. “No question about it, it’s tough. But I feel like we gave ourselves a chance to win the game there. … We got into them defensively and I think that helped us. But yeah, they just kind of outpaced us.”

3. Jayson Tatum got himself going in the first half with several nifty finishes. On his first, Jordan Clarkson got stuck on Tatum in the post and slapped at his side to try to dislodge the ball, but Tatum timed a spin perfectly and scored a layup. On the next, he snaked a pick-and-roll and used the rim to keep Gobert from swatting away a left-handed layup. That started a series of impressive moves as Tatum dropped 37 points on 25 shots, which included an 11-for-11 performance at the free-throw line.

“I wasn’t hitting threes tonight, so still trying to find a way to score,” Tatum said. “We started coming back and playing with some pace, so I was just getting downhill.”

To Tatum’s point: The 37-point outburst bandaged over his 2-for-11 line from 3-point range. In his last 11 games, Tatum is now shooting 28.7 percent from behind the arc and 21.6 percent in his last six.

Tatum was asked why the Celtics are so comfortable shooting from mid-range, particularly in contrast with the Jazz. No team takes more 3-pointers than the Jazz, while the Celtics are just 16th in attempts.

“I think you got guys that work on that and feel comfortable, and that’s part of their game,” Tatum said. “I think that’s the simple answer. It’s just certain teams play based on their personnel. Honestly, I just think that’s just how each team is different.”

4. Prior to Friday’s game, Jaylen Brown was ruled out due to “Return from Injury Management.” Brown looked visibly pained after Wednesday’s win over the Sixers, which raised questions about his hamstring.

Udoka was asked if the Celtics brought Brown back too soon. He said Brown went through all of the “rehab and buildup” necessary and reminded reporters Brown wanted to return against the Hawks and the Lakers two weeks ago.

“There was going to some natural soreness if you haven’t played for weeks or games, and it’s hard to emulate a real-time NBA game in workout and rehab,” Udoka said. “So as long as he felt good the next day, some soreness is natural. Tightness is going to be natural at times. And if you feel a little bit more after the game, that’s when we’ll start to take a deeper look at it, and that’s what we did after the last game.”

5. Robert Williams spent much of the game on the bench as Horford and shooters spaced out Utah’s defense, but when he came into the game to spell Horford with Gobert on the bench, he was solid — eight points and five rebounds in 15 minutes. The Celtics used his off-ball movement to exploit Hassan Whiteside in the fourth quarter, taking a four-point lead as Gobert rested for the stretch run.

“Forced their hand a little bit,” Udoka said. “Gobert was controlling the paint there, we wanted to put him against some guys who could space the floor a little bit better.”

6. Dennis Schröder was a mixed bag — he brought some offense to the table in the fourth, but the Jazz took advantage of him defensively on several possessions. Schröder stumbled around a pick-and-roll, which resulted in a Rudy Gobert alley-oop. Then Mitchell buried a three directly over his head, and burned him backdoor for a layup.

The Jazz still needed several huge shots from Conley and Mitchell to close out the Celtics, but those defensive sequences didn’t help.

“Marcus and Dennis were out there really controlling things offensively,” Udoka said, when asked why Grant Williams was on the bench down the stretch. “Jayson and Josh Richardson were playing well, and they had smaller lineups on the court, so we could have gone bigger or smaller with Grant, but J-Rich was playing well. Just went with the hot hand — who was playing well.”

Schröder finished with 26 points on 10-for-21 shooting.

7. To paraphrase Doc Rivers’ go-to phrase — that the NBA is a “make-or-miss league” — it’s also a win-or-lose league. The Celtics spent most of Friday in pursuit of their best win of the season but came up short down the stretch in a game that clearly meant something to both teams. Now, instead of entering Saturday’s back-to-back against the Blazers as winners of five of their last eight, the Celtics need a victory to avoid falling back to .500.

They also need to beat the Blazers to give themselves a little breathing room. After Saturday’s game, they have two days off before perhaps the toughest stretch of the season: Three games in four nights against the Clippers, Lakers, and Suns. Saturday might decide whether Friday’s loss was nobly hard-fought or the start of a long, arduous stretch of road games.

The Celtics and Blazers tip off at 10 p.m., for those hardy enough to stay up. 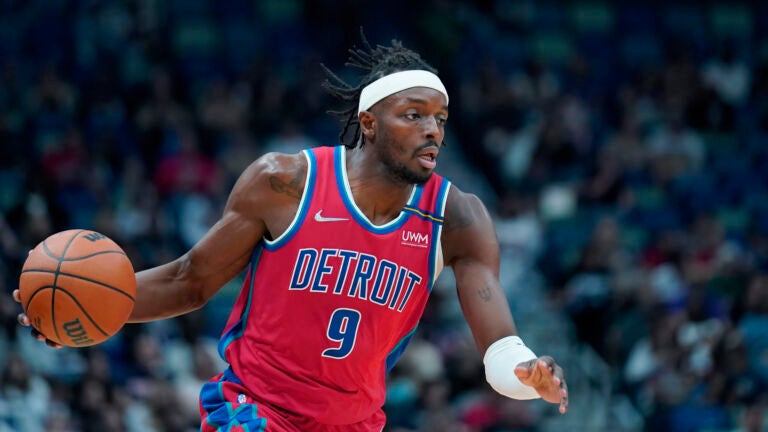