The world has changed many times over since Bill Russell last played or coached basketball for the Boston Celtics, whether you’re talking about the game of professional basketball or the society Russell and many other Civil Rights Movement figures fought so hard to improve.

One thing remains the same, though: Russell is still one of the most decorated and respected athletes in American sports history. This week, he’ll be sharing some of his incomparable trove of treasures with fans.

Russell plans to sell off “a large portion” of his collection, including game-worn jerseys, championship rings, and items commemorating his activism for civil rights, at T.D. Garden on Friday. The event will be conducted by Hunt Auctions, which has handled auctions by legendary sports figures like Babe Ruth, Ted Williams, and Roberto Clemente.

Boston.com spoke with David Hunt, President of Hunt Auctions, about the sale, what it was like to work with Russell’s collection, and how those items tell the Celtics great’s story.

When did Russell approach you about doing his auction with your company?

So usually when the process begins, as it did with Bill, this is a number of years ago. Let’s identify what you have, let’s make sure to educate Bill and his family on how best to preserve the items…and have discussions of what’s best to do with them.

I’ve found in the dozens of athletes we’ve worked with…these items and awards and basketballs, and uniforms, they’re deeply appreciated by the players that receive them, but they were part of their job. If you’re a writer and your computer and your tablets are your implements, they may or may not mean anything to you. But the interviews gave, the memories you have from those interviews you conducted are probably more cherished. So, his experiences on and off the court and the just amazing things he’s experienced in this life are what are most cherished to him. And if this gives some joy to his fans to share some of these pieces with them, to do some good for his MENTOR charity and the Celtics United for Social Justice charity, what a great way to do it.

You’ve worked with plenty of other big-name athletes, but this time it’s Bill Russell, one of the most influential, winningest athletes of all time. What goes through your mind when somebody else like that wants to work with you?

It’s something that I’ve always really been focused on not ever taking for granted. We’ve worked with Roberto Clemente’s family, Johnny Bench, Babe Ruth’s family, Ted Williams, you know, some really big names. But I don’t need at all to explain what Bill Russell means to the game of basketball, American popular culture, the Civil Rights Movement. He’s done a fine job of that himself in his life. When you when you’re contacted to do something like that, even if there’ll never be any revenue or financial gain for us to come out of it, it’s an honor. It’s humbling.

What were the conversations like regarding some of the more personal items, like his Presidential Medal of Freedom, and whether or not they would make it to auction?

In anybody’s case, not just Bill Russell’s, we have things that maybe our son or our daughter made for us that we wouldn’t sell for a million dollars. But we might have some piece of jewelry that was handed down from a relative that just doesn’t bear any significance to us sentimentally if that makes sense.

What I always advise our clients is, when you’re making decisions of what to retain, value is one thing. But sentimental value and importance to them as a person, I think those are the things to focus on. For example, he retained a photograph of himself and President Obama that was signed from President Obama to Bill. It’s a significant moment. For what Bill worked for in his life and to see that accomplishment by President Obama and what that meant to him was incredibly important. So that’s not about what that photo is worth or not.

It’s also not just about offering it from a value standpoint. It truly is about sharing it. It is about other eyes and other young people seeing that scrapbook page with a letter from Jackie Robinson [addressed to Russell and his Celtics teammates who boycotted a game in Lexington, Kentucky over segregation]. That had never been out there before to my knowledge. Now, the notoriety, the news coverage that it’s getting, other entities reading about it, institutions perhaps ending up with an item like that where millions of people can see it not just a scrapbook tucked away in somebody’s home…There’s nothing wrong with either path, and I think that’s what’s important.

It’s tough to say. Maybe the final jersey he wore in the 1969 NBA Finals against the Lakers. You can sort of take yourself right back to that moment, which is what drives a lot of parts in our market. He wins his 11th championship in 13 years and walks off the court. There’s an image of him sitting in the locker room with Red Auerbach, cigar in Red’s mouth, and he’s wearing this jersey. It’s tough to beat that one. It’s already at $400,000 in the bidding. So it would not shock me if that ends up being the most sought-after piece. Of course, his U.S. Olympic gold medal, that is certainly something of great significance that would be sought after and is certainly a very unique piece.

But it’s always interesting, these bigger auctions of a player on Bill’s level, there’s almost always is a dark horse where sort of nobody saw it coming. The estimate might be “x” amount, and it brings ten times that just because it just struck a chord and resonated with bidders. We’re always interested to see which one that dark horse is going to be. And I don’t know in this one: there’s so many to choose from in this particular collection.

As we talked about already, there’s a lot of non-basketball stuff here. Why do you think it was so important to Bill share that side of himself as well: The Civil Rights hero, the man Bill Russell?

Again, not speaking for Bill, but in my opinion, I think it’s really important. In today’s world with athletes and others speaking out against different things, Bill did that before Twitter, before cellphones. He was doing it when the eyeballs of the country were on him in a very, very, very volatile time. So I think it’s really important to consider these pieces and think, try to transport yourself back to that time. You have to think about what that was like back then for an African American man of his stature to come out against certain things and not worry about the consequence to him or his career, but doing what was right in his opinion and what was right for others that are going to follow him. That’s rare. That’s what makes him what he was off the court.

So I mean, items that relate to some of those points, there’s a lot of them. It’s not just one. The scrapbook pages from the Lexington boycott game in 1961. And not just the Jackie Robinson scrapbook page, there’s another one in there. The Ali Summit Bill was famously at. It’s a signed photograph. Just the image itself is interesting and important. You can tell what it meant to other people, what it meant to other African Americans, other African-American players to see…this is Bill Russell taking this stand for all of us. 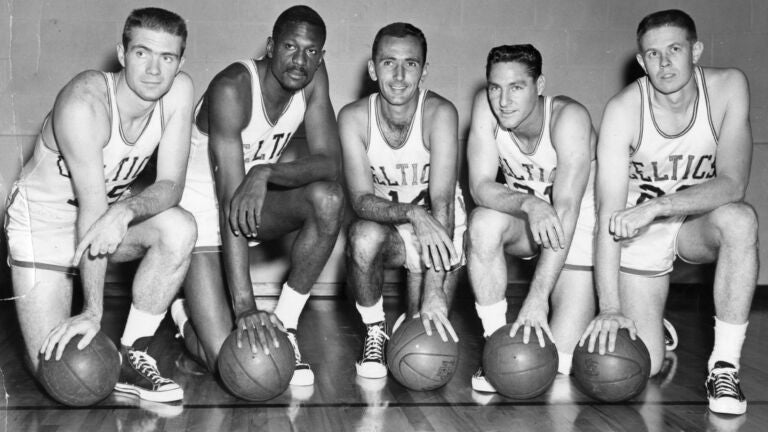