For the fifth time this season, Celtics forward Jayson Tatum did not make a 3-pointer in Wednesday’s loss to the Hornets.

The Celtics fell 111-102, as Terry Rozier (28 points, 18 field goal attempts) Miles Bridges (22 points, one rub-their-nose-in-it windmill dunk) and LaMelo Ball (18 points, 10 assists) thoroughly outplayed them in the second and third quarters and hung on the rest of the way. The Celtics had multiple opportunities to rally once again, but they couldn’t quite climb over the hump against a good team.

Tatum is shooting a career-low 31.7 percent from deep after Wednesday’s game. Something is off, and whatever it is has cost the Celtics significantly.

“He was 0-for-7 from three and probably five, six of them were wide open,” Ime Udoka said after the game. “So he’s not going pass those up regardless of if the ball is going in or not.”

Jaylen Brown — who struggled as well, finishing 2-for-11 from three — noted that getting to the rim isn’t as easy as many suggest.

“It’s the NBA, it doesn’t really work like that,” Brown said. “You have 7-footers down there. You’ve got to make the right play.

“At times we tried to be overly aggressive and get to the basket anyway, but sometimes that leads to turnovers and even worse basketball, so we have to keep taking the open shots.”

Udoka is right that Tatum won’t (and shouldn’t) stop taking 3-pointers, if only because the Celtics’ season may succeed or fail based largely on whether they go in. Any concerns, however, were justified long ago.

2. Even with Tatum’s struggles, Wednesday’s game probably wasn’t a panic-button moment. The Celtics were without Robert Williams and Marcus Smart, and they won seven of 10 and five out of six prior to Wednesday’s loss.

Still, those five games included the Pelicans, the Pacers twice, the Knicks in a home-and-home split, and the incredibly banged-up Bulls. Wednesday’s game was a chance to get a big win against a tough opponent, and the Hornets simply looked like a better, deeper, and more cohesive team.

3. Terry Rozier could barely contain his excitement about beating the Celtics — so much so, that Hornets coach James Borrego called timeout to yell at Rozier for chest-bumping Miles Bridges after his windmill dunk in the fourth quarter.

Rozier also buried the dagger — a filthy side-step 3-pointer that cut off the Celtics as they made a final push.

“Man, it’s good,” Rozier said after the game. “To beat a team like Boston, I’m pretty sure I can speak for a lot of people, it feels good. It’s a winning program, a team with a lot of great players, plays hard to the end, so to come in here and get a win, and like I said earlier we want to make a statement because we want to get to where they’re at as an organization. So it feels good to get a win.”

With the caveat that Rozier was visibly unhappy and ready to leave after the 2018-19 season, it’s hard not to wonder what might have happened if the Celtics had simply re-signed him instead of trading for Kemba Walker. The 2017-18 reunion tour that started when Brad Stevens traded Walker for Al Horford is missing a key band member.

“He was having way too much fun out there,” Jaylen Brown said. “I didn’t say nothing to him after the game because we lost, but Terry’s a good player. That’s my guy.”

4. With 8:40 remaining in the fourth quarter, Romeo Langford drew a foul that put the Celtics in the bonus.

The Celtics shot precisely zero free throws the rest of the way.

Udoka pointed to the fact that both Tatum and Grant Williams spent much of the game in foul trouble.

“They got a little hesitant there and not as aggressive moving downhill,” Udoka said. “That hurt us, and we knew we were in the bonus and talked about attacking and getting to the basket a little bit more. I think we drove it in and got a little sloppy, some turnovers in transition and playing in a crowd. We didn’t take advantage of that fourth quarter, being in that early obviously.”

5. To break up all the negativity above: Langford was solid, and Dennis Schröder was excellent once again in a starting role.

Langford finished with 11 points operating off the right side of the floor, where he has looked most comfortable for much of the season.

Udoka is in a tough spot with Schröder: He’s too good at starting to come off the bench, but he’s been brutally bad with certain starting lineups (replacing Brown with Schröder when necessary due to injury turns the Celtics’ starting lineup into one of the NBA’s worst).

“I think everybody knows that I’m a starter but I mean right here, right now, what we need, whatever coach needs me to do, I’ll do it,” Schröder said at media day.

You can’t say he didn’t warn everyone.

6. Gordon Hayward returned to TD Garden for the first time since he left as a free agent following the 2019-20 season. His introduction was met with mostly applause, which seems appropriate for a player whose catastrophic injury — through absolutely no fault of his own — shattered an incredibly positive Celtics timeline. Hayward struggled through the 2018-19 season in his return, finally found some rhythm the next season, and then suffered another brutal ankle sprain during the playoffs. He returned — visibly too early — as the Celtics floundered in the Eastern Conference Finals against the Heat.

Hayward and the Celtics always seemed like a pairing that really wanted to work but simply didn’t.

“I think I’ll choose to remember all the good moments that we had together,” Hayward told Sports Illustrated this week, describing what it was like to play for Brad Stevens.

Presumably — and deeply unfortunately — most of those good moments happened at Butler.

Hayward finished with five points on 2-for-4 shooting, well below his season average of 17.3 points per game. 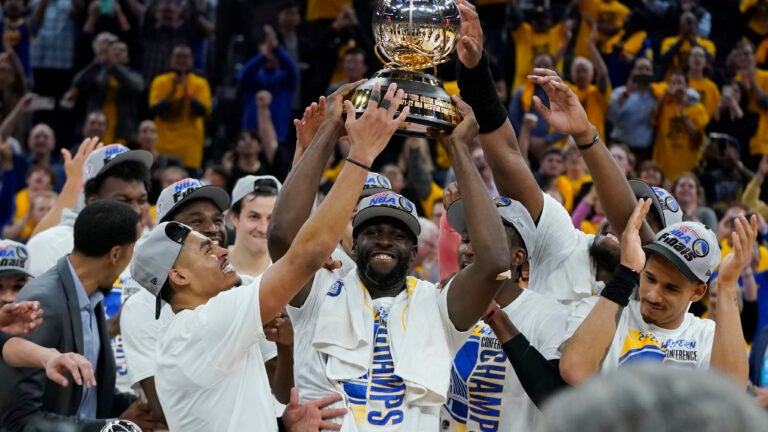