The thing about scoring 51 points in an NBA game — as Jayson Tatum did against the Wizards in the Celtics‘ 116-87 victory on Sunday — is that one good half isn’t enough. Three quarters, frankly, isn’t enough. To score 51, you need to be great for an entire game.

For the Celtics this season, being great for an entire game has been a real issue. The Celtics struggle to hold leads and finish games, and the missing piece often seems to be reliable buckets from a superstar.

On Sunday, Tatum was the superstar. He started immediately, snapping a streak of 20-straight missed 3-pointers with a triple just over a minute into the game. He then powered his way to hoop against Wizards center Daniel Gafford for a layup, going shoulder-to-shoulder with the big man. He powered through Gafford again for another layup, then swished a step-back 3-pointer.

The gates were open. Tatum dropped 31 points in the first half, but he kept stoking the flames and finished 18-for-28 from the floor and 9-for-14 from deep — adding 20 in the second half, including 17 in the third quarter. He also grabbed 10 rebounds and dished out seven assists.

He was what the Celtics needed: A superstar, this time for an entire game. In the past, Tatum’s hot streaks are virtually unmatched. The Celtics could really use one.

More takeaways from the Celtics win

2. Marcus Smart returned from his health-and-safety absence with a nice evening: 11 points, four rebounds and six assists. His detractors hate his shot selection, but the Celtics outscore opponents by 3.9 points per 100 possessions when he’s on the floor (and they are 20-18 in games he plays).

After the game, Smart told reporters he pulled everyone aside to tell them all he loved them, that he was proud of them, and that he wanted to see them all succeed.

“I know obviously things haven’t been going our way, but we just have to go out there and do what we know we ought to do,” Smart said. “I pulled Jayson, Jaylen told them separately by themselves, and I went down the line with everybody individually and told them I appreciate them, I’m proud of them.

“‘This is what you do. Just go out there and do it and keep doing it.'”

Smart’s name has been notably absent from the Celtics’ rumored untouchable list as the trade deadline approaches. The next few weeks will show whether his speech to teammates was a nice gesture from a respected returning to the lineup after missing several games or a punctuation mark on his Celtics career.

When Tatum is at the peak of his powers, that’s what he does for a team: He can turn a poor shooting night into a blowout win almost singlehandedly. When the Celtics talk about building around him, those types of performances on a more consistent basis are what they hope to see.

And when Brad Stevens and team decision-makers leak that neither Tatum nor Jaylen Brown (who had a substandard 18-point afternoon on Sunday) are available in trade dicussions, here’s the thought process summed up in a tweet.

4. After a four-game stretch last week in which he shot 40 percent from 3-point range, Al Horford has slipped back down to his season average from deep — now 1-for-7 in his last two games and 26.8 percent for the month of January. It’s hard to complain too much — he was +9 on Sunday, and the starting unit with Horford continues to truck opponents by nearly 17 points per 100 possessions — but opposing teams don’t exactly prioritize him as a shooting threat.

That’s troublesome for the Celtics as they try to score around the basket. Horford’s primary offensive purpose is to pick-and-pop, but if opposing bigs can simply cut drivers off without having to worry about Horford shooting high-efficiency shots, defending the Celtics is a lot easier.

“He told me that my shot was going to fall today, but he was like, I’m close to breaking his record,” Tatum said.

Williams — who is shooting 42.4 percent from deep this season — famously missed 26 straight 3-pointers to start his NBA career. By hitting nine on Sunday, Tatum avoided a piece of trivia history he had no interest in achieving.

The Celtics take on the Kings on Tuesday. 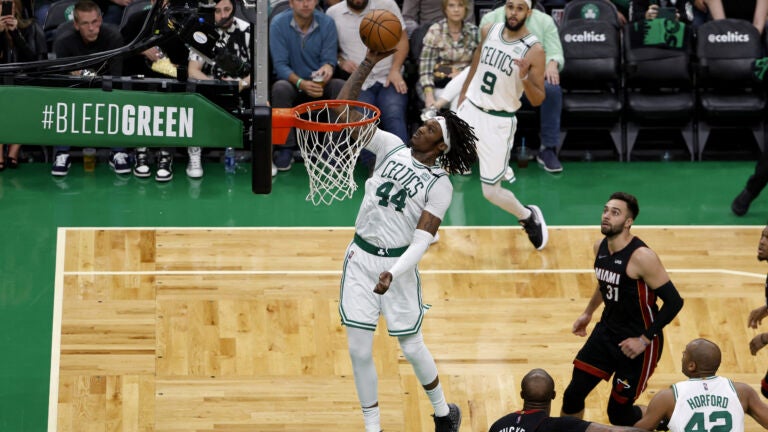