Celtics forward Jayson Tatum was not one of the three front-court players chosen to start the 2022 All-Star Game, but he likely will still be an alternate starter due to Kevin Durant’s MCL injury.

Per Yahoo! Sports’ Chris Haynes, Durant is expected to miss the game after sustaining an injury on Jan. 15. Durant was the top Eastern Conference vote-getter, followed by Giannis Antetokounmpo and Joel Embiid.

All-Star starters are determined by a weighted score between player, fan and media panel votes. Durant was No. 1 in all three categories, while Antetokounpo and Embiid were second and third in player and fan rank (Embiid, Durant and Antetokounmpo appear to be unanimous among media members).

Tatum finished fourth in both fan and media rank but was sixth among players. Hornets forward Miles Bridges finished tied for fourth with Tatum in media rank, and players voted him above Tatum as well, but fans voted him ninth.

With Durant out, his starting spot goes to the next-highest weighted score. Assuming Tatum is selected to the All-Star game by coaches as a reserve, he will be a starter for the first time.

Tatum certainly should not have been voted in as a starter over Durant, Antetokounmpo or Embiid, but an easy case can be made for his candidacy behind them. Tatum is eighth in points per game at 26.0 and second in total points at 1,172 — a nod to both his production and his consistency. He’s also averaging 8.5 rebounds and 3.9 assists. With Tatum on the floor, the Celtics outscore opponents by 9.0 points per 100 possessions.

Jaylen Brown, meanwhile, was 10th among all vote-getters. Brown was 11th among players, 10th among fans and ninth among media members. The back-court starters are DeMar DeRozan and Trae Young.

If Tatum makes the All-Star team, it will be his third appearance. Brown has made it once. 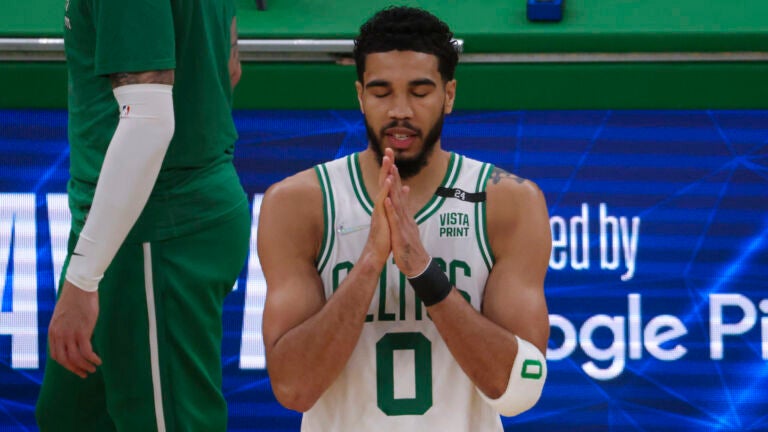