Former Celtics big man Tacko Fall sat courtside at Game 5 between the Celtics and Bucks in the Eastern Conference semifinals on Wednesday.

Fall, a favorite among teammates and fans during his time with the franchise, chatted with Brad Stevens, Jayson Tatum and other former teammates before the game, but after all of the fans took their seats and the TNT broadcast pointed out Fall’s presence, many people on social media were quick to note how unfortunate the seating chart might be for anyone behind Fall next to the basket. Fall sat next to the exit row — crucial for someone with legs as long as his — but he could only slouch so much with his 7-foot-5 frame.

Seats that low — particularly in the playoffs — often cost thousands of dollars. Fortunately, Fall and the Celtics found a way to make sure the woman right behind him could see the action.

This, of course, leads one to wonder how the person sitting behind the woman AND Fall might feel, but presumably TD Garden only has so many large cushions.

Fall played 26 games for the Celtics in two seasons on a two-way contract. He signed a two-way deal with the Cavaliers last year and appeared in 11 games.

The Celtics held a narrow lead over the Bucks in the third quarter. 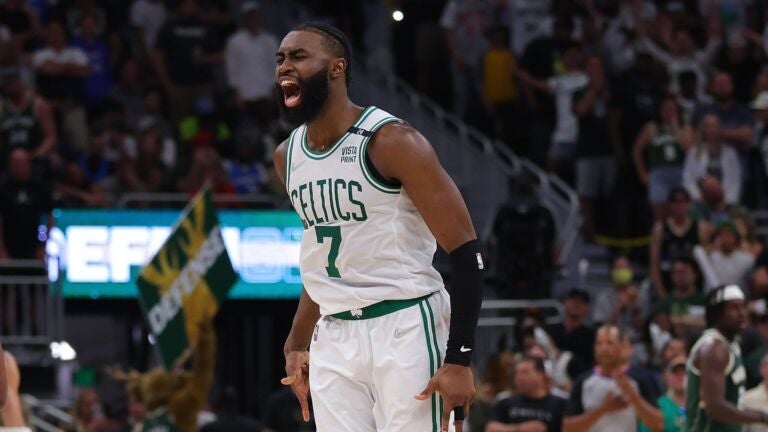