The Warriors came out to play again in the third quarter of the NBA Finals. In Game 2 though, they performed even better, making sure that a Celtics comeback wasn’t possible.

Golden State turned its two-point halftime lead to a 23-point lead entering the fourth, outscoring Boston 35-14 during the third quarter. There were a pair of things that encapsulated just how bad the quarter was for the Celtics. On offense, they turned the ball over five times, which was one more than the number of shots they made in the quarter (four).

The other thing came at the very end of the third quarter. After the Warriors forced another stop, Jordan Poole got the ball and pulled up from 39 feet to drain a 3-pointer as the quarter expired, putting the Celtics in an 87-64 hole entering the fourth.

The Warriors continued their strong play in the opening minutes of the fourth, going on a quick 6-0 run that caused Celtics coach Ime Udoka to pull his starters for the night. The Warriors remained in control to win 107-88.

Jayson Tatum had a fine night offensively, scoring 28 points while making 6-of-9 3-pointers. But he didn’t have much help. After scoring 26 in Game 1, Al Horford only had two points in Game 2. Marcus Smart scored just two points, too, and had five turnovers. After his 13-point first quarter, Jaylen Brown was just 1-of-11 from the field for the rest of the game.

The Celtics still hold home-court advantage after taking Game 1. They head home for Games 3 and 4, with the first of those two games taking place on Wednesday.

Here’s everything that happened in Game 2.

6:46: The Warriors still have a few key players out on the court, including Draymond Green. The Warriors star forward has a technical already and four in these playoffs as six technicals force a one-game suspension. Grant Williams appears to be baiting Green a bit, which might be the only interesting thing left to watch in this game.

9:24: Derrick White, Payton Pritchard, Aaron Nesmith, Grant Williams, and Daniel Theis are in for the Celtics. Barring a major run, we’ve probably seen the last of their starters until Game 3.

10:45: Brutal start for the Celtics in the fourth. They forced Jordan Poole to miss a 3, but Gary Payton was at the right spot to get the putback. Tatum missed a tough shot driving inside, which led to a Poole pullup shot. Then, Horford slipped and turned the ball over, giving the Warriors an easy two points. They lead 93-64 and now the Celtics wonder if it’s time to wave the white flag.

If the quarter already wasn’t bad enough for Boston, it got much worse in the final minutes.

Daniel Theis was picked on by the Warriors when he entered the game, with him giving up a pair of buckets in pick-in-roll situations. In one offensive possession, he appeared unaware that the shot clock was set to expire after gathering a Derrick White airball.

But the Celtics keep turning the ball over and haven’t found easy chances to score. After the Warriors made their last stop of the quarter, Jordan Poole sank a 3-pointer from near halfcourt.

Unless the Celtics catch fire and the Warriors puke all over themselves, this is set to be a 1-1 series heading to Boston.

2:08: The Warriors are having another strong third quarter. The big difference tonight is that they’re closing this one strong. Golden State is in the midst of an 11-0 run, with Curry draining two straight 3-pointers to extend its lead to 79-62.

5:46: Brown’s shot selection has been really questionable tonight. Since his hot start in the first quarter, he’s just 1-of-11 from the field, shooting unnecessary turnarounds on multiple occasions.

Al Horford missed another point-blank shot and the Warriors call timeout to gather themselves. They lead 68-56.

6:47: Celtics coach Ime Udoka was really upset with the lack of a call on Smart and Curry jostling for position for an inbound play and gets T’d up.

6:55: Curry draws a pair of fouls on the same possession, one on Brown and another on Smart along the sideline. The fouls send the Warriors into the bonus for the rest of the quarter.

7:37: Golden State’s starting to get what it wants on offense. Curry made a stepback 3-pointer, Thompson scored on a fastbreak layup, and Wiggins drew a foul on Robert Williams driving to the basket. Golden State holds a 65-54 lead.

8:14: Al Horford’s had a rough go of it tonight. He posted up Klay Thompson but wasn’t able to get by him. Draymond Green came over for a double, causing Horford to miss wildly. Horford remains scoreless.

9:21: Right after I said each team look sluggish, the Warriors turned it on. Kevon Looney slipped open for a backdoor dunk. Then, they forced a trap along the sideline to get Jaylen Brown to commit a turnover. That led to Klay Thompson getting open on some off-ball action on the wing and finally making a 3.

The Warriors are up 59-52 and Ime Udoka calls for time before the third quarter Warriors make their mark.

9:54: Both teams have been really sloppy to start the half, with each side just scoring a 2-point basket. Robert Williams looks unhealthy and Tatum just grabbed his right shoulder again.

Brown made two of the three free throws to tie the game up at 50. But Wiggins got the offensive board on a deep Curry 3-pointer. Brown missed a pullup and White’s corner heave was wildly off.

We’ve got another compelling second half ahead of us.

0:55: Game 2 is getting heated up. Green fouled Brown on a 3-pointer, knocking both players to the court. Green’s legs landed on Brown’s midsection and upper-body at one point, with Green giving Brown a little nudge at one point. Brown took exception, saying something to Green and standing over him. The two players were quickly separated.

Green already had a technical foul and wasn’t assessed one on the play, which would’ve ejected him. ABC’s announcing crew speculated that Green and Brown would’ve received double technicals if it was either a regular-season game or if Green didn’t have a technical already.

4:52: Golden State just went on a much-needed run. Steph Curry scored five straight points to tie the game up at 40. Then, a pair of stops led to a Gary Payton layup and an Andrew Wiggins 3-pointer, giving the Warriors a 45-40 lead, forcing Ime Udoka to call timeout.

Boston’s had a pair of questionable possessions during Golden State’s 10-0 run. Tatum threw a pass directly to Curry and Smart took a contested baseline jumper early in the shot clock.

7:05: Derrick White ends the Celtics’ scoring slump. He made a tough mid-range pullup shot. On the next possession, Brown found him wide open in the corner for 3. Boston takes a 40-35 lead and Golden State calls timeout.

White scored 20-plus points in two of the last three games entering tonight. If his shot can fall throughout Game 2, Boston will have a much easier time getting what it wants on offense.

11:28: Interesting play in the opening moments of the second quarter. Derrick White made a chase down block on Jordan Poole’s layup. As the Celtics turned in transition, White leaped over Poole, who was laying on the court. Poole reached up for White’s leg, knocking him over. Officials reviewed to see if Poole committed a technical foul, but they determined he was protecting himself on the play.

The stars showed up in the final minutes of the first. Tatum made a pair of 3-pointers to give him 13 points through one. But Steph Curry scored six in a similar span, including a driving floater off the backboard that gave the Warriors the lead right before the quarter ended.

2:22: Jayson Tatum just picked up his second foul, too. He got ambitious trying to steal a pass to Steph Curry on a Warriors fastbreak.

2:47: The Celtics’ offense has gone a bit stagnant in the last few possession. But Tatum finally drove to the rim and got fouled by Payton as result. He’ll have a chance to extend their lead to 24-19 when the game resumes from timeout.

3:37: Grant Williams just picked up his second foul, too.

3:52: The Celtics are up, 22-15. But Jaylen Brown, who already has 13 points, just picked up his second foul when fouling Gary Payton on a shot. The call appeared to be a bit questionable on review. Payton missed both free throws, though.

4:47: The Celtics are getting the full Draymond Green experience tonight. The Warriors’ star forward drew a foul on Grant Willaims during a Golden State Possession. However, he got T’d up after exchanging some words with Williams.

6:47: After going up 13-5, the Celtics missed seven straight field goals. Tatum made a 3-pointer to end that. On the following defensive possession, Draymond Green got an and-1. But Golden State kept the ball following Green’s miss. On the ensuing inbound, Green drew a foul on Tatum after the two fought for position on the in-bounds.

Boston was called for another foul after Steph Curry missed a layup. The foul, however, was called on Brown as he tried to box out Kevon Looney on the missed layup. Boston leads 16-11 with Golden State calling a timeout.

9:36: The Celtics are already off to a 13-5 lead. The only bad thing is that Jayson Tatum started grabbing his right shoulder, which he injured last round, after the Celtics’ last defensive stop. Brown already has nine points.

11:10: Andrew Wiggins knocks down a 3 on the Warriors’ first possession but Jaylen Brown answered with one of his own to even the game right up.

11:50: Not often do you see a second jump ball just seconds into a game. But Draymond Green aggressively attacked Al Horford to force a tie up.

12:00: The Celtics win the jump ball and we are underway!

8 p.m.: Two-thirds of the usual ESPN on ABC broadcasting booth is in tonight. Play-by-play announcer Mike Breen is still out due to COVID-19, marking the third straight game he’s missed. Analyst Jeff Van Gundy is back for Game 2 after missing Game 1 due to COVID-19. Mark Jones will replace Breen again for the play-by-play call.

Cee Lo Green’s rendition of the national anthem is complete, and now tip-off is just minutes away!

7:50 p.m.: For those wondering, the Celtics will rock their usual road green jerseys in Game 2 and the Warriors will wear the usual home white jerseys.

7:35 p.m.: In some non-NBA Finals news, Celtics assistant coach Will Hardy is a candidate for the Utah Jazz head coaching job that opened up on Sunday, ESPN’s Adrian Wojnarowski reported. Former Celtics president Danny Ainge will play a significant role in the hire of course as he’s the CEO of the Jazz.

7:30 p.m.: Both teams will have the same starting lineups as they had in Game 1. Just in case you need a refresher…

7:25 p.m.: Jayson Tatum’s been paying homage to Kobe Bryant a lot the past week. He did so again in the outfit he wore to Game 2, which also included an homage to Michael Jordan.

7:10 p.m.: Both the Celtics and Warriors are bringing awareness to gun violence ahead of Game 2. Both teams wore “End Gun Violence” shirts with organizations listed on the back that help the cause.

Some Celtics players wore “We Are BG” shirts during Saturday’s practice in support of WNBA star Brittney Griner, who has been detained in Russia for over 100 days. 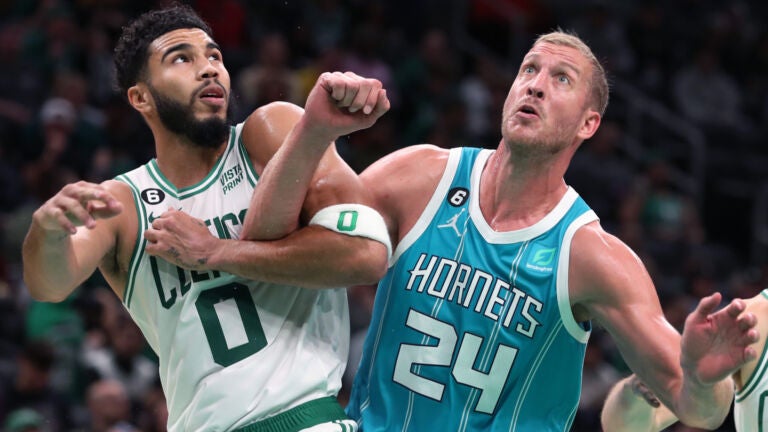