The Celtics have a crucial tool available in filling some holes in their roster — Evan Fournier’s $17.1 million traded player exception (TPE).

Here’s what you need to know about the TPE, when it expires, and who the Celtics could pursue.

What is a TPE?

A traded-player exception is a complicated but important piece of NBA salary cap maneuvering. Boiled down, it’s a chance for a team (in this case the Celtics) to absorb the contract of a player in exchange for draft compensation even if the team has no cap space. It is created when a team sends a player out and doesn’t absorb any salary in the process. Crucially, it is not cap space — the Celtics can’t offer free agents $17.1 million, they can only take on a player from another team for $17.1 million or less as part of a trade for draft picks (other players can’t be involved).

So when the Celtics opted not to make an offer on Fournier last offseason, they offered the Knicks a pair of (essentially) free second-round picks in order to create a TPE. The Knicks agreed. The implication at the time was clear: The Celtics value this TPE and believe they can get someone for it. Second-round picks aren’t the most valuable asset in a tool chest, but they aren’t something to simply give away either.

A TPE lasts for exactly one year from the time it was created (when a deal becomes NBA official, not “Adrian Wojnarowski or Shams Charania reported it” official).

When does the Fournier TPE expire?

Can the Celtics acquire multiple players with one TPE?

Surprisingly, yes. They cannot, however, combine TPEs. That’s too bad for the Celtics, who have a whole heap of TPEs that could have added up to an eyebrow-raising total.

So who could the Celtics acquire?

Here’s the $17.1-million question you presumably clicked on this article hoping to answer. The Celtics have a lot of options. Here are a few favorites.

Duncan Robinson ($16.9 million) – Robinson had a slightly down season from 3-point range, but he’s one of the best shooters in the league and forces a defense to panic and recover hard. The Celtics could desperately use a player with his gravity, and Robinson could probably use a team with a pair of wings as talented and versatile as Tatum and Brown.

The big drawback? Robinson’s contract, which will pay him a whopping $54 million over the next three seasons. That’s a lot of money for a player who would be the easiest defensive target in the rotation. Would his floor-spacing make up the difference? And, crucially, would the Heat even be willing to deal with the Celtics?

Kevin Huerter ($14.5 million) – Huerter isn’t quite as good a shooter as Robinson (or at least, he isn’t the perceived shooter Robinson is, which matters for gravity purposes), and he’s significantly smaller, but he’s a much more versatile offensive option and a little more effective defensively. The Hawks are reshuffling some things this offseason. If Huerter is available, he might be one of the more intriguing options.

The Hawks, of course, would need to be persuaded. A significant amount of draft capital would likely have to change hands.

Kentavious Caldwell-Pope ($14 million) – KCP is a perfect option for a team that wants to make a safe upgrade without shaking things up. He’s a good bench option, he certainly would not be a defensive target, and he’s been excellent from 3-point range for the last three years. Celtics fans dreaming of Huerter (or even Dejounte Murray in their more delusional moments) might be upset until they realize how much a bench guard of KCP’s caliber would have helped last year during the playoff run.

Kelly Olynyk ($12.8 million) – The Celtics could use a back-up big to help Al Horford and Rob Williams stay healthy during the season (with apologies to Daniel Theis, who struggled immensely in the postseason). Olynyk isn’t a rim protector, but he’s a good positional defender and offers additional floor spacing.

A bonus for the Celtics on Olynyk: If he doesn’t work out, the final year of his deal is only partially guaranteed at $3 million.

Luke Kennard ($14.4 million) or Norm Powell ($16.8 million) – See Huerter, but slightly less effective. Both would benefit greatly from the Celtics’ stars, both would space the floor, and both would require the Clippers to be willing to play ball. Both are on uncomfortably long deals, however. KCP or Olynyk would offer a lot more future cap versatility.

What if I don’t like any of your options?

Fair enough! The good news is you can go on Spotrac and daydream about any player making less than $17.1 million. As a fun bonus, if a player is making less than $6.9 million, you can slot him into the Juancho Hernangomez TPE while still maintaining the Fournier TPE. The Celtics have quite a few options this offseason. 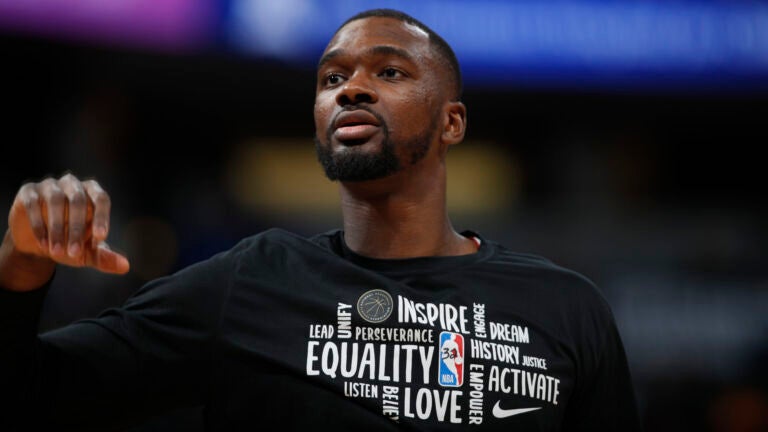