Matt Ryan banked in a buzzer-beating 3-pointer to clinch a 111-109 Summer League victory for the Celtics over the Bucks after a bizarrely officiated stretch closed the fourth quarter on a sour note.

1. We’ll start with Ryan, who later told reporters his ankle should be fine going forward after he tweaked it on this wild shot.

In his second consecutive Summer League game, Ryan looked like a confident gunner from 3-point range — 23 points off the bench, including 6-for-11 shooting from deep (which would have been 7-for-12 if a late attempt didn’t get waved off due to a questionable offensive foul on Juhann Begarin). The Celtics already inked Sam Hauser to a guaranteed deal, and maybe he’ll be a better fit going forward — he’s a catch-and-shoot specialist, which pairs nicely with the roster the Celtics have built.

But Hauser is yet to impress in Las Vegas (3-for-7 from deep on Monday). Meanwhile, Ryan looks incredible. He’s hitting spot-up 3-pointers, but he’s also making shots off movement and even a shot or two off the dribble. He has NBA size and NBA shooting. The Celtics might be well-advised not to let him go.

2. Mfiondu Kabengele and Trevion Williams looked like they might have a brewing center battle in the first game, but Kabengele gained some pole position on Monday. He finished with 15 points on 5-for-8 shooting, which included a confident 3-pointer, and he pulled down 11 rebounds to go with four assists. Williams’ passing is excellent, but Kabengele’s offense looked a little better on Monday — his gravity as a pick-and-pop center matters quite a bit, and he’s fully capable of rumbling to the rim and dunking, as well as throwing down a put-back dunk.

3. Brodric Thomas won’t be the most discussed player on the floor given Ryan’s brilliance and the bizarre finish, but he put up 14 points, eight rebounds, four assists, two blocks and two steals. Defensively, he looked like a player who learned from Ime Udoka’s aggressive, defense-first mindset all season. Maybe most importantly for his future NBA prospects, he went 4-for-8 from 3-point range and is now 6-for-12 from three in Las Vegas.

4. J.D. Davison had another big assist total with six, but he fumbled away five turnovers and missed some makeable shots en route to a 1-for-5 shooting performance.

Some good: Davison does a lot of different things, and when he grabs a rebound and pushes the pace, good things seem to happen.

Some bad: Davison has all this explosion, but for some reason he can’t seem to finish around the rim. Either he needs to slow down a little bit, or his touch leaves something to be desired for now.

That came about a minute after this one.

Begarin’s game needs a lot of work — he was 1-for-4 from 3-point range with some ugly misses, and he finished with seven turnovers. But he clearly has NBA size and athleticism, and he’ll probably be able to sort through what he needs to figure out defensively. He’s also just 19-years-old which — as Celtics assistant Alex Barlow noted to Adam Himmelsbach of The Boston Globe — can be difficult to remember given his size and athleticism. A lot of development needs to happen, but Begarin still has a lot of time for development.

6. Can Roxbury native A.J. Reeves get some minutes already?

7. You’d be excused for not knowing who Sandro Mamukelashvili was prior to Monday’s game, but the Bucks forward absolutely pummeled the Celtics — aggressive drives, tough defense, big finishes around the rim and even three triples en route to a game-high 28 points. Mamukelashvili was a second-round pick last year and spent a lot of time in the G-League. Summer League stats don’t mean much, but he certainly looked like an NBA player on Monday.

8. Monday’s game was electric, but it ran headlong into a rush-hour traffic jam in the final minutes as officials and scoreboard operators tried to figure out why the score appeared to be wrong. First they gave the Bucks an extra point. Then they seemed to change their minds and flipped a 108-107 Bucks lead into a 108-107 Celtics lead. The process was extensive and killed the momentum in an otherwise oddly exciting Summer League game.

9. You didn’t really think officiating a Summer League practice would change Grant Williams did you?

Williams — who was seated courtside — barked back and forth (apparently in a friendly manner) with Bucks players Pat Connaughton and Bobby Portis, who were seated further down the court.

If there’s one thing we know about Williams, it’s that the man really likes to talk.

The Celtics take on the Grizzlies on Tuesday at 8 p.m. EST. 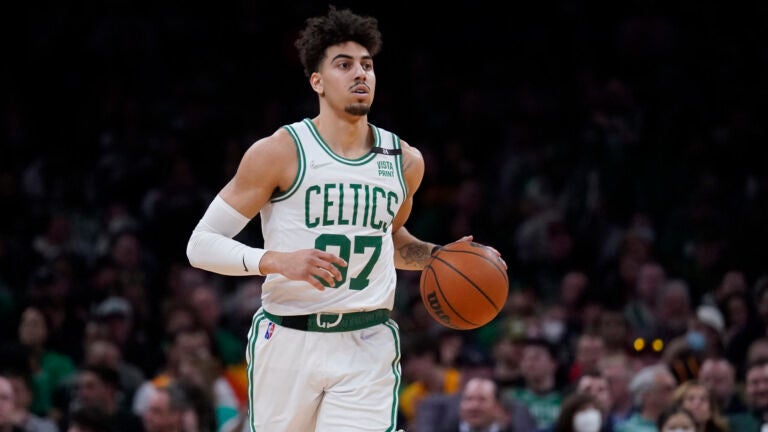