The Celtics introduced two of the newest members of the roster on Tuesday, giving Malcolm Brogdon and Danilo Gallinari a chance to speak to the media for the first time since both were acquired this offseason.

Shortly after free agency began earlier this month, the Celtics acquired Brogdon as part of a deal with the Pacers that included Daniel Theis, Aaron Nesmith and a 2023 first-round pick.

Later, they signed Gallinari to a two-year deal at the taxpayer mid-level exception.

“We’ve had a chance to spend time, all of us, over the last 24 hours or so and it’s really clear how good of a fit both of these guys are,” Brad Stevens said.

Here are five takeaways from their lengthy introductory presser.

Both players had unique reasons to come to Boston.

When Brogdon was in high school, Stevens already wanted him to be part of his organization.

Stevens was the coach at Butler at the time, and he recruited the versatile guard “hard,” according to Brogdon.

“We had already known his reputation,” Brogdon said. “He had already gone to the championship game and Final Fours and really done everything you can do in college.”

“He said all those kind words, but then he met [Virginia coach] Tony [Bennett], and it was over,” Stevens quipped. “But we’re glad he’s here in Boston, finally.”

Brogdon has long been a favorite of Stevens, who praised him from afar in press conferences whenever the Celtics played against his teams. Now the duo can connect while Brogdon is still in his prime

“This is everything I’ve wanted,” Brogdon said. “To be able to get back to this level, to be able to compete with guys that want to win a championship and that are all in, that want to sacrifice to win. So it’s very fortuitous for me to be here and I think it’s the perfect time for me.”

Gallinari, meanwhile, grew up a Celtics fan and studied Larry Bird’s game when he was a kid. Joining the team he cheered for as a child and simultaneously competing for a championship was an opportunity he couldn’t pass up, even for a little bit more money.

“When the Celtics came on the table it was almost like a no-brainer,” Gallinari said. “You walk even in this facility, you look around and see what’s going on around the banners and the history and everything the Celtics were about, it was an easy choice.”

The Jays approve of the moves.

Both Brogdon and Gallinari said good things about the Celtics’ young stars Jayson Tatum and Jaylen Brown, but Brogdon in particular has grown close with Brown over the last few years. Brown and Brogdon work together as vice presidents with the Players Association, but Brown’s activism really drew Brogdon’s attention — Brown led a march in Atlanta as part of the Black Lives Matter movement in 2020, and Brogdon wanted to be a part of it.

“That’s when I really got to know pretty well and sort of realized what he’s really about,” Brogdon said. “For him, it’s bigger than basketball, it’s about life. It’s about being an activist. It’s about being a good person. So always been a big fan of his and I’m really excited to play with him.”

Both Tatum and Brown reached out to the new additions when it became clear they were headed to Boston.

“You don’t see a lot of players, a lot of great players like them that’s young but they already have a lot of experience,” Gallinari said. “So, of course when you look at a team, one of the reasons why I came here is them. So I talked to them already. I’m excited and we’re all here working for them, working for the team, to make sure that we all succeed.”

“My goal is to come here and make them better,” Brogdon added.

Brogdon is ready to work with Marcus Smart.

According to Stevens, Smart was one of several Celtics players he spoke to immediately after making the move to acquire Brogdon. Stevens classified Smart’s reaction to the news as “jacked.”

The Celtics have made it clear that Smart’s starting role is guaranteed, and Brogdon is expected to be a super-sub sixth man. Smart started at point guard for the first time in several years last season and relished the opportunity to lead his team to the playoffs.

Brogdon gave his stamp of approval to that set up and said he plans to push and be pushed by Smart.

“I think Marcus is one of the biggest winners that we’ve seen in this league,” Brogdon said. “I think that’s why Boston loves him, and the organization loves him. You can’t put your finger on what it is about him, but he’s a winner. …

“I really think he and I will play well together. We have different skill sets, but we both want to win so bad it doesn’t matter. All of the other stuff is distraction and noise. We’re going to come together and make this thing work.”

Gallinari acknowledged the time he lit the Celtics on fire.

“It was great to win, to break records for the franchise, for the NBA — I think I was the only player to have 10 threes coming from the bench for the NBA and nobody ever made 10 threes in Hawks history, something like that,” Gallinari said. “It was a great game, but we won that game. That was the most important thing.”

“By a lot,” Stevens said wryly.

A Celtics staffer asked rhetorically if Gallinari knew who was coaching that team at the time. Gallinari played along.

“Was it you? It probably was you,” Gallinari said to Stevens. “Bad scouting report.”

“Why would we guard you?” Stevens said. “Leave him open, let him wear himself out by making every one.”

The Celtics can still spend if necessary.

Stevens suggested the Celtics might still make one more addition at center, while complimenting Luke Kornet. If the roster stood as currently constructed, Kornet would be the team’s back-up.

“We’ll probably add one more person that can play in that area,” Stevens said. “But we’re really believing in Luke as not only depth — he can obviously fill out the roster — but also be ready to help us and help us win. I think he’s at that stage where he can do that.

“But we’re still looking, and we’ll still add at least one more body at that, whatever we call the five position nowadays.”

Stevens was asked whether he had been given any specific guidelines about spending by ownership.

“Obviously, we have not only a trade exception now, but trade exceptions that we can use again towards the trade deadline,” Stevens said. “And that’s all about just finding the right deal. If it’s the right trade to be made, we have the green light to do that.” 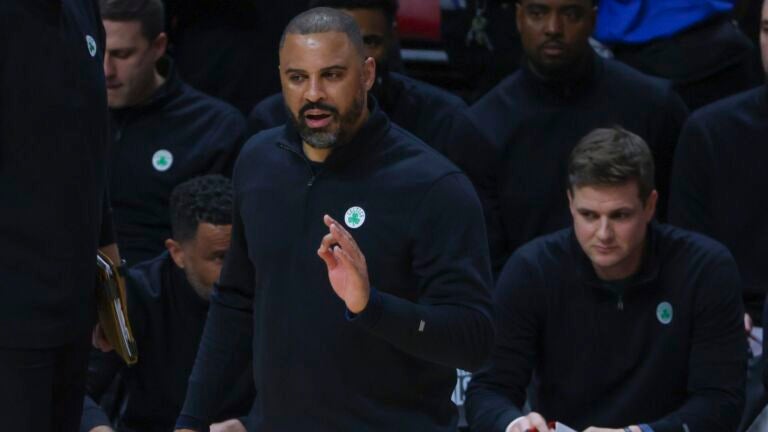