The medal of freedom is an award that by definition goes to “an individual who made an especially meritorious contribution to the security or national interests of the United States, world peace, cultural or other significant public or private endeavors.” Few professional athletes, of course, have ever made more meritorious contributions to culture through professional sports than Bill Russell, which made his honor in 2011 particularly poignant.

In his comments, Obama noted that people would sometimes approach Russell and ask the trim, 6-foot-9 man whether he was a basketball player.

“Surprisingly, he gets this more than you’d think,” Obama quipped.

Russell’s answer, however, was always “no.” He was a man who played basketball. Basketball was what he did, not who he was.

“Bill Russell the man is someone who stood up for the rights and dignity of all men,” Obama said at the time. “He marched with [Martin Luther] King. He stood by [Muhammad] Ali. When a restaurant refused to serve Black Celtics, he refused to play in the scheduled game. He endured insults and vandalism, but he kept on focusing on making the teammates who he loved better players and made possible the success of so many who would follow.

Two years later in 2013, the statue was built, which meant for the final nine years of his life, children in Boston did see a monument to Russell — a man who was a basketball player. Shortly before the statue was unveiled, Obama got a sneak peek along with Russell — a moment that was documented by photographer Pete Souza.

Russell died on Sunday. Obama sent out a tweet thread.

“Today, we lost a giant,” Obama wrote. “As tall as Bill Russell stood, his legacy rises far higher—both as a player and as a person.”

Again, Obama noted Russell’s record of activism — that he marched with the likes of King and Ali.

“For decades, Bill endured insults and vandalism, but never let it stop him from speaking up for what’s right,” Obama wrote. “I learned so much from the way he played, the way he coached, and the way he lived his life. Michelle and I send our love to Bill’s family, and everyone who admired him.”

Other political figures and activists reached out via social media as well to offer their remembrances of Russell, including Bernice King — the youngest daughter of Martin Luther King — as well as Bill Clinton, Billie Jean King, and others.

“What a trailblazer,” Bernice King wrote. “… A champion in many ways that matter. Thank you and rest in power, Sir.” 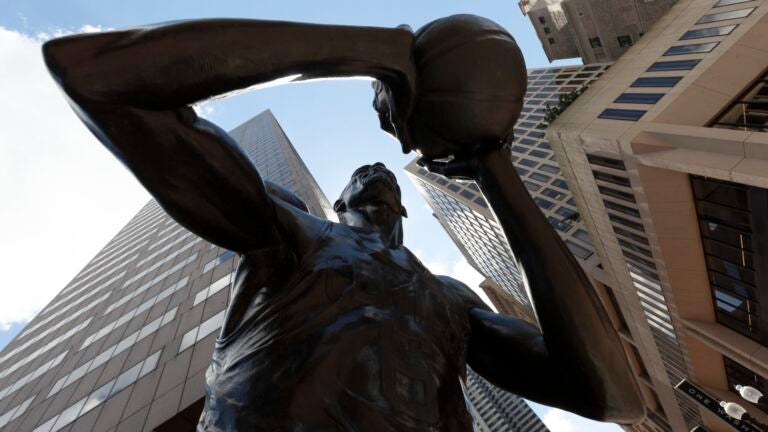 'We honor Bill Russell’s legacy as a Celtic, a champion, and a crusader'