Dating back to the days of the Boston Garden, visiting NBA players have disliked the visiting locker room when they’ve faced the Celtics. Now in the TD Garden, that remains to be the case.

Bucks guard Pat Connaughton and Heat guard Duncan Robinson discussed all the issues they have with the Celtics’ visiting locker room on the latter’s podcast, “The Long Shot.”

Citing their local ties, both believe it’s intentional that the Celtics have the “worst visiting team locker room.”

“With it being Boston and us being two guys from the New England area and [the Celtics] being our favorite team growing up, it’s got to be on purpose,” Connaughton said.

Connaughton began to specify what in particular made him think it was the worst locker room in the league.

“I’m talking like, the carpet that’s matted down to the point where it’s worn out in areas,” Connaughton said. “The lockers are tighter than my shoulders, there’s only enough for 15 guys, maybe 16.”

Robinson interjected to make an even bigger declaration.

“It’s like the old-school showers that’s got the rut all over the tile,” Connaughton continued. “And, there are those old-school ice baths that are not usable, like those oval tins that are stacked up on top of each other. … (They) have been there since … way before we’ve been in the league. (They) prevent you from being able to use any other showers, so there are only two available ones.”

They also took issue with the Celtics’ iconic parquet floor.

“The parquet, there’s little spaces in between it,” Robinson said. “The fact that they haven’t somehow closed it, it seems like a liability.”

“They put the court together, so it’s like a bunch of squares, they push it together, so there’s still space in between them,” Connaughton added. “They’ve got bolts in it that are like silicone or dried glue on top of it, it’s bizarre.”

Robinson added that “there’s a lot of dead spots” on the parquet floor and both agreed that they can “feel” the cracks.

“I’m not going it impacts [our performance] directly, but it definitely doesn’t help it,” Connaughton said.

As mentioned earlier, players complaining about the visiting locker room at the Celtics’ venue dates back to the Boston Garden days. The Lakers believed the Celtics tampered with their locker room during the three NBA Finals series in the 1980s by dialing up the heat while turning off the hot water in the showers and nailing the windows shut. Red Auerbach denied it was intentional. 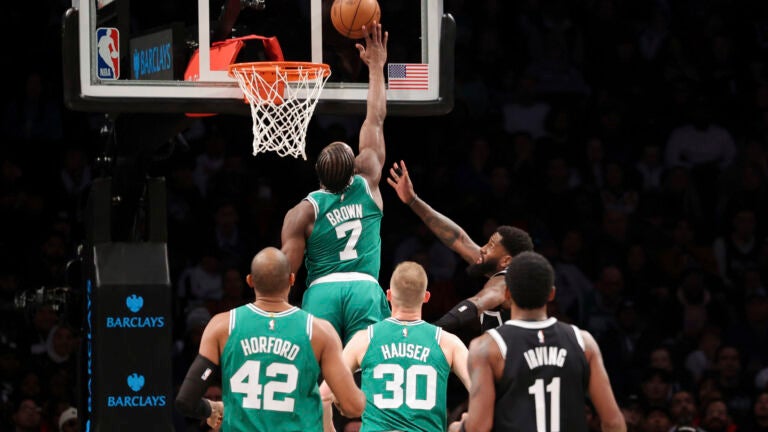