After an offseason in which the Celtics were publicly linked to a possible Kevin Durant trade, one of the team’s leaders is simply happy to have the core back for another year.

Marcus Smart, speaking on the “The Rich Eisen Show” earlier this week, candidly acknowledged that the prospect of having a future Hall of Fame talent such as Durant in Boston would’ve been enjoyable.

“It definitely would’ve been cool to have Kevin Durant,” said Smart. “I think any team, anybody would tell you [he’s] one of the best players in the world, of course you want him on your team.

“But at the same time, Jaylen Brown and Jayson [Tatum], those two guys who are young, up-and-coming superstars, and we just made it to the finals. So, for me, I was glad.”

“Why not run it back?” Smart added.

And as the 28-year-old reigning NBA Defensive Player of the Year noted, he’s used to trade rumors at this point.

“For me, my name has been in trade talks ever sine I got here,” said Smart. “So I really couldn’t think too much on it because I’ve been doing this a long time, I know how it goes.”

Looking back at the 2021-2022 season, Smart said that the team was able to gain momentum following the trade deadline.

“For us, we became more stable after the trade deadline,” Smart explained, noting that the removal of any additional trade possibilities helped build more consistency.

“I think early on in the year, we had a new coach, we had new guys, we’re trying new lineups, nobody really knew exactly what was a sure thing, and I think that hurt us,” he said.

Despite the slow start, Boston eventually transformed into an Eastern Conference champion.

“It’s either going to work or you’re not going to play, so this is how we’re going to do things,” Smart said of Udoka’s approach. “And it wasn’t just with one player, it was the whole team from the guys to the coaching staff, and it kind of gave us a sense of relief that, ‘OK, he knows what he wants to talk about.’ He’s not coming out here looking scared, afraid, nervous and so he’s going to give us confidence to do the exact same thing.”

Smart was asked to explain the difference between Udoka and former Celtics coach (now president of basketball operations) Brad Stevens.

“Brad is a more laid-back guy,” Smart began. “Killer smile, can’t really stay mad at him. Whereas Ime, he doesn’t care about you something too much. He’s going to let you know exactly how he feels.

“He’s more in-your face a little bit, he’s more aggressive than Brad,” Smart added. “He was a player himself. So he gets it, he understands it, and he understands a little bit more of how to get the most out of players, and what to say, when not to say things, and how to say them.”

As for whether or not the prolonged trade rumors regarding Durant (and involving several Celtics players) will have any long-term effect, Smart had a straightforward response. 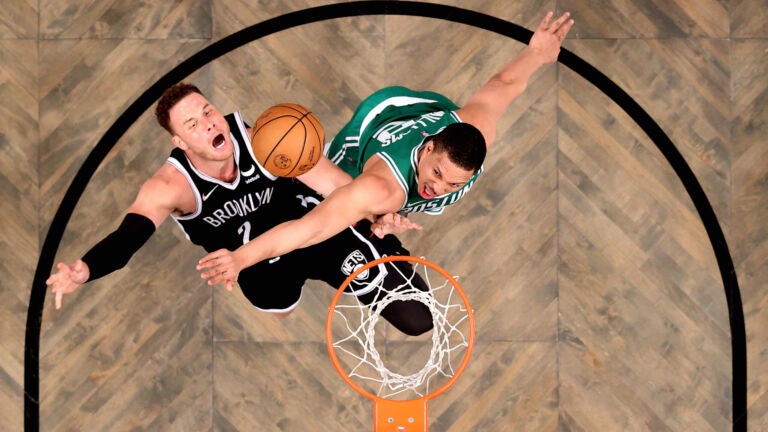