Believe it or not, the Celtics begin training camp in one week — just three months and 11 days since the Warriors sent them into the offseason with a stinging Game 6 victory in the NBA Finals.

The Celtics have a lot of questions to answer this year, which they enter as a favorite to contend for a title.

Tatum has a habit of starting seasons slowly and finishing strong, which — to be sure — is better than the alternative. But with a strong Eastern Conference as incentive to win as many games as possible, Tatum’s start could be an important piece of the Celtics’ puzzle this season. When the season begins in October, will he look like the clear All-NBA first-team player (and potential MVP candidate) who scored 30.4 points and shot 41.4 percent from 3-point range after the All-Star break, or will he once again open the season as a high-volume-but-somewhat-inefficient scorer?

The Celtics used Tatum as one of their primary ball-handlers last season and entrusted him to both score and facilitate. If Tatum takes another step as a passer and creator when defenses collapse, his scoring numbers could stay down while his impact numbers — which were in the 99th percentile last season — remain high.

But the Celtics have historically been at their best when Tatum is primarily a scorer who finds teammates when the defense freaks out about his scoring. Maintaining that could be crucial early.

To make an All-NBA team as a guard last year, Brown would have had to beat out at least one of Devin Booker, Luka Doncic, Steph Curry, Ja Morant, Chris Paul, and Trae Young. To make it as a forward, he would have needed to dislodge one of Giannis Antetokounmpo, Tatum, DeMar DeRozan, Kevin Durant, LeBron James, or Pascal Siakam.

Those are all impressive names, but especially in the forward category, Brown could make up some ground this season. If he does, Brown — already a wealthy man entering the third year of a $106 million deal — could be in line for a huge raise. An All-NBA team would qualify Brown for a designated veteran extension, which can be up to 35 percent of the salary cap. In other words, a max extension for Brown would jump from $36.9 million per year to just under $42 million by current projections, which are probably conservative.

Brown has always been an enthusiastic offseason worker. This year, he has significant financial motivations as well.

How will Malcolm Brogdon fit (and can he stay healthy?)

On paper, Brogdon was the perfect offseason pick-up by Brad Stevens — a scoring sixth man who can both play on and off the ball when the Celtics need a ball-handling boost. Brogdon averaged 19.1 points and 5.9 assists per game last year with the Pacers.

The only issue? Brogdon only played 36 games last season, battling a variety of injury issues. In his six NBA seasons, he played more than 70 games just once (his rookie year) and more than 60 just twice. Brogdon does not have a history of good health, and the Celtics don’t have a history of good luck in that regard. Keeping Brogdon (and others, who we will get to) healthy will be an important part of next season.

How do the Celtics play both Derrick White and Brogdon?

Marcus Smart remains the Celtics’ starter, but they have two very solid — and perhaps overqualified — options behind him in Brogdon and White.

White was solid after the Celtics acquired him last year, and the promise of a full training camp offered tantalizing potential. On the other hand, the Celtics thought White would be a better 3-point shooter playing next to Tatum and Brown, which never materialized.

Brad Stevens invested a lot of assets in White, and the former Spurs guard’s defense shouldn’t be discounted — going from Smart to White in the rotation prevented the Celtics from losing much defensively even when the Defensive Player of the Year sat down. But teams only have so many minutes to allocate, and Ime Udoka might need a good spreadsheet to figure out the best way to rotate Smart, White, and Brogdon while keeping everyone happy.

How healthy can the Celtics keep Robert Williams and Al Horford?

This was going to be one of our questions even before news broke on Tuesday afternoon that Williams would miss four-to-six weeks after undergoing an arthroscopic knee procedure that will cost him training camp and likely some of the season.

Williams and Horford will both be crucial components of the Celtics’ season, and keeping them healthy may be a challenge. Williams has dealt with injury issues his entire career. Horford turned 36 in June. The only true backup big on the roster is Luke Kornet, who spent last season in the G-League (Grant Williams can also play small-ball center). The Celtics resisted signing a bargain-bin center in the offseason, other than Mfiondu Kabengele on a two-way contract.

Brad Stevens seems to think Kornet can contribute, and people around the team speak very highly of his potential.

For the sake of Williams and Horford, they better be right.

How much can Sam Hauser contribute?

Hauser’s role was pushed into the spotlight when the Celtics lost Danilo Gallinari — perhaps for the season — to a torn ACL, which he suffered while playing for the Italian national team. The Celtics signed Gallinari to be a sharp-shooting big forward who can hold his own defensively and space the floor off the bench for their slashers.

Hauser has a gorgeous jumper and has drawn glowing praise as a spot-up 3-point shooter from his teammates in the past.

“If you see him shoot, it’s absolutely absurd,” Grant Williams said earlier this summer. “I don’t know who I would take in a shooting competition between anybody besides Sam Hauser.”

This season, Hauser will have an enormous opportunity to prove them right.

What can Grant Williams add to his game?

Over the years, Williams has improved exponentially in several areas, and last year may have been his most important jump to date — Williams hit 41.1 percent of his threes, turning him from a spot contributor into a genuine rotation player with some real potential.

So what does Williams do now? Defenses have to respect his jumper, so learning to attack closeouts consistently is a natural follow-up. Williams is a smart player too, so working on his feel as a passer would add even more to his tool bag.

This is an important year for Williams, who has not yet come to terms with the Celtics on a rookie extension. He already looks like a valuable role player in the making, but cementing that status this season could make him a lot of money.

What do the Celtics envision for Payton Pritchard?

Pritchard sits in the most precarious spot from last year’s rotation — the Celtics have shooters and more than enough ball-handlers this season, which makes Pritchard’s status on the team feel a little redundant. The Celtics also have Juhann Begarin and Yam Madar biding their time overseas and J.D. Davison on a two-way contract, if they want to work with a prospect guard.

Pritchard is a good young player and can heat up quickly. Is that enough to keep him on the floor this season?

Who makes the end of the roster?

Justin Jackson, Jake Layman, Brodric Thomas, Denzel Valentine, and Noah Vonleh will join the Celtics for training camp competing for a roster spot, and all five have NBA experience. Thomas and Jackson both played for the Celtics’ Summer League team, and Thomas in particular looked like a potential NBA player with a well-rounded game and a nice jumper. Davison and Kabengele could both be elevated to the full roster as well, opening up their two-way slots.

Mostly, the Celtics need versatility. Their eight-man rotation is pretty clear — Tatum, Brown, Smart, Horford, Rob Williams (when healthy), Grant Williams, Brogdon, and White. Others can fill in the gaps, but if that rotation starts taking injury hits, the Celtics might need players who can plug into a lot of different positions. Players who can defend multiple positions seem likely to get preferential treatment.

What happens if the Celtics don’t win the title?

We know, we know, you don’t want to think about this possibility before the season. Still, the Celtics have a lot of expectations, and if they come up short, plenty of people — from fans to the front office to ownership — will be very disappointed, given the opportunity this team appears to have and their recent history of falling just short. What happens then?

Everyone seems happy and content in Boston, and they should be — the Celtics broke through and made the Finals just over 90 days ago, and they are set up to contend for years to come. But only one team can win a championship each year, and breaking through to the Finals won’t be quite as satisfying this season if the Celtics don’t cap it off with a ring.

In the past, the Celtics have always been able to look to the future, even when they lose. Isaiah Thomas, Kyrie Irving, Gordon Hayward, and Kemba Walker couldn’t get it done? No problem, Jayson Tatum and Jaylen Brown were still on the rise.

Now the future is here. Tatum and Brown have arrived as superstars and have proven they can lead a team to the Finals. The Celtics hope to be the team that Tatum and Brown pull over the hump, with some help from an improved supporting cast. 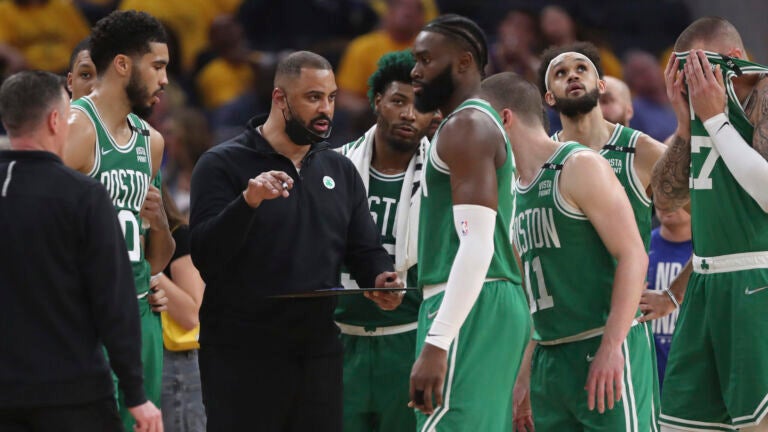