The Celtics claimed their ninth straight win on Friday with a 117-109 victory over the Pelicans that was occasionally close but never felt in doubt.

1. The Celtics essentially decided the game in the first quarter, racing out to a 40-25 lead thanks to red-hot shooting from 3-point range — the kind of shooting that leaves opposing fans and commentators shaking their heads and throwing up their hands, but which Celtics fans have more or less come to expect this season. As a team, the Celtics scored a staggering 1.78 points per possession on spot-up opportunities, per Synergy Sports.

On a night when Tatum and Brown once again weren’t their best, Derrick White and Al Horford in particular picked up the slack, combining to make their first eight attempts from deep (they finished the game a combined 10-for-13).

White punished the Pelicans in a variety of ways — not just with his 3-point shooting, but also slashing off the dribble. In his last five games, White is averaging 16 points on 49.1/48.1/93.8 shooting, as well as 4.8 assists and 0.8 turnovers. Prior to the season, White felt a little superfluous in the mix with the Celtics’ other talented guards like Marcus Smart and Malcolm Brogdon. Now he feels indispensable to multiple lineups and is making a fairly strong case that the Celtics should continue starting him even when Robert Williams returns.

Of course, doing so would mean sending Al Horford to the bench, and Horford is shooting 63.6 percent from the field and 59.1 percent from 3-point range in his last five games. Best of luck to Joe Mazzulla as he tries to navigate that conundrum.

2. Speaking of Malcolm Brogdon, he returned Friday after missing four games with a hamstring injury. He shot just 1-for-8 from the floor and struggled to finish over the Pelicans’ size at times, but he appeared to be moving pretty well. Getting him back at full strength would be a big boost if the Celtics need to give Marcus Smart extended time off (which, despite Smart’s recent excellence, might not be a bad idea — Smart is nursing ankle inflammation, which is an aggravation of an old injury from last year).

3. Is three games a shooting slump? If so, Tatum can officially be classified as “slumping.” Tatum is now 6-for-29 (27 percent) from 3-point range in his last three games, and 21-for-59 (35.6 percent) overall from the field. On Friday, he finished 6-for-18 and 2-for-10 from deep, despite a quick start. At times, he didn’t appear particularly interested in shooting or finding his own shot, preferring instead to let his teammates cook (and particularly in the first quarter, they were cooking).

In those three games, Tatum has also dished out 10, seven, and 10 assists respectively — 27 assists to go with six turnovers. He impacts the game at a high level even when he isn’t making shots.

Still, the Celtics will need a little more from Tatum on nights when they don’t make 14 3-pointers in the first half.

4. Jaylen Brown had a game that looked remarkably similar to his playoff run — he picked his spots well, scored efficiently, grabbed some rebounds, and stuffed the stat sheet … and he turned the ball over seven times, several of which were live-ball turnovers that led to easy baskets on the other end.

“We’ve got to take care of the ball better, so I’ve got to be better when I’ve got the ball in my hands,” Brown told Abby Chin on the NBC Sports Boston broadcast.

Brown was a net positive on Friday, despite his struggles, but seeing some of his old habits re-emerge — especially when he was the leader of the Death Bench lineup — was a little concerning.

5. For just the fourth time this season, Sam Hauser finished with a negative plus/minus (-2). Hauser was part of a bench unit that got run over twice when the Pelicans hit the gas and made up some ground, and he finished just 2-for-5 from 3-point range — a cold night for Hauser, by his standards thus far.

The Pelicans fell into the trap of attacking him and blowing up their offense in the process. Teams love to target Hauser, and while he isn’t an A+ defender, he’s not bad enough to warrant an entire offensive scheme.

6. Joe Mazzulla let the Celtics play through their struggles once again when the Pelicans rallied, opting against calling a timeout to stop the bleeding. After the game — when he was asked yet again about the strategy — he noted that there is a “50-50” chance of a timeout working anyway.

“I think you have to go through [opposing team runs] as a team,” Mazzulla said. “And you have to build an awareness for your team as to what’s going on. Sometimes I like the fact that we have to execute through a run instead of calling a timeout through a run. So it’s a feel thing, and there are times when you’re going to have to do it, but in order for us to be a great team, we have to be able to handle those situations.”

Mazzulla’s strategy worked on Friday. One can’t help but wonder if Mazzulla will be quicker to call timeout when the playoffs roll around, but he seems deeply comfortable — and a little defiant — about his strategy so far.

The Celtics have two days off before traveling to Chicago to take on the Bulls on Monday. 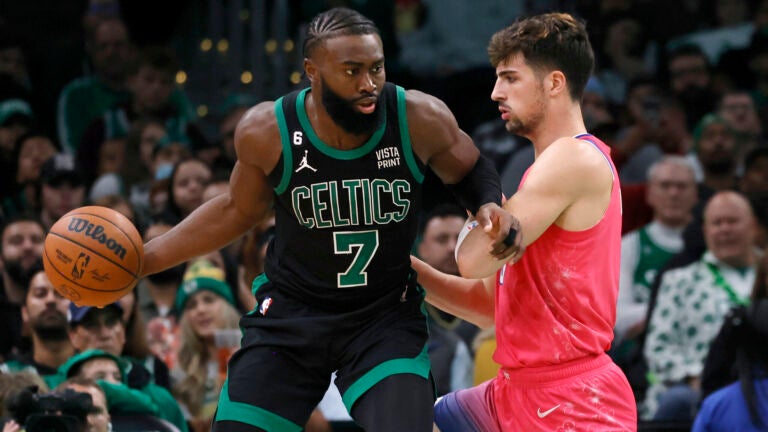