Al Horford has tacked a ton of mileage onto his 36-year-old frame.

Between the regular season and playoffs, Horford has logged 1,134 games over his 16 seasons of pro basketball. Once a featured frontcourt star, Horford has evolved into a seasoned veteran on the Celtics’ roster.

But amid all those reps, the power forward’s drive hasn’t waned this season.

The 2023 Celtics hold the same championship aspirations, with an even higher ceiling.

Jayson Tatum is an MVP frontrunner. Jaylen Brown is in line for another All-Star bid. Marcus Smart has augmented his game into a facilitator role. Malcolm Brogdon adds another stalwart off the bench.

But if the Celtics want to orchestrate another title run, they’re going to need Horford’s defensive fortitude and mettle down low to steel them against the grind that awaits.

Horford reinforced his vital role in Boston’s potential championship push in the C’s last two matchups against the Warriors and Raptors.

With so much talent on the wing, the Celtics aren’t a team that does most of its damage in the paint. By extension, Horford often falls down on the list in terms of regular conduits of offense for Joe Mazzulla’s squad.

But when matched up against smaller lineups, Horford still has the means to land punches and pile up points. Look no further than Boston’s victory over the Warriors on Thursday, with the Celtics outscoring Golden State, 52-30, in the paint.

Horford was the beneficiary of that mismatch, especially with Steve Kerr pulling Kevon Looney from his starting lineup.

Without an option to counter Horford, the Celtics’ big man feasted. In the first quarter alone, Horford scored 10 points and hauled in five rebounds, keeping his team afloat on a night they shot 39 percent from the field.

“I joked with Al, he came up and looked like he was 25 today,” Tatum said postgame. “Two days off, I said he need more two days in a row because he came out and set the tone. He really did. And we all kind of followed behind that the rest of the night. Al was big for us the whole game, hit the big 3 late, but just the way he started kind of set the tone for us the rest of the game.”

Boston will welcome Horford’s offensive contributions when the opportunities present themselves. But the University of Florida product’s primary duties on the court center around his defensive acumen.

Horford also made his presence felt against the Warriors down the other end of the court, including a highlight-reel swat against Jordan Poole.

Saturday’s road tilt in Toronto wasn’t as fruitful for Horford on offense. After posting 20 points and 10 rebounds against Golden State, he only sank two of his 10 shot attempts against the Raptors.

But in crunch time, Horford stalled multiple scoring opportunities for Toronto, forcing a pair of jump balls against Pascal Siakam and Scottie Barnes.

Unlike momentum-shifting blocks or timely rebounds, some of Horford’s defensive contributions aren’t tabulated on the box score.

But when the stakes are raised in the postseason, that extra jump ball or effort to steer a driving player out of the paint can be the difference between a series victory or a season-ending defeat.

“The end of the game is winning time,” Horford said postgame, per MassLive’s Souichi Terada. “You have to make something happen, and Joe and I talked on the sideline. He just talked about like, ‘Hey, go win this game for us.’ I just had to find a way to make plays any way that I could. At that point, you’re just trying to win.”

Horford made the play that the Celtics needed to snuff out a potential buzzer-beater scenario for Toronto.

With the Raptors trailing by two with 3.8 seconds left on the clock, Horford snatched the ball away from Siakam past halfcourt. The steal secured Boston’s ninth-straight victory.

As the final buzzer sounded, Horford sprinted straight off the court and down the tunnel before his teammates even realized what happened.

Why the rush? Horford provided the answer on Twitter later that night.

That work ethic hasn’t faded for Horford. Not with the aging forward still fixated on hoisting an 18th banner into the Garden rafters. 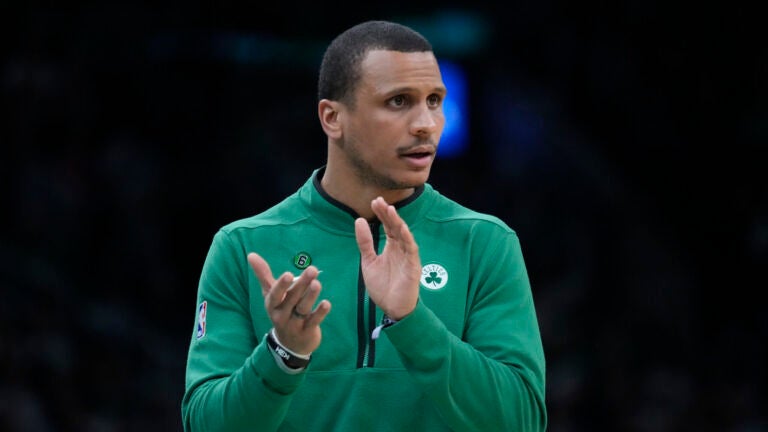