The Boston Athletic Association announced on May 28 that the 2020 Boston Marathon was canceled — a first in its 124-year history. Registered participants have been offered a full refund and the option to participate in a virtual alternative; to run the 26.2 mile distance in their own neighborhoods within a 6-hour time frame between September 7 and 14, and to participate virtual panel discussions and champions interviews.

Some runners were grateful to the Boston Athletic Association for being diligent about social distancing restrictions with their early announcement of the race’s cancellation. Others were frustrated that a virtual event was not a “true” alternative and confused about what the announcement meant for charity runners. We asked runners for their reactions and plans for September. Scroll ahead to hear from eight runners on what a canceled marathon means for their training and fundraising.

Responses have been lightly edited for grammar and clarity

This will be known as the pandemic year

“Maybe the course won’t be Boston but the spirit still will be. Yes, I will be running the 124th Boston “virtual” Marathon and doing so to show my support for the race’s history and tradition. When finished, I will add this experience to my list of Boston Marathon stories and memories. This will be known as the pandemic year. Not the way that I envisioned running my 25th Boston, but hopefully I will be back in the future to again enjoy the race with my fellow runners, the course, the fans and the full Boston Marathon experience. I feel terrible for first-time runners, especially the charity number runners and I hope they will be able to join in future races as well. This year provides meaning for ‘Boston Strong,’ we will get through this.” — Joe Floyd

Running a virtual marathon will be nothing like the real thing

“I’m a charity runner and was very disappointed at the way the marathon was canceled. I completely expected it to be canceled from this date, but I was hoping that all registrants would have the option to ‘defer’ to the next event, whether 2021 or later. To simply cancel with no regard for those that still want to run an in-person event at some point in the future, seemed brutal. Running a virtual marathon will be nothing like the real thing and would be a very hard challenge to take on. I am taking time to decide if this is something I want to continue training for versus taking a break and hoping that Boston 2021 takes place (and that I can somehow get a registration for what will now be an even more competitive registration process).” — Martin Coster

“I am disappointed for all the first-time runners who are not going to get to experience the “real” race — the iconic, challenging course and, of course, the amazing crowds. That said, I encourage everyone who has trained so hard for the race to stay motivated and stay in shape. Chances are, especially if you are a charity runner, you are in the best shape of your life right now. Let your physical condition today be your new baseline. Build on it, and change your life for the better.

As far as running the virtual event goes, I’m in! I had readied myself emotionally for the cancellation of the physical race and am looking forward to running 26.2 miles in my hometown of Andover, Mass. on September 14. I’m thinking of asking friends and neighbors to run a mile with me along the way so that I can share some of the experience with them while also working to raise additional money for One Mission, the great charity I run for that does whatever it takes to help children with cancer — and their families — through cancer treatment.” — Dan Mees

“I will not be running in the virtual alternative. I’m running in honor of my cousin Vanessa Marcotte, who was killed by an act of violence while out on a walk near her family home in August 2016. Vanessa was a BU graduate and Boston was her favorite city, so it’s really important for me to run the marathon route in her honor.

It’s unfair that thousands of runners raised over 27 million dollars for small non-profits in our community, and they don’t get a bib to run in 2021. The 2020 Charity Runners put our hearts into fundraising. We did not do this to run 26.2 miles through our neighborhoods. Given that the VTM Foundation is a small non-profit, we’re not guaranteed bibs next year, which means I might not have the chance to run for Vanessa. She always wanted to run a marathon, and never had the chance. I trained for months to fulfill her goal.” — Caroline Tocci

Why would I want to make my first-ever marathon a solo event?

“The 2020 marathon in April was going to be my first-ever marathon in celebration of my 50th birthday. When they moved it to September, I convinced myself it would be something special and unique even if it meant training in the heat of the summer. I’d also still be 50. Now that they have changed it to a virtual run, I doubt I’ll be participating. Why would I want to make my first-ever marathon a solo event? I’d also completely miss out on the “Right On Hereford, Left On Boylston.” Now I’m wondering if I’ll even bother in 2021. Running it for my 51st birthday doesn’t have the same symbolic gesture. I was running for a charity, Michaels Miracles, and at this point, I don’t know what their plan is for 2021. Will I even be invited to participate? Will it get postponed or cancelled next year? So many questions.” — Tim Paradiso

“I am disappointed. I understand, and do not disagree. Holding it virtually is not a true alternative — maybe if they had offered this as an alternative in March with a month left to go in our original training I might have gone for it. However, marathon training through the hottest part of the summer for a virtual race, for most runners is most likely not going to happen. In my honest opinion the t-shirts are purchased, the medals cast, just send them out as souvenirs of the race that never was and move on. 2021 here we come.” — Jeff Coccoluto

I ran a virtual 26.2 miles in my hometown

“I had a feeling this was going to turn into a virtual race and I think that is the best decision for everyone. I chose to raise money for a charity I love and that is the important part. I was successful. On April 20, 2020, I ran a virtual 26.2 miles in my hometown of Medfield with the support of my husband and friends cheering along the side lines at a distance. I will not be running in September, but I wish all the runners their proudest race.” — Beth Rumul

Happy that the decision was made to keep us all safe

“So sad that the run won’t occur but happy that the decision was made to keep us all safe. I am a charity runner who has completed 7 Boston Marathons. I ran in 2013 and was stopped at mile 24 due to the bombings that year. I ran it in 2015. This would have been my 9th Boston Marathon as a charity runner. This year I was running for South Shore Hospital. As an African American physician in the frontlines, it meant a lot to me to try to keep my mind and my body healthy in case I do get COVID-19. Marathon training helps achieve just that. So, I will most definitely be running the virtual Boston Marathon in September 14, 2020!” — Dr. Diana Perry 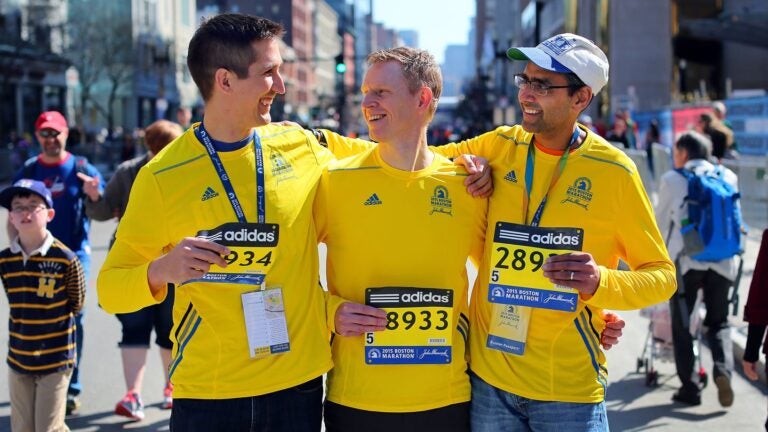