Some of the Boston Marathon’s most inspiring runners won’t necessarily be standing on the podium.

These 12 runners — like many others — will demonstrate perseverance in the face of adversity as they push themselves to tackle 26.2 miles. Some have accomplished impressive athletic feats. Others have given back to their communities. All have refused to give up.

Whether you’re running or cheering from the sidelines, this group will remind you what Marathon Monday is all about. 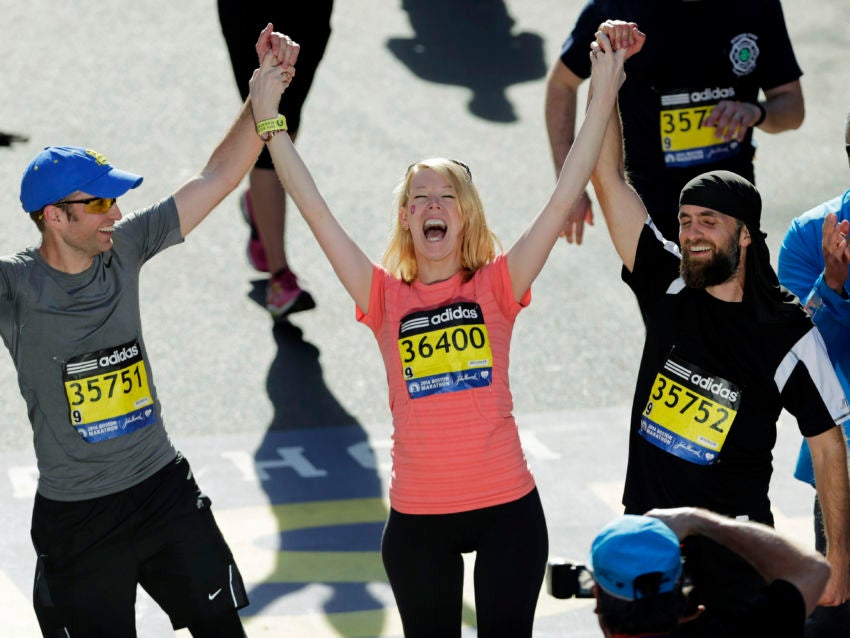 Timothy Haslet, left, and David Haslet, right, celebrate with their sister Adrianne Haslet at the finish line of the 118th Boston Marathon, after she completed a short distance of the course in Boston.

1. Adrianne Haslet: After losing her leg below the knee in the 2013 bombings, Haslet wowed the world and danced across the finish line less than a year after making a vow to resume her career as a professional ballroom dancer. On Monday, she hopes to check off another goal: completing her first marathon. Her team, “#AdrianneStrong,’’ will raise funds for the Oklahoma City-based Limbs for Life Foundation. (Boston.com)

2. Simon Wheatcroft: Though legally blind since the age of 17, this U.K. runner won’t let his disability stop him from completing his second Boston Marathon. The ultra-marathoner ran from Boston to New York in 2014, covering a distance of about 240 miles in nine days. Wheatcroft will be guided by author Heather Armstrong and personal trainer Nicole Perry to represent Team With A Vision, which benefits the Massachusetts Association for the Blind and Visually Impaired’s statewide network of vision rehabilitation services. (Dooce.com)

3. Carol Chaoui: This Wellesley mom, living with breast and thyroid cancers since her diagnosis in 2009, has found peace and friendship through running. She’s completed seven marathons in six years, including four Bostons. Chaoui is running for the Dana Farber Cancer Institute and has raised over $62,000. (Chaoui’s fundraising page) 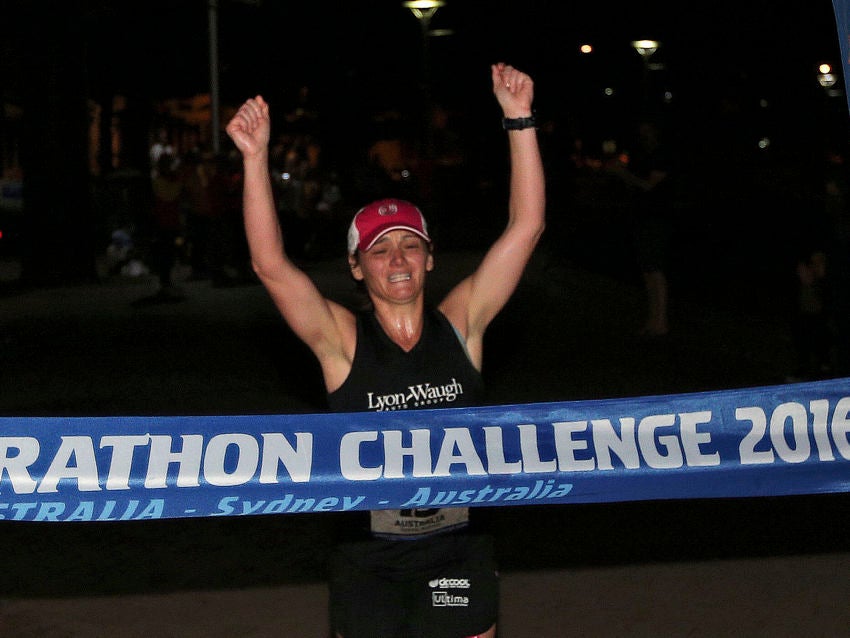 Becca Pizzi crosses the finish line to win the seventh and final leg of the World Marathon Challenge.

4. Becca Pizzi: This Belmont native earned her claim to fame in January when she became the first American woman to compete in the World Marathon Challenge, running in seven marathons on seven continents in seven days. The 35-year old mother and small business owner will run her 16th Boston Marathon and 52nd career marathon on Monday. (The Boston Herald)

5. Peter Riddle: In 2013, Riddle, who was at the Forum restaurant when the second bomb exploded, helped rescue a victim who lost a leg in the attacks. He turned to running and fundraising as a way to alleviate his post-traumatic stress disorder. Running Boston for three different charities in three years, he’s raised over $80,000, according to CharityTeams. This year, Riddle is running for the David Ortiz Children’s Fund and has raised over $21,000. (Riddle’s fundraising page)

6. Greg Sullivan: The Boston College baseball team’s assistant coach will be running his first ever marathon in support of Pete Frates, who was diagnosed with ALS in 2012 and has since become a national advocate for ALS research. Sullivan, who is running for the Frates ALS Research and Support Fund, has worked around the team’s cross-country schedule to train for the marathon. He’s even forgone team bus rides to stadiums, using it as an opportunity to fit in a training run. (BC News) 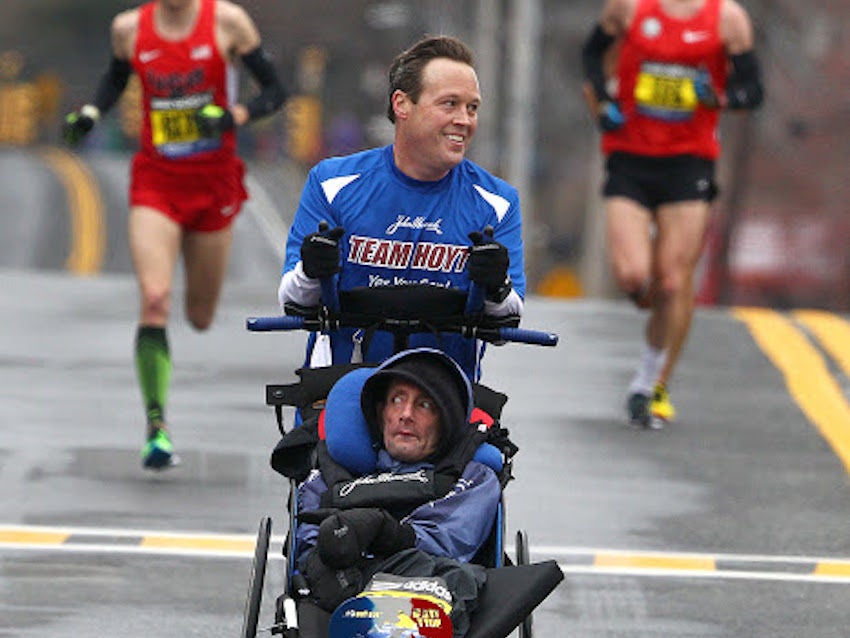 Team Hoyt in Natick during the 2015 Boston Marathon.

7. Team Hoyt: The father-son duo of Dick and Rick Hoyt has long been a fixture of the marathon. Rick has cerebral palsy and his father pushed him in a modified wheelchair along the course’s 26.2 miles 32 times since 1980. Though Dick and Rick ran their final Boston Marathon together in 2014, their team is still going strong. Teammate Bryan Lyons has taken over pushing Rick, and the two are raising money for the Hoyt Foundation. (Team Hoyt)

8. Sara Stevens: Stevens ran her first Boston Marathon in 2008 after her brother completed treatment for pediatric cancer. The Mass. General nurse is running again for her friend and co-worker, Jessica Kensky, a survivor of the Boston Marathon bombings who has been receiving treatment as she adjusts to her new life as a double amputee. Stevens is a member of Team Caring for a Cure, a group started by nurses to improve the journey of patients and families with cancer. (Massachusetts General Hospital)

9. Marc Fucarile: Fucarile, a Marathon bombing survivor, isn’t running his first Boston Marathon: He’s hand cycling it. Over the past year, Fucarile received treatment at the Walter Reed Medical Center in Bethesda, Maryland, a center known for treating military amputees. Now he’s trying to give back to the community that has been helping him by raising money for Team Achilles Freedom, a nonprofit for wounded military members.  (Fox 25) 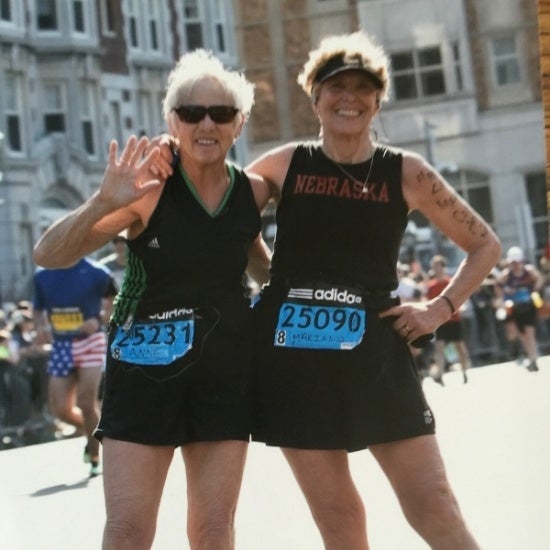 The 72-year-old best friends are tackling the Boston Marathon together.

10. Mariana Phipps and Ann Medeiros: These 72-year-old best friends and long time running partners hope to exit the running world in style by completing their seventh marathon together. Medieros at first did not qualify for Boston due to health issues, so her friend reached out to CharityTeams’s director, Susan Hurley, to secure her a bib through the Alpha Omega Council. Now the two hope to show that age is just a number. (Ann Medieros’s fundraising page)

11. Joe Gagne: In 2014, the Dedham native was told it would be a year before he would walk again after an accident left him with a serious spinal cord injury. Seven months later, he was training for a half marathon. Now he’s taking on Boston, running on behalf of the Travis Roy Foundation. (Travis Roy Foundation)

12. Dr. Terri Halperin: The mother of four has been training for this year’s marathon to honor her late husband Dr. Michael Davidson, a cardiovascular surgeon who was shot and killed inside Brigham and Women’s Hospital last year. The couple had planned to run it together to mark Halperin’s 40th birthday. Halperin is raising money for a fellowship at Brigham and Women’s in her husband’s honor. (Boston.com)