Roughly 30,000 runners took on the 26.2 mile course from Hopkinton to Boston on Marathon Monday. Here’s a look at some of the most memorable moments from the 120th Boston Marathon.

1. Here’s what it was like at the starting line

And they’re off! The 120th running of the #bostonmarathon.

2. Tom Brady thanked Adrianne Haslet for being an inspiration

Two years ago I was lucky enough to meet Adrianne Haslet, a survivor of the 2013 Marathon bombings. She’s on the course…

3. One runner seized his moment early in the race

He ran the first two miles of the race in 9 minutes, 53 seconds.

4. Mark Wahlberg was at the finish line early filming scenes for his upcoming movie 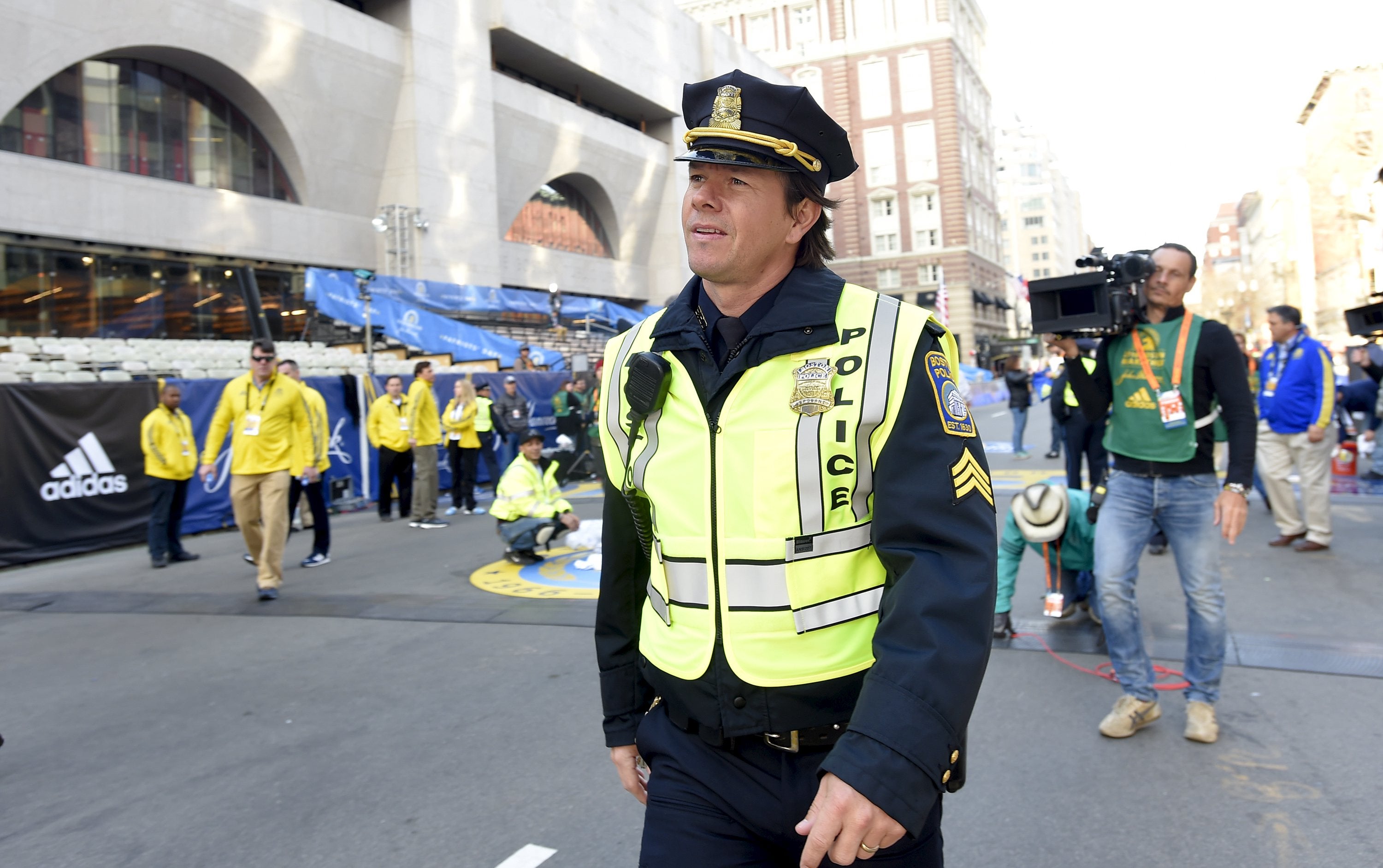 Mark Wahlberg was at the finish line early Monday morning filming a scene for Patriots’ Day.

5. Defending women’s champion Caroline Rotich dropped out of the race 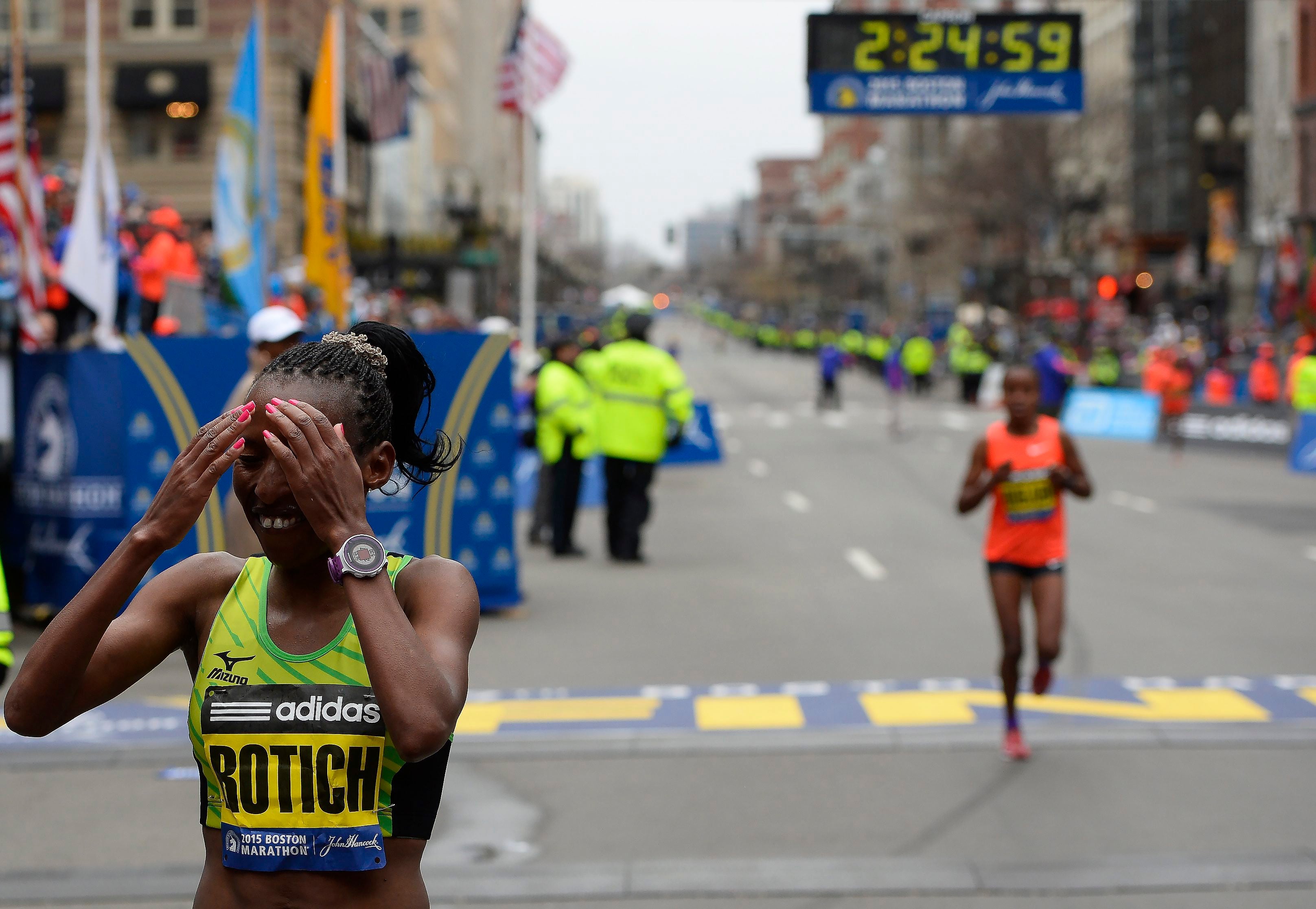 Rotich, who won the 2015 marathon, dropped out at the 5-mile mark on Monday.

6. A tiny fan made this adorable sign that made no sense

There were many unique signs along the course on Monday. This dad took to Twitter to share his daughter’s message to runners… We still haven’t figured it out.

7. There was a dramatic finish in the men’s wheelchair race 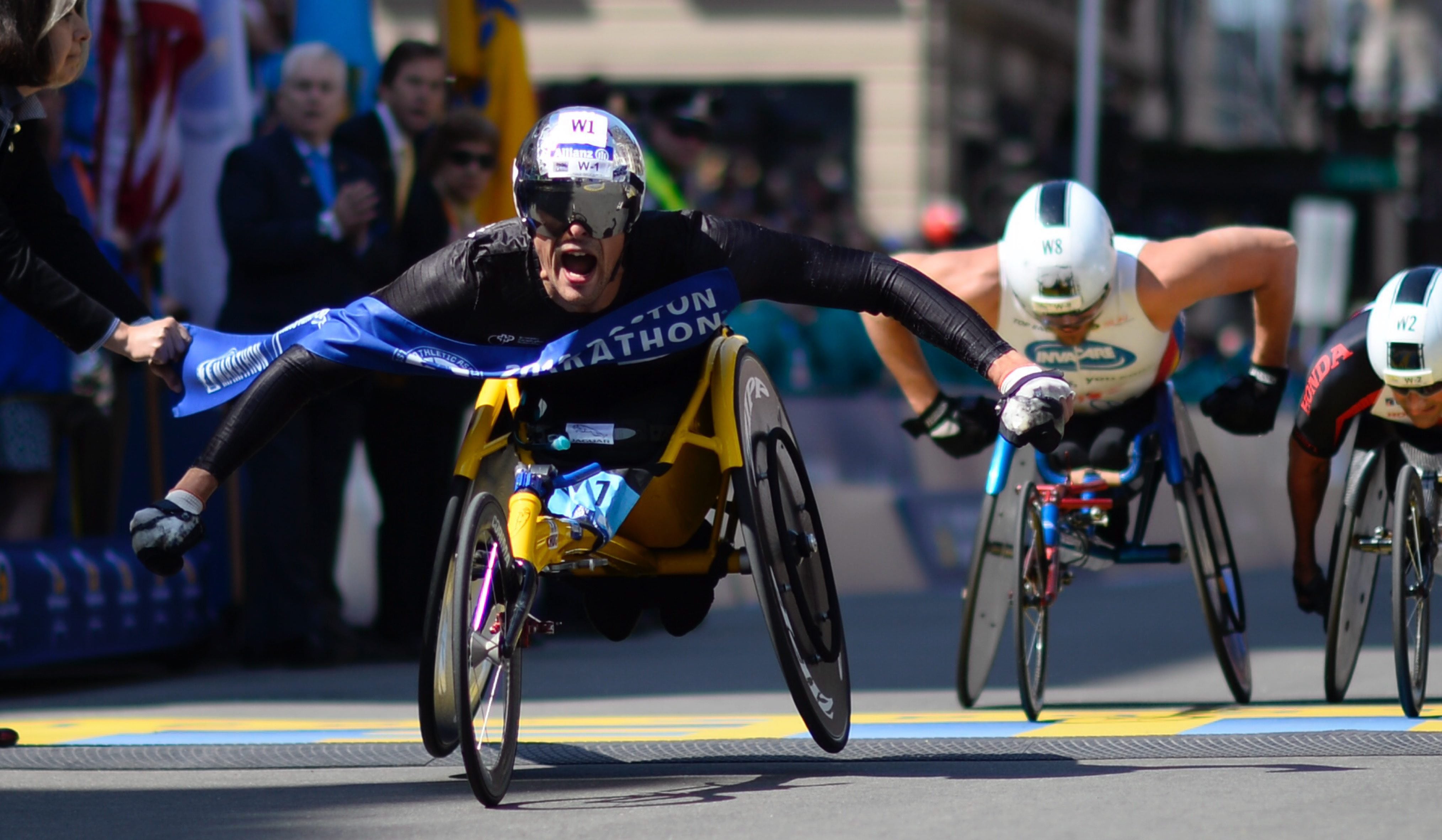 8. A guy wearing nothing but tiny American Flag underwear and a bowtie ran the Marathon

The runner was spotted on the course wearing an American flag Speedo (and a bowtie) by MetroWest Daily News reporter Danielle Ameden.

Bauman will be portrayed by Gyllenhaal in the upcoming movie Stronger.

11. A giddy Lemi Berhanu Hayle celebrated his win with a victory leap

The 21-year-old men’s division winner leapt with joy after crossing the finish line.

12. Meb Keflezighi captured the spirit of the Boston Marathon in one photo

Meb Keflezighi, the 2014 Boston Marathon champion, shared the photo of two runners helping to carry a third to the finish line.

13. This runner fought through pain to finish

ALL HEART. Check out this runner fight SEVERE CRAMPING to cross finish line with help at #BostonMarathon #WBZ pic.twitter.com/Syy4ZaJpOp

Michel Rojkind pushed through the pain after collapsing against the barricades just feet from the finish line.

14. Bombing survivor Patrick Downes said he ran with Boston in his heart 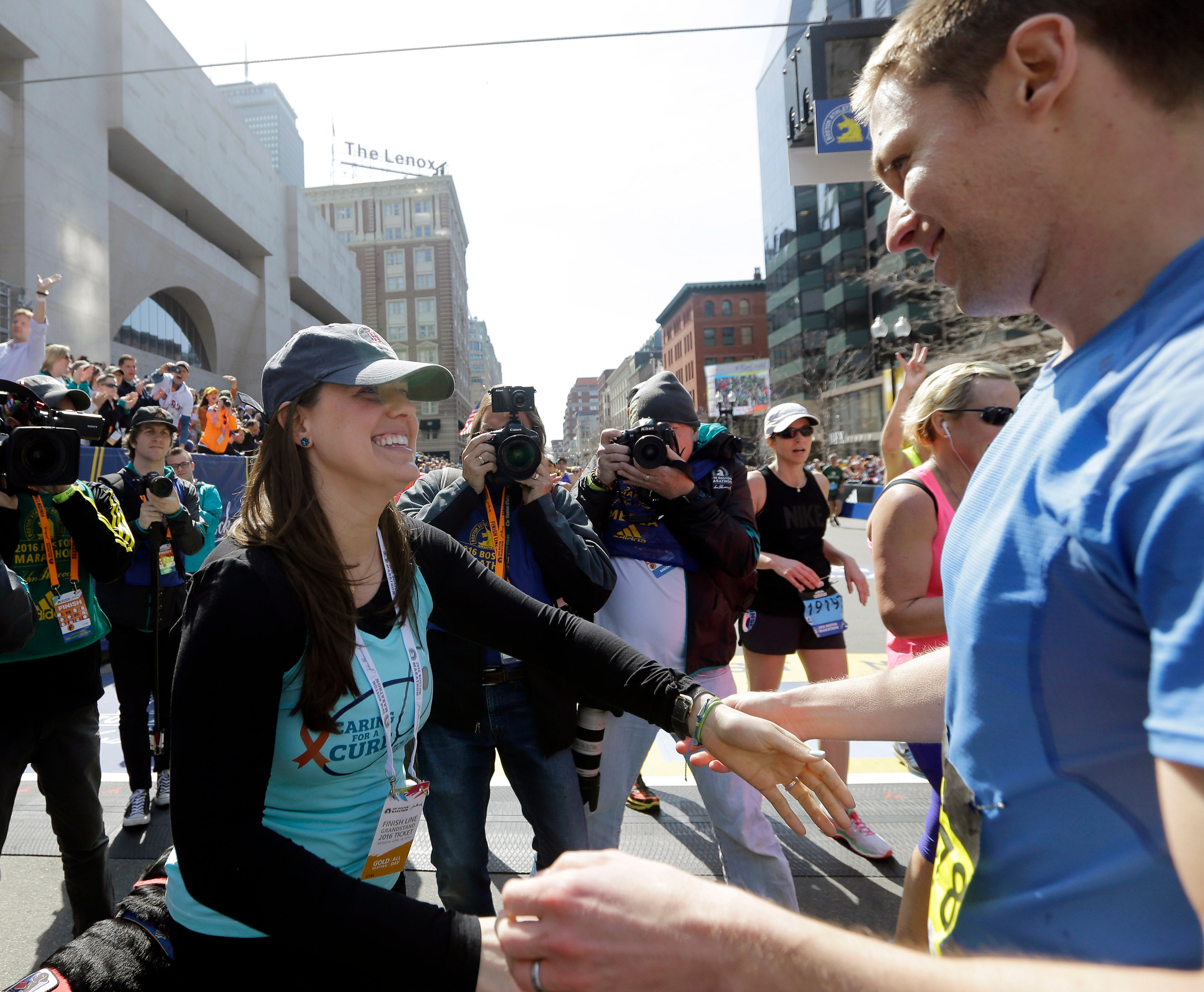 Boston Marathon bombing survivor Patrick Downes was met at the finish line by his wife, Jessica Kensky, who also is a survivor of the 2013 attack.

“I think our city is a really, really beautiful city,” Downes said at the finish line. “I’m so proud to be from here. I’m so proud to have taken part in this.”

15. This photo of Jeff Bauman and Erin Hurley at the Marathon finish line is beautiful 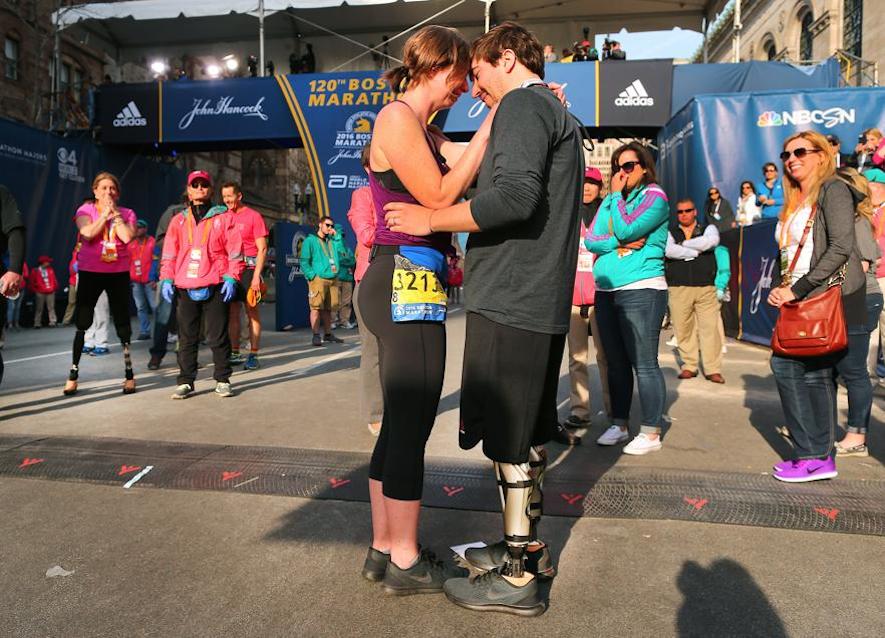 Marathon bombing survivor Bauman was at the finish line when his wife completed the race and their embrace is pure inspiration and love.

Haslet paused before she stepped across the finish line on her prosthetic just before 7:30 p.m., three years after the bombing. 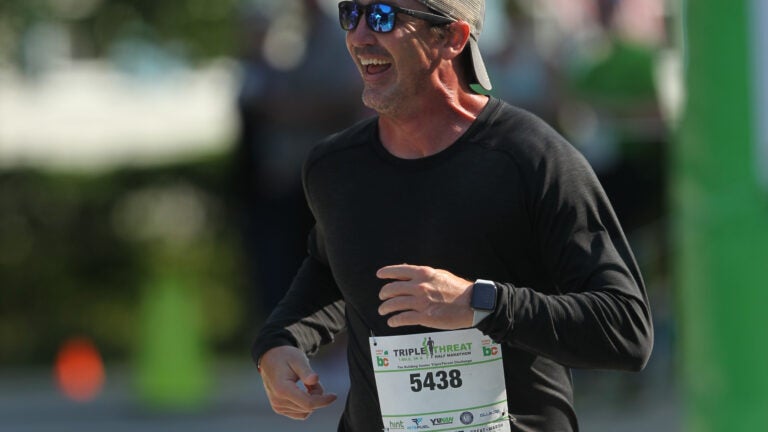 After recovering from a stroke, Tim Rafferty is running Boston