On Monday night, Becca Pizzi will be celebrating a year of firsts with a big slice of Adam’s peanut butter cup cheesecake from The Cheesecake Factory—and she couldn’t be happier.

Pizzi is now not only the first American woman to complete seven marathons on seven continents in seven days, but she also is the first woman to be proposed to on the mound at Fenway Park before a game. She was given the honor of throwing out the first pitch before the Red Sox game on Sunday.

“It’s been a really incredible year for me,” Pizzi told Boston.com. “When we walked back off the field, a friend joked, ‘Of course you were the first to get proposed to [on the mound].That’s how you do things!'”

“Complete strangers were holding signs with my photo on it saying ‘She said yes,'” she said. ” I felt like a celebrity today running because so many people knew me.”

As if this day couldn’t get any better, your Rio Olympic Marathon team, Amy Hastings, Desi Linden and Shalane Flanagan, I cant think of better good luck charms for tomorrow!

Pizzi was also recognized by the Boston Athletic Association on Thursday, along with Bobbi Gibb, the first woman to run the entire Boston Marathon, and Meb Keflezighi, the last American to win it.

“It’s so humbling; every single day I feel like the luckiest woman in the world,” she said. “I don’t know how I’m going to top these past few days.”

My last Boston Marathon as a Pizzi!!!! Joseph Stilwell 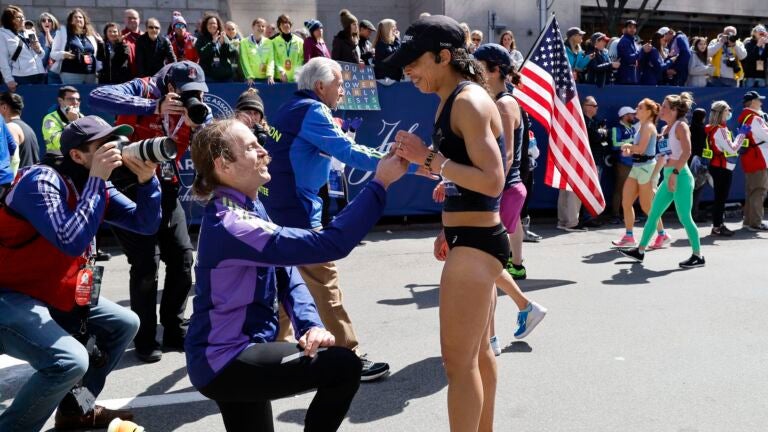