New Englanders searching for a dose of motivation this Monday won’t need to look far.

The Boston Marathon is packed with thousands of runners aiming to complete the challenging 26.2 mile course — an inspiring feat on its own. But these 13 runners’ reasons for running — like many others — embody what Marathon Monday is all about.

Some are runners whose extreme athletic feats will make you want to lace up your sneakers and hit the pavement. Some are selflessly dedicating themselves to missions greater than themselves.

Some you’ll recognize. Some you won’t. All will remind you that anything is possible when you put your mind to it. 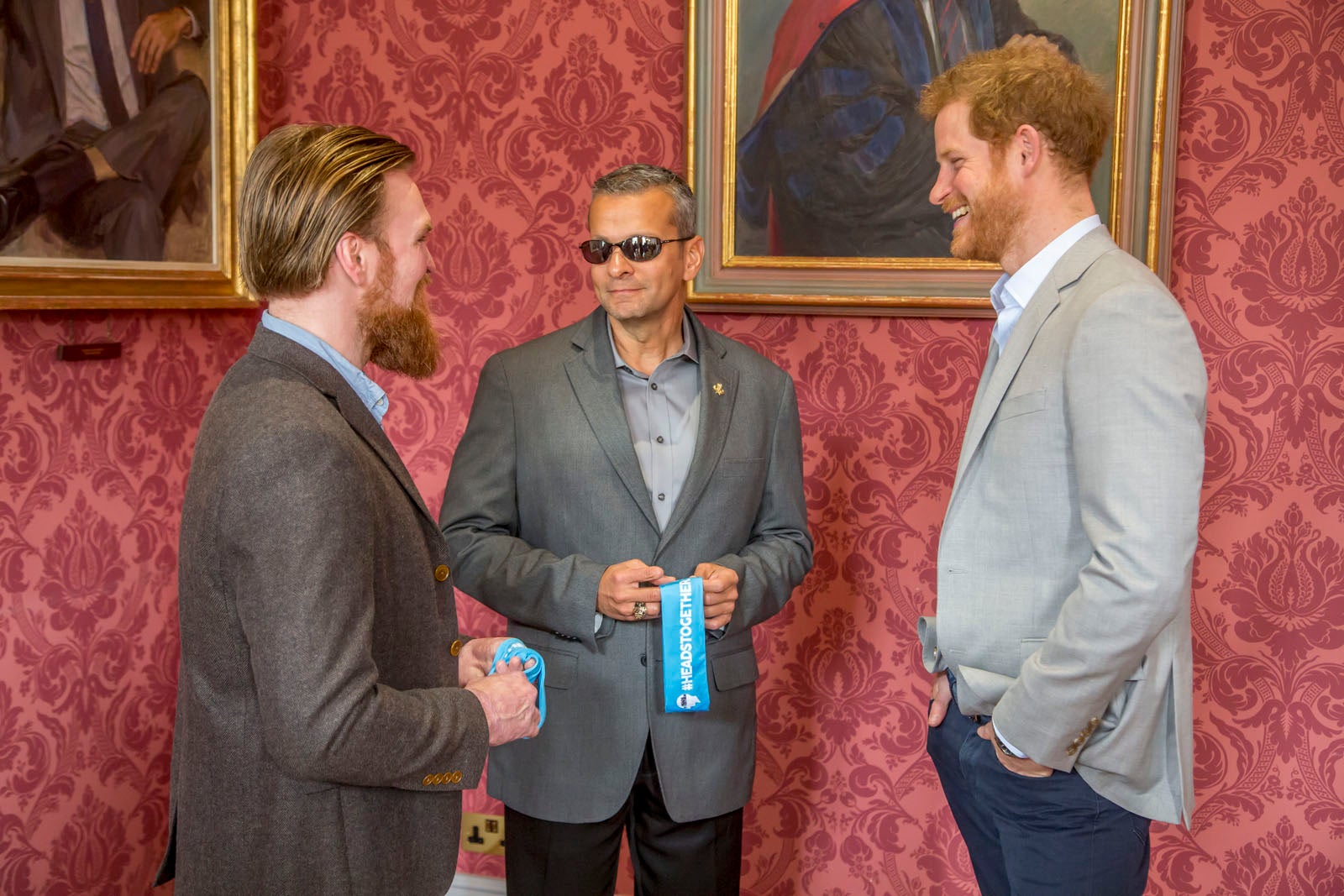 British and American war veterans Karl Hinett, 30, and Ivan Castro, 49, are looking to add Boston to their cumulative list of over 200 completed marathons this Monday.

Though they didn’t know each other during their tours in Iraq, both runners were injured in bombings and turned to running as a recovery tool. Hinett was left with burns over 37 percent of his body. Castro was blinded in both eyes. Despite their health hurdles, both men said marathon running has brought them a new mission and new friendship.

“Our countries have a great partnership,” Castro said. “As soldiers in the U.K. and U.S., we train, we fight, we bleed, we recover, we heal together so come Monday we are going to run this side by side. We’re going to start and cross the finish line together.”

Their efforts are funded by The Royal Foundation’s campaign Heads Together, which aims to end the stigma around military mental health, and their funds raised in Boston will benefit the Home Base Foundation, a partnership between the Red Sox Foundation and Massachusetts General Hospital. The duo is also taking on the London Marathon together less than a week later. 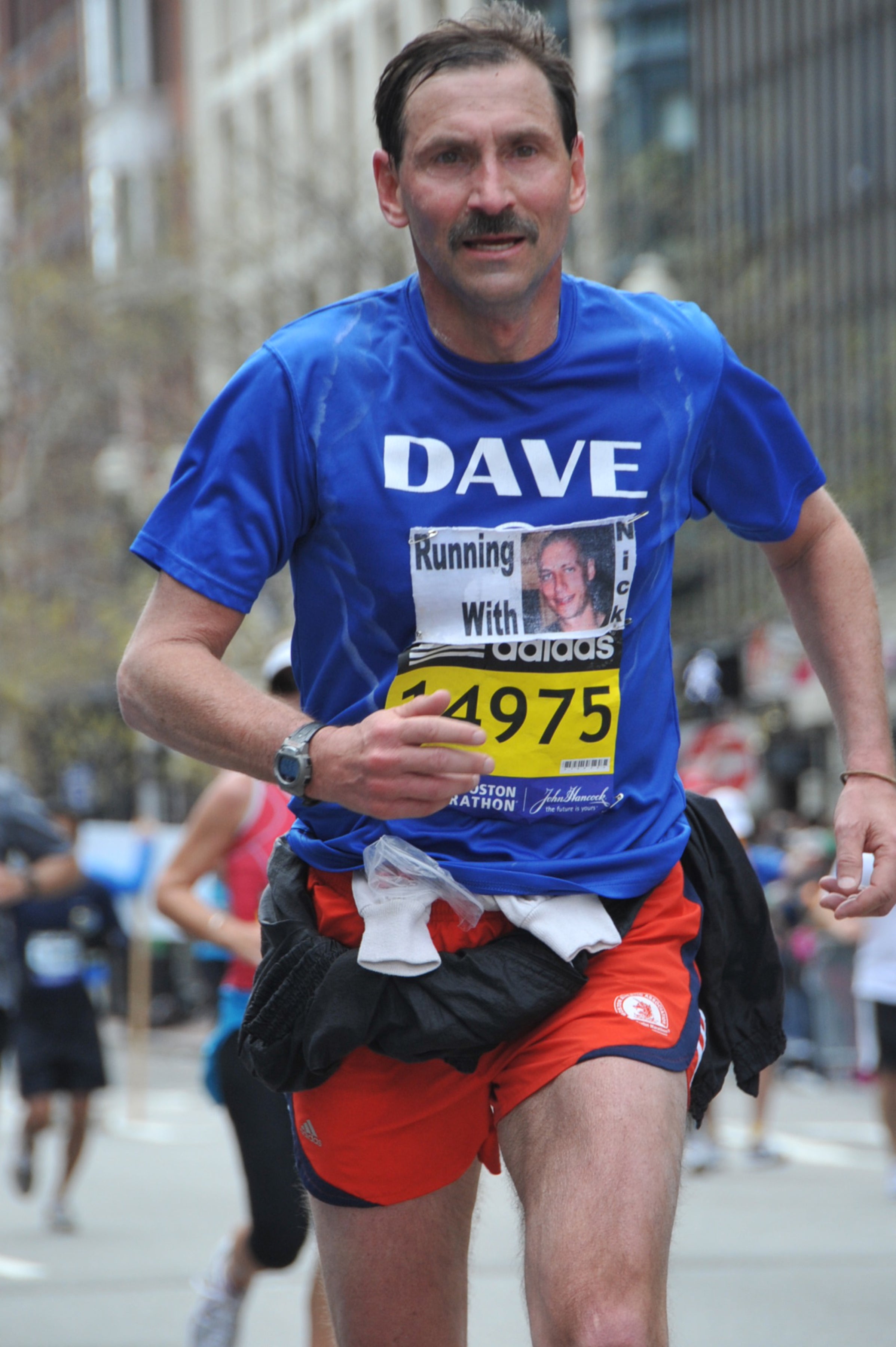 2017 is a comeback year for Dave Fowler. Last year, the 63-year-old was diagnosed with an aggressive form of leukemia six weeks before what would have been his 10th Boston Marathon. He was forced to drop out of the race to undergo treatment. But his goal was always to get back to running and his road to Boston.

This year, Fowler is back to finish his 10th race and raise money to benefit One Mission and his own nonprofit Help In The Nick Of Time, which he created in honor of his late son to help pediatric cancer patients and their families.

“When you have your life turned around, you suddenly realize what’s important to you, and you change your perspective on things,” Fowler told Boston.com. “For me, running this marathon in the past was all about qualifying again for next year, speed, and pacing and racing. Not this year. This year it’s about survival.”

Rahaf Khatib, known for her Instagram page “runlikeahijabi,” is taking on today’s political climate during this year’s Boston Marathon. The Michigan-based, Muslim mother of three was cast into the spotlight last year when she landed on the cover of Women’s Running after being photographed in Detroit wearing a black hijab and mint-green top while running. For her first Boston, Khatib is a member of Team 261 Fearless, and she’s raising money for the nonprofit Syrian American Rescue Network. So far, she’s raised almost $15,000.

Hockey’s former ‘Can’t-Miss Kid’ is making running a team sport this year. The 18-season NHL icon is teaming up with Denna Laing for his second Boston Marathon. Carpenter will push Laing, who was paralyzed while playing for the Boston Pride women’s pro hockey team during the 2016 Winter Classic at Gillette Stadium, in their official Team Hoyt Running Chair provided by marathon legend Dick Hoyt. The duo are running to benefit Journey Forward, a Canton rehabilitation facility that Laing credits for her ongoing recovery. 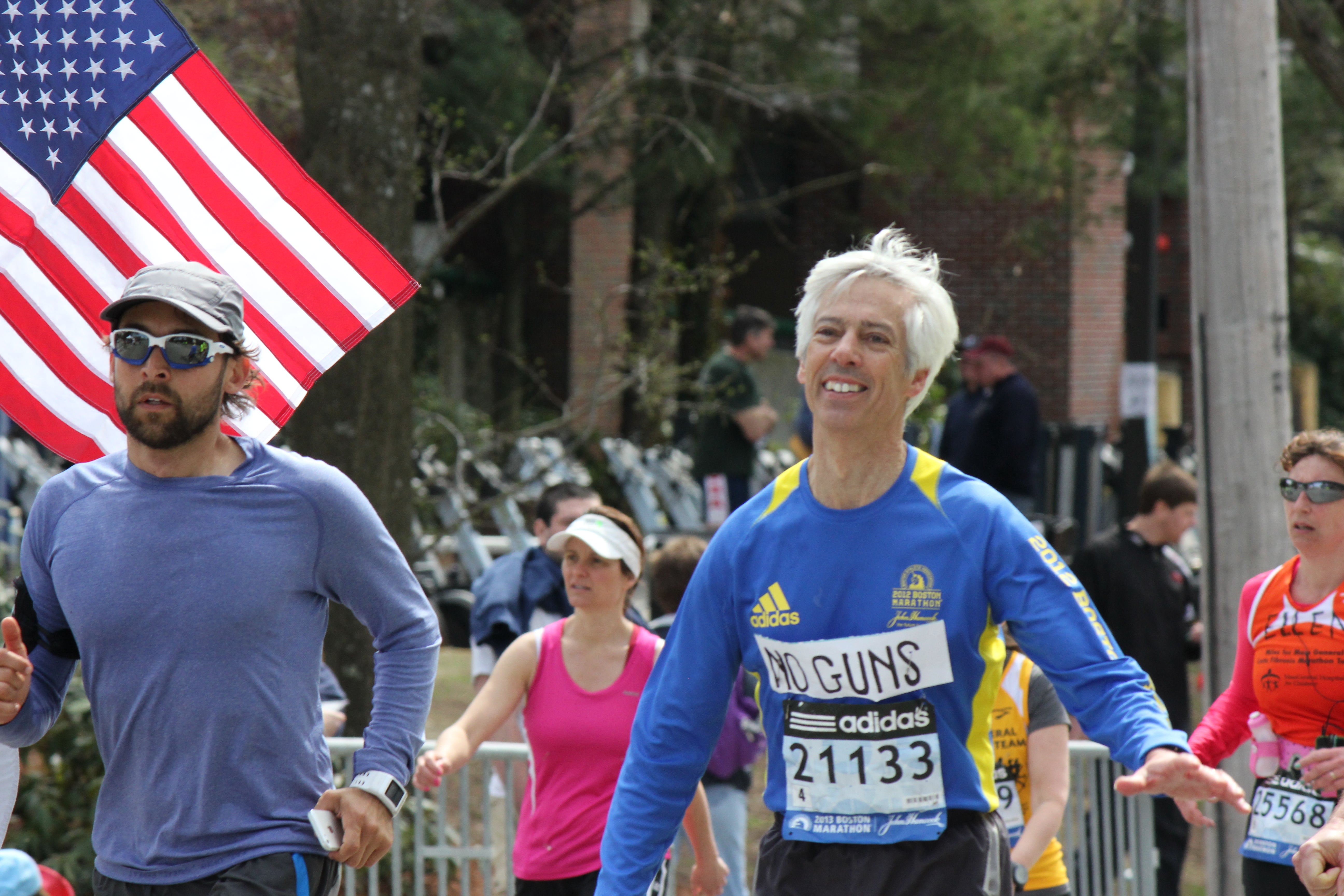 For some, running Boston once is a major milestone. Bennett Beach is about to hit that milestone 50 times over. The 67-year-old ran his first Boston at the age of 18. Since then, he’s never spent a Patriots’ Day away from the course.

“It’s sort of hard for me to picture waking up on Patriots’ Day and not being headed out to Hopkinton,” Beach said. “It’s just what I do.”

The last 15 years have been more challenging for Beach since being diagnosed with a neurological disorder, but keeping his streak has motivated him to continue. He said he has no plans of stopping anytime soon. 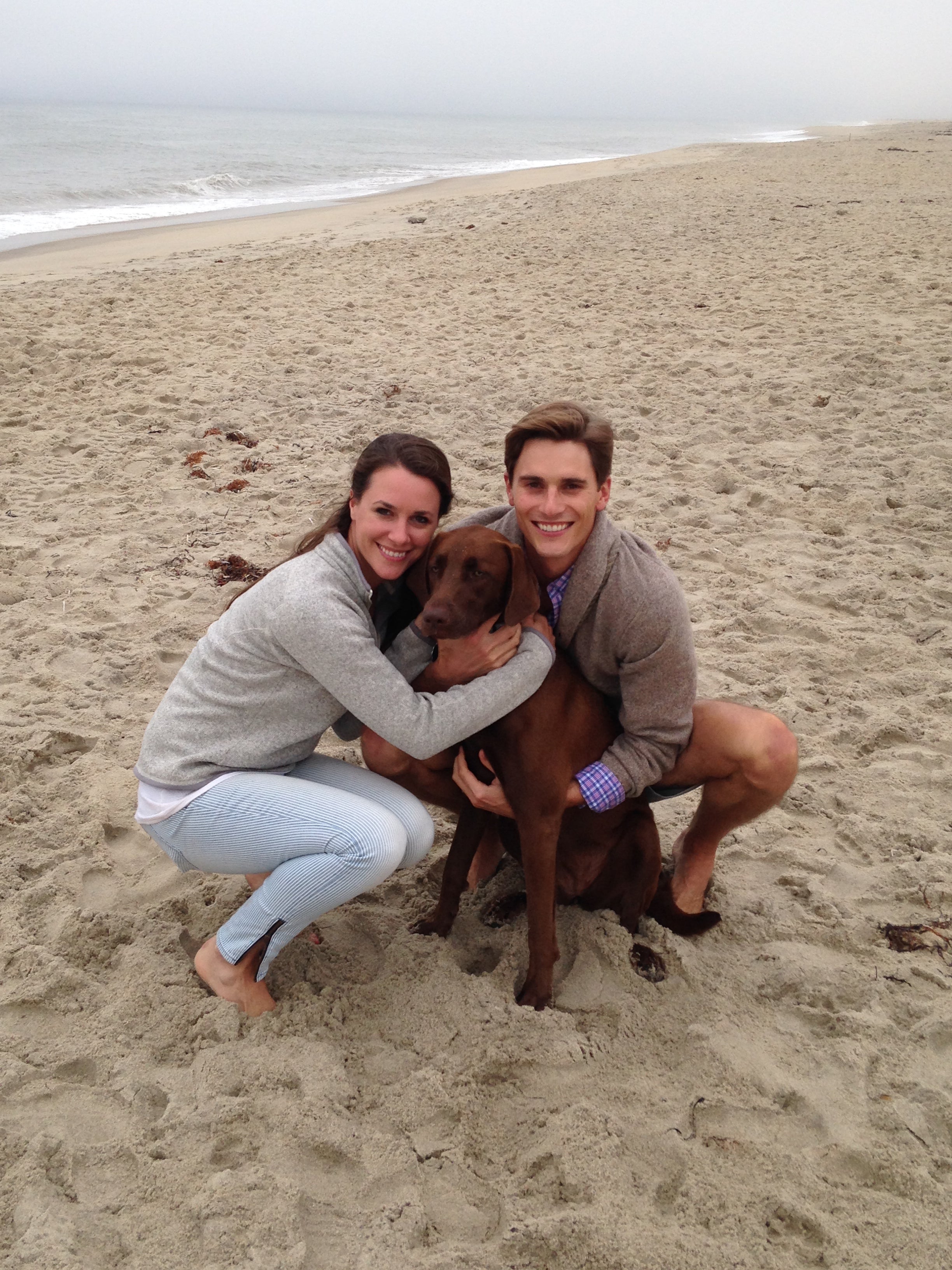 Almost nine months ago, Oliver Foley and his wife, Kinnon, were overjoyed with the news of their first child. But 11 weeks into the pregnancy, their unborn daughter was diagnosed with Down syndrome. This year, Foley is running his second Boston Marathon in honor and anticipation of his daughter, Tenley.

“My wife and I have come to view the diagnosis as something positive as opposed to something negative,” Foley said. “It will bring a lot of challenges over the course of our daughter’s life, but she will also become a reminder to us about what is important in life, and she is going to touch so many people.”

So far, Foley has raised almost $60,000 for the Massachusetts Down Syndrome Congress (MDSC). In addition to his unborn baby, Foley is running to honor his wife’s late uncle, Christopher Coleman McCall, who also had Down syndrome. In a twist of fate, Tenley is due on McCall’s birthday, May 3.

“I feel like when it’s all said and done, and I cross the finish line, it will be one of the best moments in my life for sure — until our daughter arrives,” he said.

Fifty years ago, Kathrine Switzer broke down barriers for women runners. During the 1967 Boston Marathon, “K.V. Switzer” became the first woman to formally enter and complete the race, despite race director Jock Semple’s attempt to forcefully stop her near the two-mile mark in what became an iconic moment. Switzer, 70, is now back to reclaim her bib number, 261, with 120 members of her nonprofit 261 Fearless, which works to empower women around the world through running.

Losing a sibling to cancer is heartbreaking. Jennie Sheridan knows; she lived through it three times. From 2008 to 2011, Sheridan’s three siblings — Molly, John and Mary — all lost their own battles with cancer while they were in their 30s. To honor their memories, Sheridan began running as a Dana Farber team member in 2009. Sheridan has raised more than $300,000 through eight marathons for the hospital’s cancer research.

“It’s a big reason why I keep going,” Sheridan said. “They had been through so much to raise awareness and raise funds so it allows me to keep doing that for them and also recognize their strength and their fortitude.”

This year’s marathon will be tied to Kenya by more than its favored podium finishers. Graham Masiiwa, of Wellesley, is one of four runners raising money for “Flying Kites,” a Boston-based charity and school in Ruran, Kenya. For Masiiwa, an admissions counselor and coach at the private Dana Hall School, the mission is personal.

“Being a kid growing up in Zimbabwe and being sent home for not having tuition for school, and now being able to provide that for another kid … it’s come full circle,” he told CBS Boston.

Funds raised from this year’s race are expected to be used to open a teacher-training center and raise the level of education for children in Kenya.

A 17-time Paralympic medalist, Tatyana McFadden has won every Boston Marathon she’s entered, sweeping victories from 2013 through 2016. This year, she’s looking to add another feat to her lengthy list of accomplishments: to become only the third woman in Boston Marathon history to win five straight Boston titles. 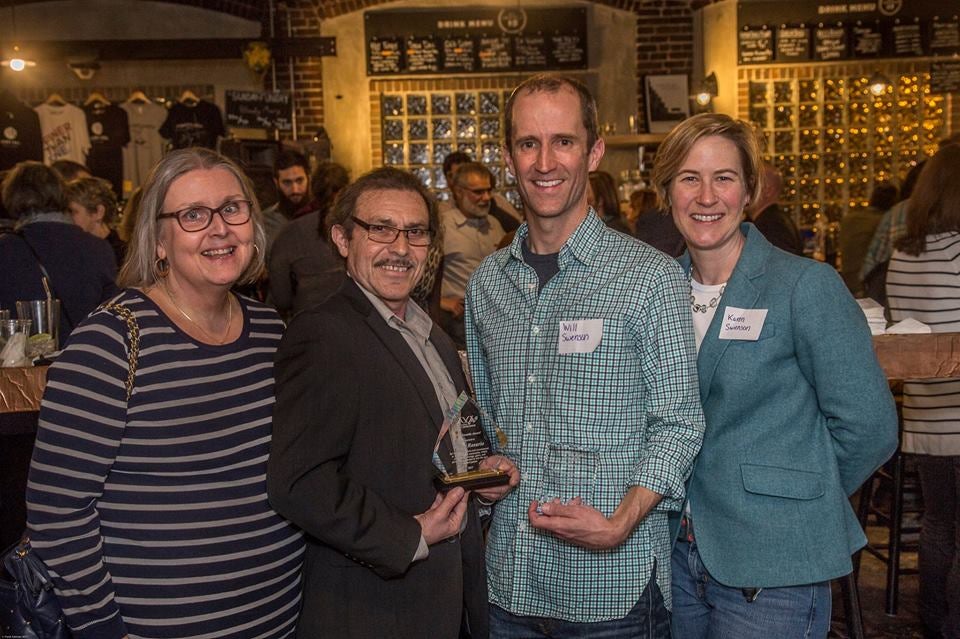 While the finish line will be the end of a journey for thousands of runners on Monday, for Will Swenson, it’s the beginning of a six-month endurance series. Swenson is participating in five events ranging from 26.2 to 100 miles to raise awareness and money for the New England Innocence Project’s Running for Innocence campaign, which works to support and represent people wrongly convicted of crimes.

Swenson became passionate about the criminal justice system after befriending Victor Rosario, a Lowell man who became a marathon runner during his 32 years in prison for a crime he says he didn’t commit. Last year, Rosario completed his first marathon outside prison walls with Swenson, his coach, by his side. Though Swenson won’t be accompanied by Rosario this year, his friend’s story will be with him through every mile.

“If you hear his story, it’s so powerful,” he said. “And it puts in real terms that his is a case of someone who was really able to find freedom based on the hard work of the New England Innocence Project, and there are so many others like him that need our help.” 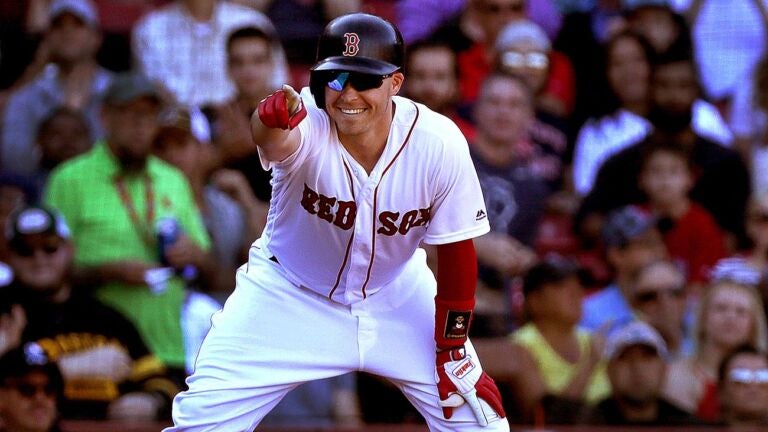