Erich Manser has run marathons before — 16, in fact — but never like this.

Manser, a 44-year-old Littleton resident, suffers from a degenerative eye disease called retinitis pigmentosa, which has gradually chipped away at his eyesight since he was diagnosed at the age of 5.

“What I have left is what I describe as if you’re looking through a drinking straw that you cover with wax paper,” he told Boston.com in a recent interview.

But that hasn’t gotten in the way of a long and accomplished para-athletic career, which has included swimming records and an Ironman world record in the Physically Challenged Division. For the first time this year, Manser, who is running with Team With A Vision, will run the marathon with a new technology, in addition to his sighted guide.

Aira, a service powered by AT&T, utilizes smartglass technology to stream what Manser sees to a remote assistant, who he can speak with in real time for help navigating the course. So while Manser is trekking the 26.2 miles from Hopkinton to Copley Square, a remote assistant named Jessica will help guide him step-by-step all the way from San Diego.

Manser described his experience competing with his condition and, more recently, Aira and Jessica in an interview, which has been edited and condensed.

What was it like growing up with retinitis pigmentosa?

Erich Manser: The two main symptoms of RP are night blindness and limited peripheral vision, and because it’s degenerative it does gradually over time get worse and worse, and eventually leads to total blindness.

I’m happy to say at 44 years of age, I still have some vision remaining. When I was diagnosed at age 5, I really had a good amount of useful vision. It was really the night blindness at that age that was most noticeable. Through grade school and high school and college, the night blindness was the biggest challenge with going to movies with friends or school dances. Eventually when I got my driver’s license at age 16, it said right on my license “daylight only.” Driving at night was not an option.

In more recent years, and certainly as I got out of college and on through my 20s and 30s, the peripheral vision really noticeably started to close in more and more.

I got really a small circle of vision straight ahead that I’m looking through and even with that the details are sort of dulled out and hazy. It just makes you really adaptable. You get used to seeing a certain way and then it changes a little bit on you. But I’m very grateful for how long I was able to see. It’s been a journey.

How did RP affect your athletic career?

EM: Swimming was my sport growing up. I even did that all through college. This is at a time when I didn’t even see myself as someone with a disability; it was more like the night blindness “nuisance.” It wasn’t even a huge factor at that time.

Then I got out of college and I kept up a lot of the same dietary habits [laughs] and didn’t have the exercise level to offset that. Before long, I started to put on a good amount of weight. And one day I even struggled to tie my shoe because my big gut was in the way. I was kicking myself and saying, “This is crazy. I used to be an athlete.”

It was easier actually to take up running then it was to try and get to a pool, because I wasn’t in school anymore. I could just go out the door and run a mile or two. I started doing that for weight loss and started to notice that my vision had changed since I was competing and working out regularly.

For me to actually be able to run — and do it safely and reliably — I had to make some adjustments.

During a race, I would find myself just finding someone who was going a similar pace to what I wanted to run and I would just get right behind them. So they were guiding me without realizing they were guiding me. You just run close enough to them so that no one else is tempted to cut across your path. My earliest races were all shorter distance like 5K, 10K.

In 2006, I ran my first marathon down in Cape Cod and it kind of took off from there. Being someone who was significantly visually impaired enough to need to run behind people and use caution, I started to meet others around the country and started to realize there are a number of people all over the place that are similarly challenged that are doing the same sort of thing. 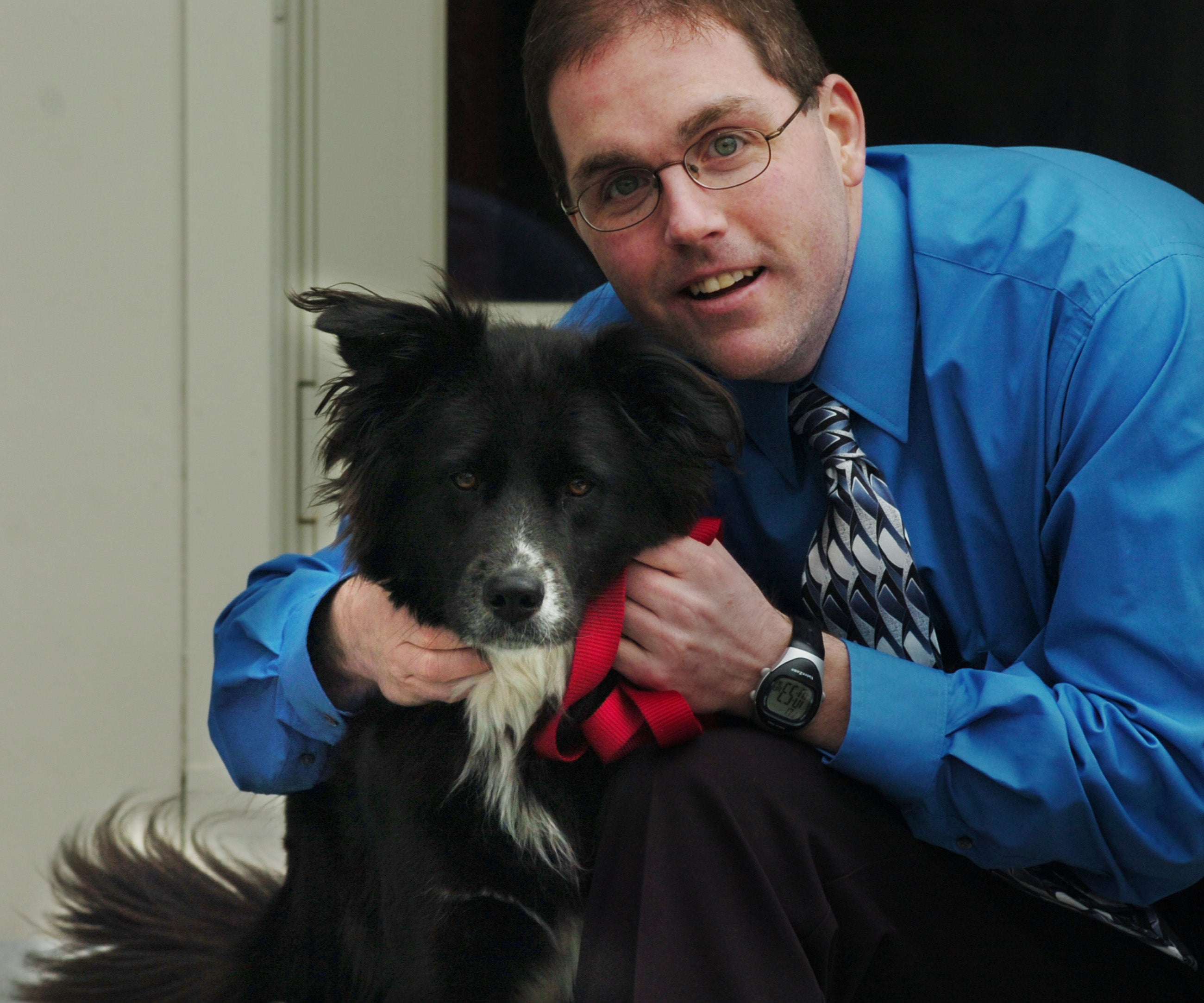 Erich Manser pictured with his dog Charley in 2007.

Are there any particular challenges running the Boston Marathon?

EM: The thing about Boston that’s unique is that it’s such a historic and well-supported race. I mean, each of the communities that the course runs through, they really go all out. You have spectators and people cheering you on all along the route — from start to finish.

By that same token, there’s also 30,000-plus runners. You can rely on having company the entire way. In a smaller race, often times when the gun goes off, that initial congestion kind of breaks open and a mile or two in you have plenty of space between you and the other runners. That’s not necessarily the case in Boston. The gun goes off and you’ve got people all around you all the way into town.

Add to that, that they have aid stations like every mile. They have a water stop at each mile on both sides of the street. My normal strategy in a race is to hold the periphery. I’ll get way to the outside edges of the road, just to avoid the congestion, where people kind of cluster.

But that doesn’t work in Boston. In Boston, my tendency is to hold the center yellow line and then each mile where people are crisscrossing, trying to get to those water stops, you just hold the middle.

How will Jessica help during Monday’s race?

EM: The challenge with the Aira technology will certainly be those conditions where everyone is packed in.

The training runs that I’ve done have mostly been out where I live on quiet, country roads where there’s not a whole lot going on. The training runs have been largely conversational. In Boston, it’s really going to need to be short. We talked about having one or two-word statements, like “Move left” or “Stay straight.”

To be honest, as everyone at Aira is fully aware, this isn’t the use that this technology was developed for. It’s really going to be a stretch test. But I’m excited to come back and say, “This did or didn’t work.”

Jessica will be giving me real quick-hit reference visuals. If I’m in the middle and holding that yellow line, I’ve got a huge blind spot, if I’m looking straight ahead, at like 1 o’clock. Generally when I have David, my sighted guide, I have him running on my left and we’re each holding the end of a tether. Often times what can happen can be in my blind spot, there can be people who are inching their way across my path and they basically have to be directly in front of my before I even notice.

For Jessica to be there to say, “OK, you have a gentleman here on your right who’s inching his way in,” that will allow me to call out in some way to alert him that he’s kinda wandering into my lane.

Additionally, often times when you run through aid stations, everyone discards their cups right in the middle of the road. Often there are clusters or piles of cup. Jessica will be able to pick up on that and say, “Pick up your feet.”

Are there any goals you hope to accomplish?

EM: Boston is such a unique race that I try to keep an open mind every time I come to run Boston. This year will be no different. It certainly is going to be a different experience of Boston than I’ve had, running with a technology test going on. I’m not racing for sure. Safety will be our first concern.

Not to throw in a plug, but I work at IBM and so does David. I work in accessibility research, which is the area in technology where you’re making sure any technology that’s being developed can be used by everyone.

There’s really a nice alignment here. Being someone who’s gradually losing their vision, I’ve got a personal firsthand interest in this. But because of what I do for a living, I’m also paying attention to new and emerging technologies that help make the world more accessible for people. It’s thrilling for what I do at IBM to be doing this sort of testing for an exciting new technology that represents a lot of new possibilities for people who are blind and visually impaired.