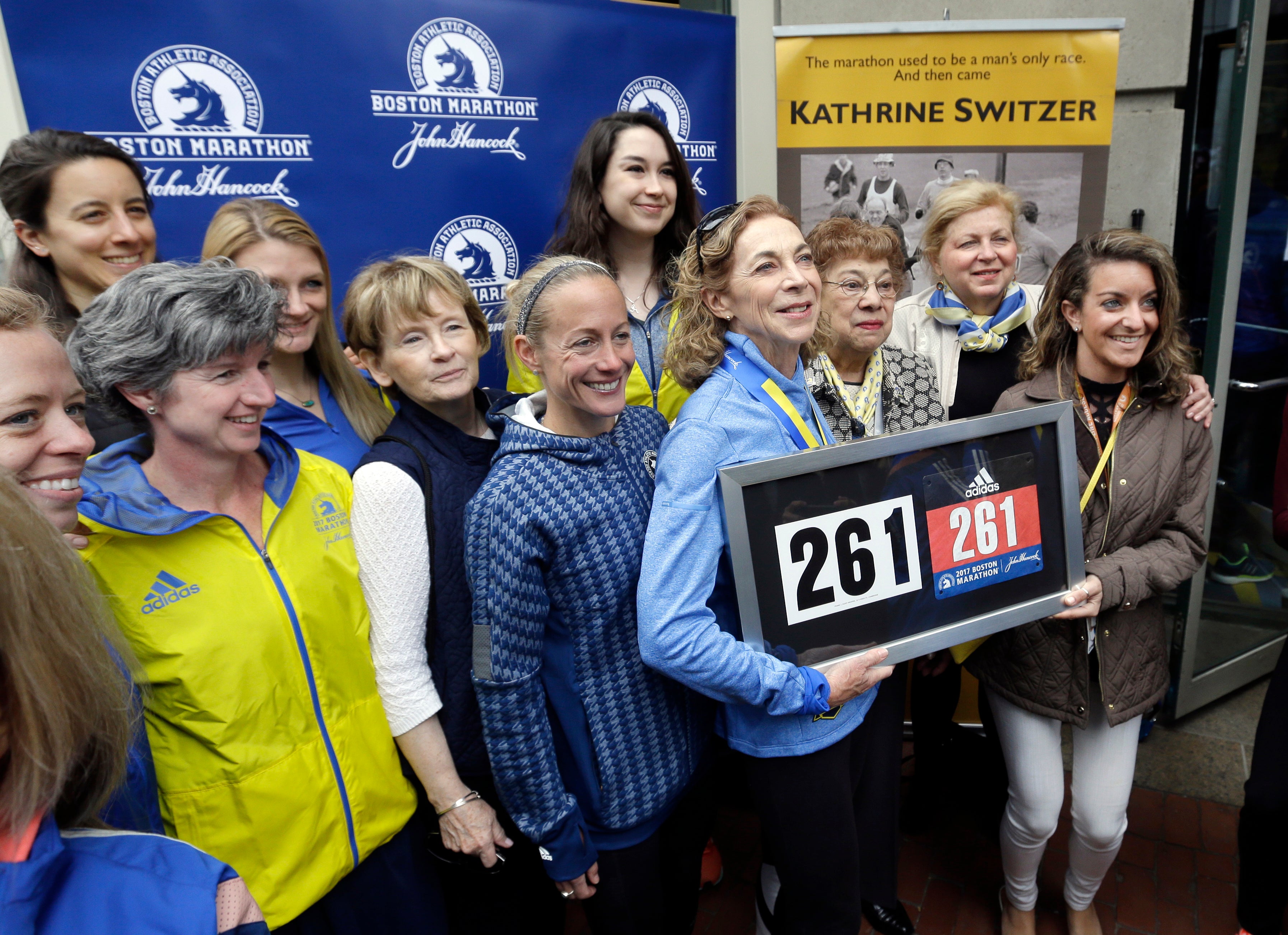 Kathrine Switzer, front middle, the first official female entrant in the Boston Marathon 50 years ago, poses with runners from her 261 Fearless foundation and Boston Athletic Association officials at a news conference Tuesday where her bib No. 261 was retired by the BAA.

BOSTON (AP) — A line stretched the length of the block outside the Boston Marathon store on Boylston Street as runners waited to embroider their finishing times onto the jackets they bought to celebrate their achievement.

Inside, another line of runners was there on Tuesday to celebrate Kathrine Switzer.

A day after she returned to the course on the 50th anniversary of her 1967 landmark run, the first official female entrant saw her bib No. 261 retired by the Boston Athletic Association. It’s the first number to be retired, though B.A.A. spokesman Jack Fleming said No. 61 has been held out of circulation in honor of Johnny Kelley, who started the race a record 61 times (and finished 58).

“People have such an appreciation for what running has done for them and how it’s changed their lives,” said Switzer, who named her 261 Fearless foundation after the bib number that was nearly torn from her back on the marathon course.

“It’s beyond me; it’s the number now,” said Switzer, who ran the race on Monday along with 118 women and “seven intrepid men” who raised money for the charity that uses running to improve women’s lives around the world. “We can make it happen through running. The number now stands for all of those things.”

Switzer was a 20-year-old student at Syracuse when she entered the men-only Boston Marathon in 1967, using her initials on the registration form. Although Bobbi Gibb was also in the race for the second straight year, one of the unofficial runners known as bandits, race director Jock Semple fumed at the sight of Switzer in an official bib and tried to pull her off the course.

Pictures of that splashed across newspaper front pages, and Switzer somewhat inadvertently became a symbol of the women’s movement. 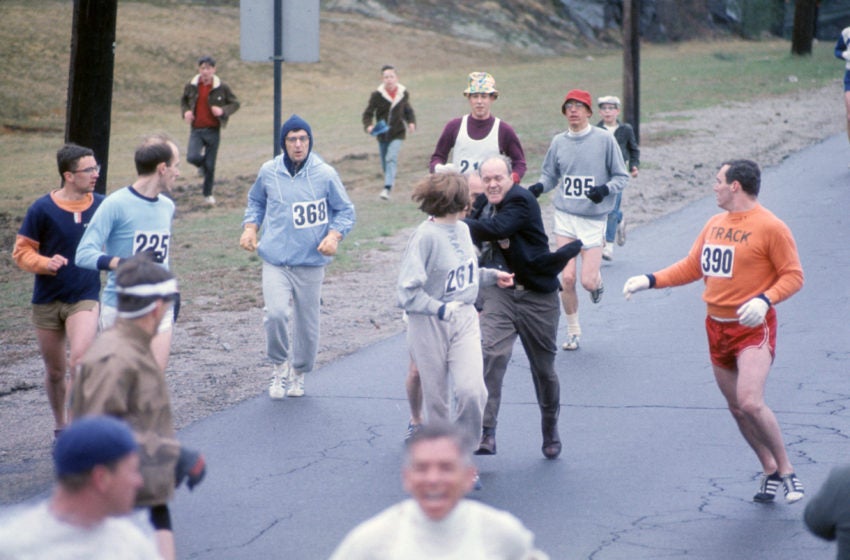 Switzer began organizing women’s road races that helped persuade the Olympics to add a women’s marathon in 1984. In 2011, she was inducted into the National Women’s Hall of Fame in Seneca Falls, New York, where they quote Laurel Thatcher Ulrich: “Well-behaved women seldom make history.”

“It was a very good thing she wasn’t well-behaved on that morning,” said Joann Flaminio, the first female president in the 125-year history of the B.A.A.

Switzer won the New York Marathon in 1974 and continued to run Boston until 1976 before providing TV commentary for the next 37 years. But this year, at the age of 70, she ran it again, finishing in 4 hours, 44 minutes, 31 seconds — only about 25 minutes slower than when she was 20.

“Fifty years before, it was so freezing,” she said. “This time it was wall-to-wall cheering, and people not just congratulating me, but thanking me. It was extremely validating. It was a joyous experience. I was not only pushed by that tailwind, but also buoyed by the crowd.”

Geoffrey Kirui won the 121st edition of the men’s race on Monday, and Edna Kiplagat won the women’s division to complete the first Kenyan sweep in five years. The Americans had their best results since the race went pro in 1986, placing two women in the top four and six men in the top 10, including runner-up Galen Rupp.

In all, 26,411 people finished the race on Monday — 97 percent of those who started — including 11,973 women. There were a total of 2,596 medical “encounters” on the hotter-than-ideal day; 168 of them were transported to hospitals; 15 to 18 stayed overnight and all are doing fine, according to medical director Chris Troyanos.

“I’m not sure how it can get any better than how everything went yesterday,” race director Dave McGillivray said Tuesday at the annual day-after briefing. “I’m my own worst critic, but my critique document is still blank.”

Jimmy Golen has covered the Boston Marathon for The Associated Press since 1995. Follow him on Twitter at http://www.twitter.com/jgolen .

Following texting controversy, the Boston School Committee has no Latina members. Now what?