This year, shoemakers took inspiration from the most quintessential aspects of the city — from the harbor to Dunkin’ Donuts — when designing sneakers in honor of the Boston Marathon.

The special edition kicks below come from five brands, including local companies New Balance and Saucony. And they can be purchased online by all, whether you’re heading to Hopkinton on Marathon Monday or you’re just getting started with running.

It would be hard to find Boston Marathon shoes that more loudly screamed, “Boston.” With the city’s name boldly sketched on the outer sides of these cerulean shoes and the Massachusetts State House on the tongues, your feet will be hard to miss in these puppies. ($160, available at asics.com)

These special edition shoes from Waltham-based Saucony are literally sprinkled with Dunkin’ Donuts flair, from orange and magenta doughnuts on the heels to coffee-covered sockliners. The kicker (literally): Reflective stripes that read, “America Runs on Dunkin.’” ($110, available at saucony.com)

Alongside its line of Boston Marathon gear, Adidas has released running shoes in the Boston Marathon’s signature blue and yellow, with the Boston Athletic Association’s unicorn symbol on the heels. ($120, available at marathonsports.com)

The devil — or, rather, the city — is in the details for Brighton-based New Balance’s Boston footwear. The words “run” and “Boston” come on these shoes’ lace aglets, the sockliners are printed with a map of the city, the tongue shows off the city’s name, and the design on the back of the heel alludes to the Charles River. ($129.99, available at newbalance.com)

Similar to the 890v6s, these Fresh Foam shoes feature special Boston decorations on the aglets, sockliners, and tongues. ($109.99, available at newbalance.com) 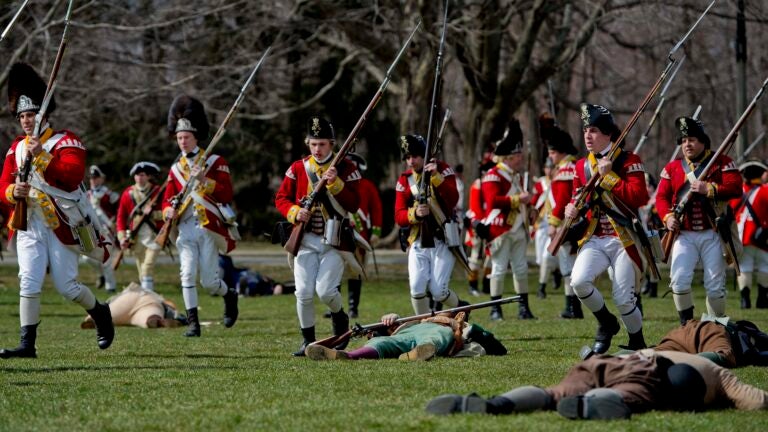