Well before the elite Boston Marathon runners soar past Wellesley College, nearly halfway through the 26.2-mile race, Wellesley students begin to make their way toward the main entrance, to Route 135. The suburban campus is quiet in the early morning of Patriots Day, but that won’t last long.

Soon, the pace trucks pass by, and students frantically make final tweaks to their signs that read, “Kiss Me, I’m an International Student”; “Kiss Me, It’s My First Marathon”; “Kiss Me, I’m an Econ Major.” Whoever has the wittiest signage will get the most kisses from strangers along the marathon route, and on Marathon Monday, that is the goal.

Cheers start from the west. 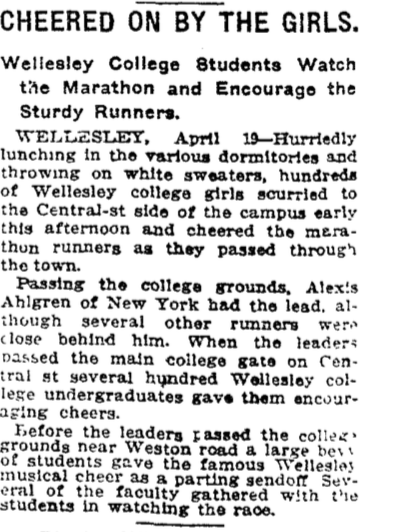 The wheelchair racers swoosh by and the day of screaming commences. It will continue until the last of the tens of thousands of runners trickles past.

Stories of Wellesley students watching and yelling for Boston Marathon runners date back to the race’s inception, the students’ energy and enthusiasm only growing throughout the last 121 years.

According to Wellesley College’s website, students reportedly rooted on a Harvard University student they all liked during the very first marathon, in 1897.

By April 20, 1911, only 15 years later, “hundreds of Wellesley college girls” were “hurriedly lunching in the various dormitories and throwing on white sweaters” before they “cheered the marathon runners as they passed through the town,” according to the Boston Daily Globe.

Students appear a bit more subdued in the photo below, from a 1932 newspaper clipping. It shows students in long coats and was published with the caption, “A group of Wellesley College girls are shown along the roadside outside the college as they watched the Marathon. De Bruyn, the eventual winner of the classic, was running back in fifth place when this picture was snapped.” 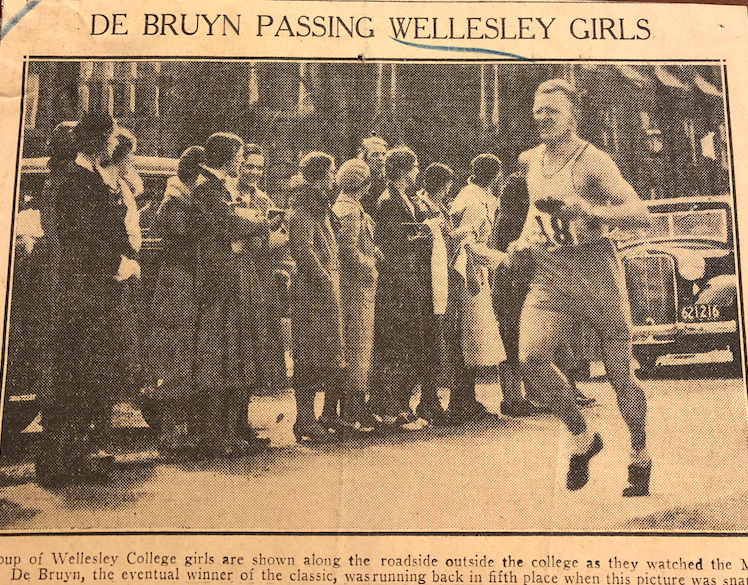 A newspaper clipping from 1932.

Not everyone participated in the roadside viewing. For her part, Susan Dana, class of 1958, said she “knew nothing about” the Boston Marathon during her time as a Wellesley student.

“Probably if [my roommates and I] had known about it, we would have thought it was just a bunch of silly men galavanting,” Dana said.

The first woman to run Boston was Bobbi Gibb, in 1966. According to a 1996 Runner’s World article about Wellesley’s traditions, news had spread around campus at the time that a woman was participating.

“We stood there so expectantly, scanning face after face,” Diana Chapman Walsh, class of 1966 and Wellesley’s eventual president, told Runner’s World. “We let out such a roar for her.”

Then, in 1971, women officially were permitted to register for the next year’s Boston Marathon.  According to the Wellesley College website, the campus cheering tradition got more popular then. 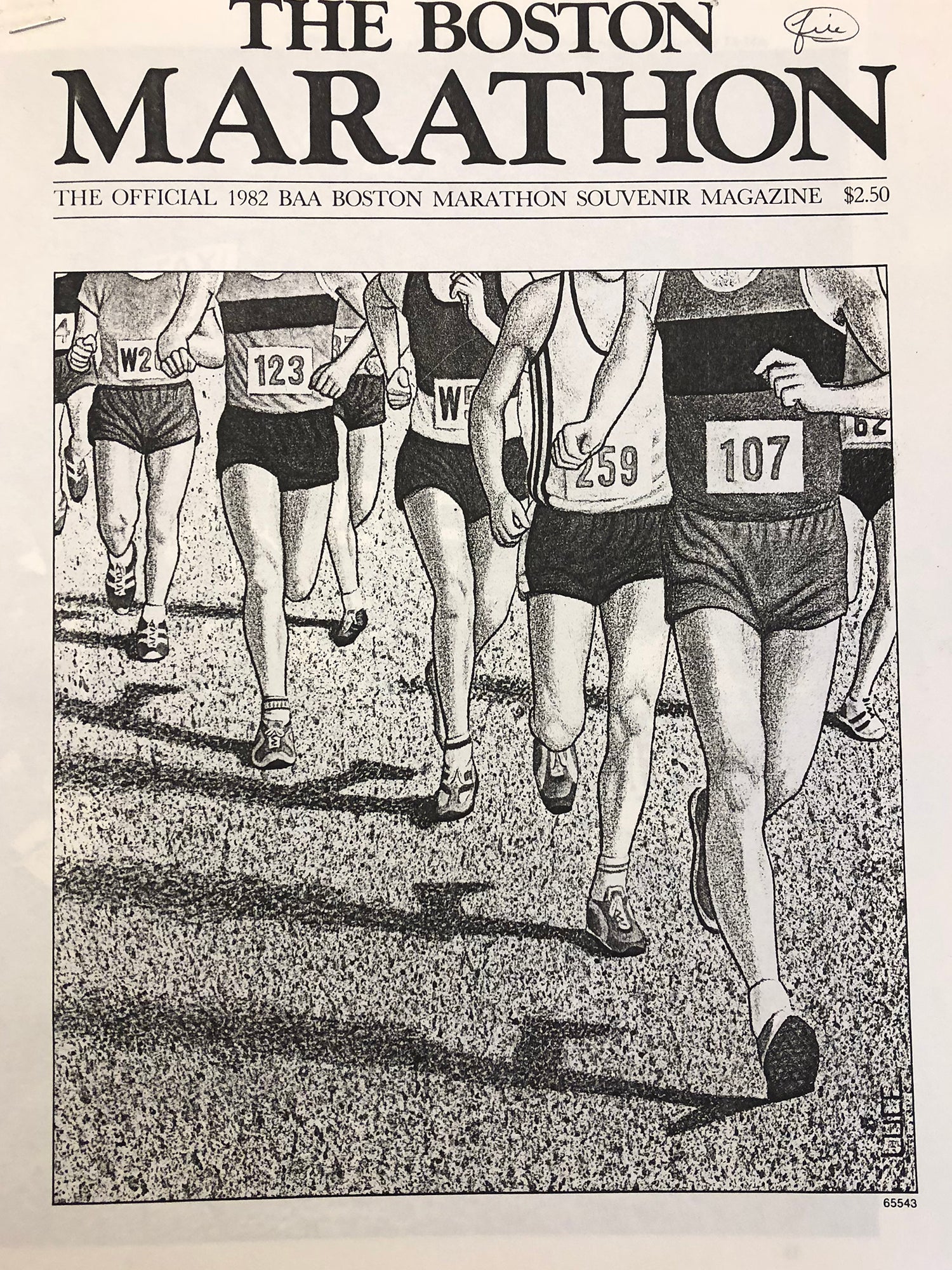 An article in the Official 1982 BAA Boston Marathon Souvenir Magazine, written by a Wellesley alum, talked about the boost runners got from hearing the Wellesley screams.

“Once the lead runners pass, the women look for the handful of Wellesley girls and professors who scatter in the back of the pack,” Katy Williams wrote. “By then there is not much crowd control, and the tunnel of Wellesley women narrows to six or eight feet.”

It’s worth noting: In present-day Wellesley, students are blocked off to one side of the street.

In present-day Wellesley, there’s also a lot more kissing involved. It is unclear exactly when the tradition of runners giving students kisses on the cheeks and even lips began, but in a Boston Globe article from 1993, there’s a mention of runners blowing kisses to the students.

“But as the women of Wellesley College provided vocal support for [female runners] Markova, Yegorova and others, they also greeted the male runners enthusiastically,” Peter May wrote. “And the men connected with the crowd. Many exchanged high fives with the students. Some blew kisses, while others gave a fist salute. These were the second-echelon runners; the leaders had long since passed, and these men had no illusions about winning.” 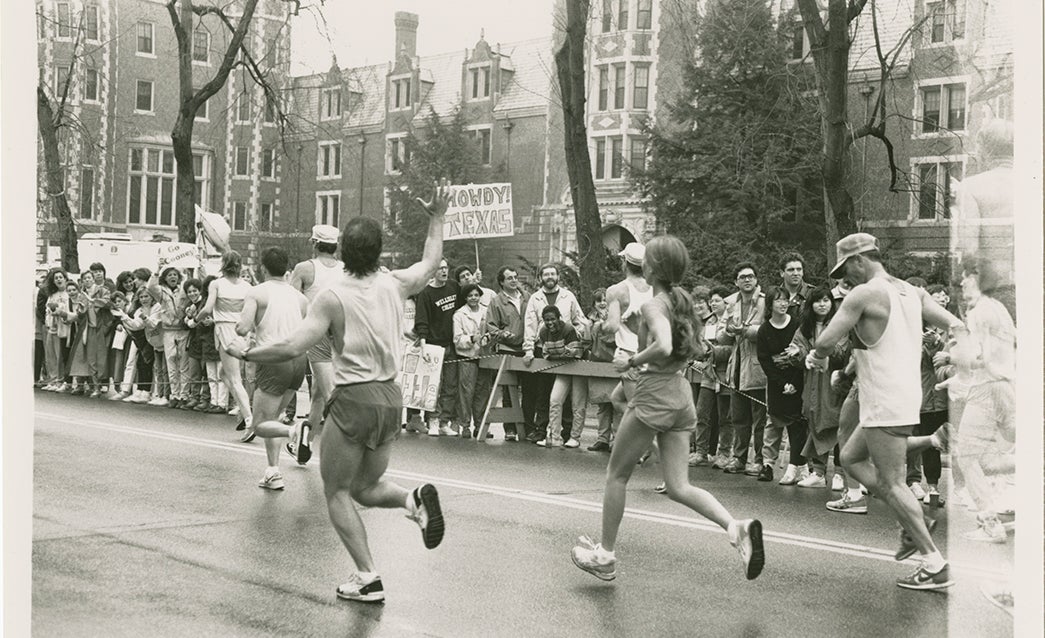 Many students craft their own posters, though Munger Hall, one of the Wellesley dorms that faces the street, has historically been tasked with making signs to encourage the runners. In 2011, the dorm formalized this process by creating Twitter and Facebook accounts to take custom requests for favorite runners.

A 1993 Wellesley News article reported that one runner named John Archer was so fond of the Munger Hall signs and the students’ screams that he sent a beer keg to the dorm every year he ran in the 1970s. After Wellesley enacted a stricter alcohol policy, he sent a check for $100 annually. Archer ran Boston a total of 21 times. 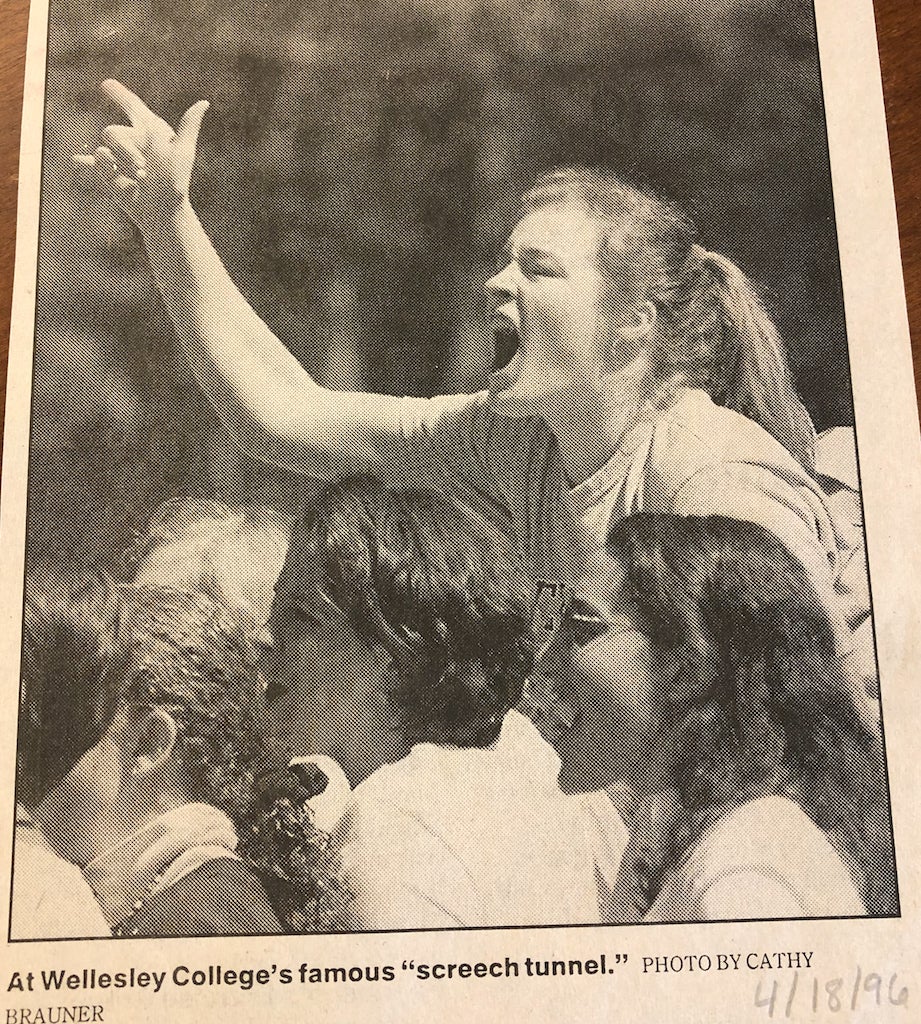 A clipping from an unknown newspaper.

According to the Wellesley College Archives, the first published mention of a name for the Wellesley cheers came in 1996, in an unidentified publication. The spot between Hopkinton and the Back Bay was dubbed the “Screech Tunnel” in a photo caption.

In 2000, The Wellesley News published its current terminology, “Scream Tunnel,” in an article about the joy of working at the prerace pasta dinner the night before the marathon. When the author asked marathoners at the dinner what they thought about Wellesley, one runner said, “In Wellesley — at the Scream Tunnel — oh yeah!”

It wasn’t until 2002, just 16 years ago, that The Boston Globe first referenced the poster- and kissing-filled section of the race route as the “Scream Tunnel,” according to the Wellesley College Archives.

“The students at Wellesley College who thronged two and three deep at the barriers along Route 135 last Monday kept up the tradition of the ‘Wellesley Scream Tunnel’ with their vocal support, posters, and handouts of oranges and water for the Boston Marathon runners,” Marvin Pave wrote. 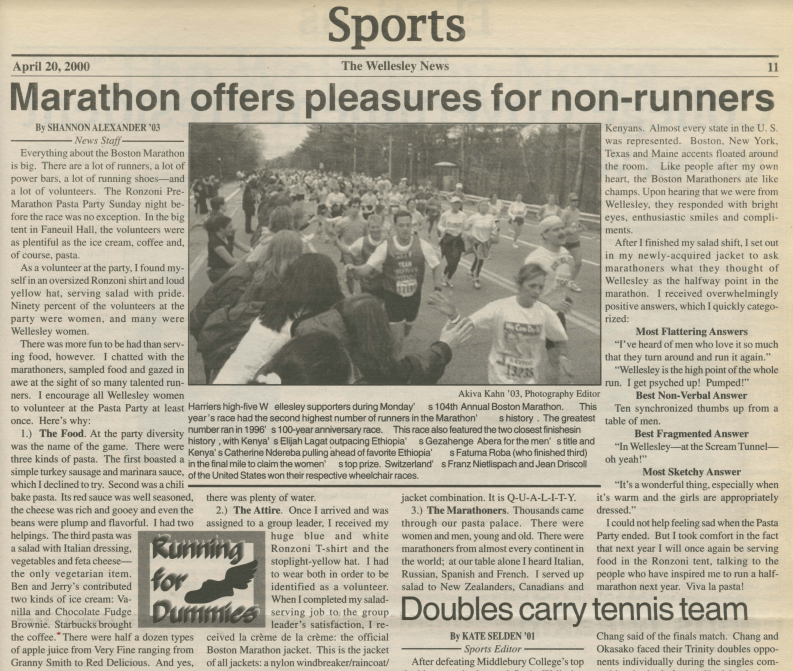 Dana, the Wellesley class of 1958 student, didn’t return to her alma mater to watch the marathon until half a century later, in 2008, when her daughter and granddaughter, who was a student at Harvard at the time, were running it.

Dana and her husband stayed at the Wellesley College Club, a small hotel on campus. That Monday morning, the couple walked across the college grounds to Route 135 so they could watch the race. When Dana began to hear the infamous cheers from the “Scream Tunnel,” she didn’t find the smooches and “Kiss Me, I’m a…” posters as enjoyable as many of the runners do. 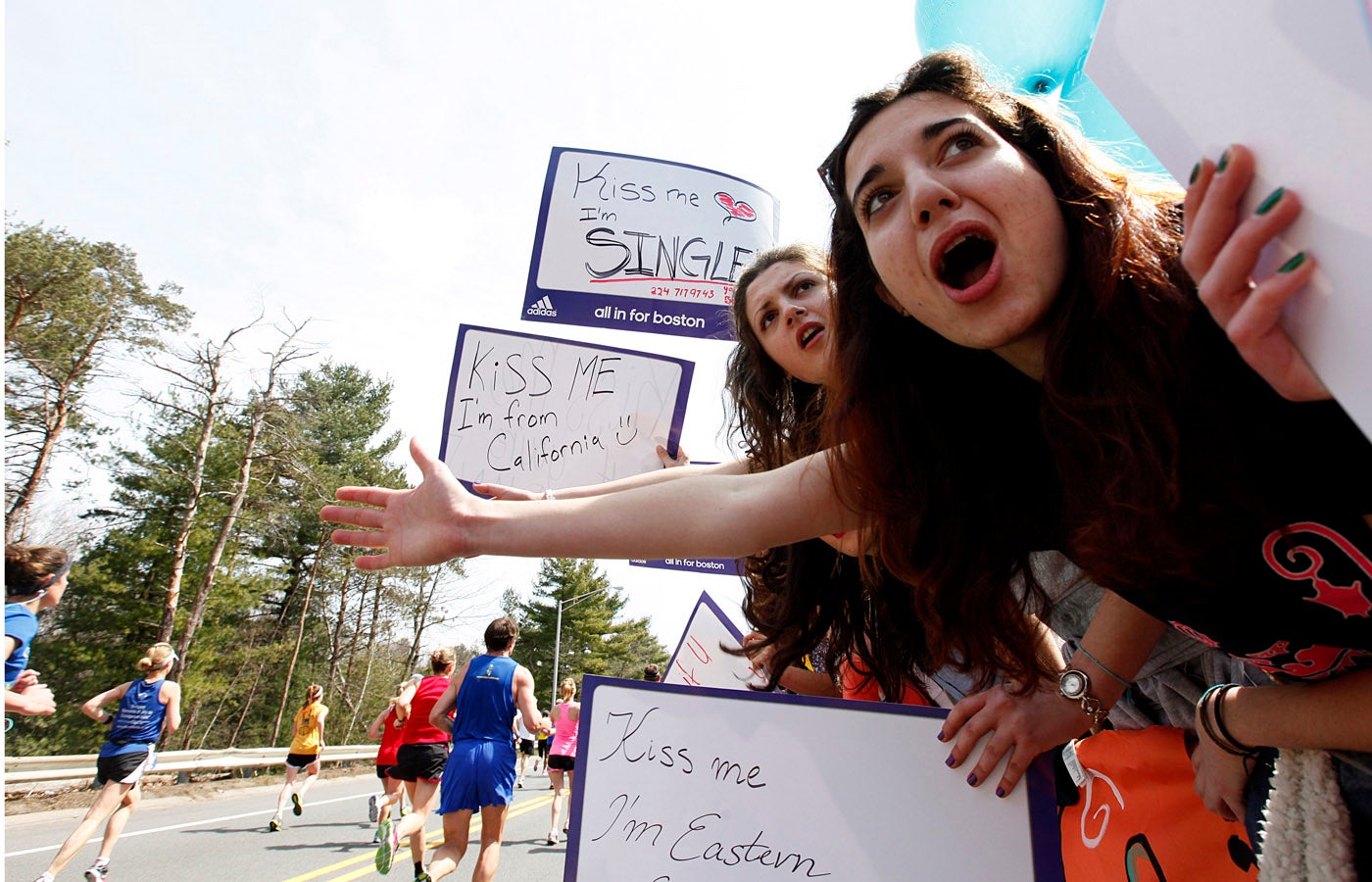 Iglika Atanassova, front right, and Simona Boyadzhiyska, behind her, cheer on runners and hold signs soliciting kisses in 2013.

“I was appalled,” Dana said. “Here are the brightest young women in the world, and they are making fools of themselves. I grew up in the ’50s and we were all pretty uptight.”

Dana and her husband walked down the street, away from the student-heavy section.

A few years later, Dana’s daughter was running Boston again. It was a burning hot day and Dana wanted to stand in the shade, which unfortunately for her meant she had to be right in the thick of the “Scream Tunnel” to try to get a glimpse of her daughter. 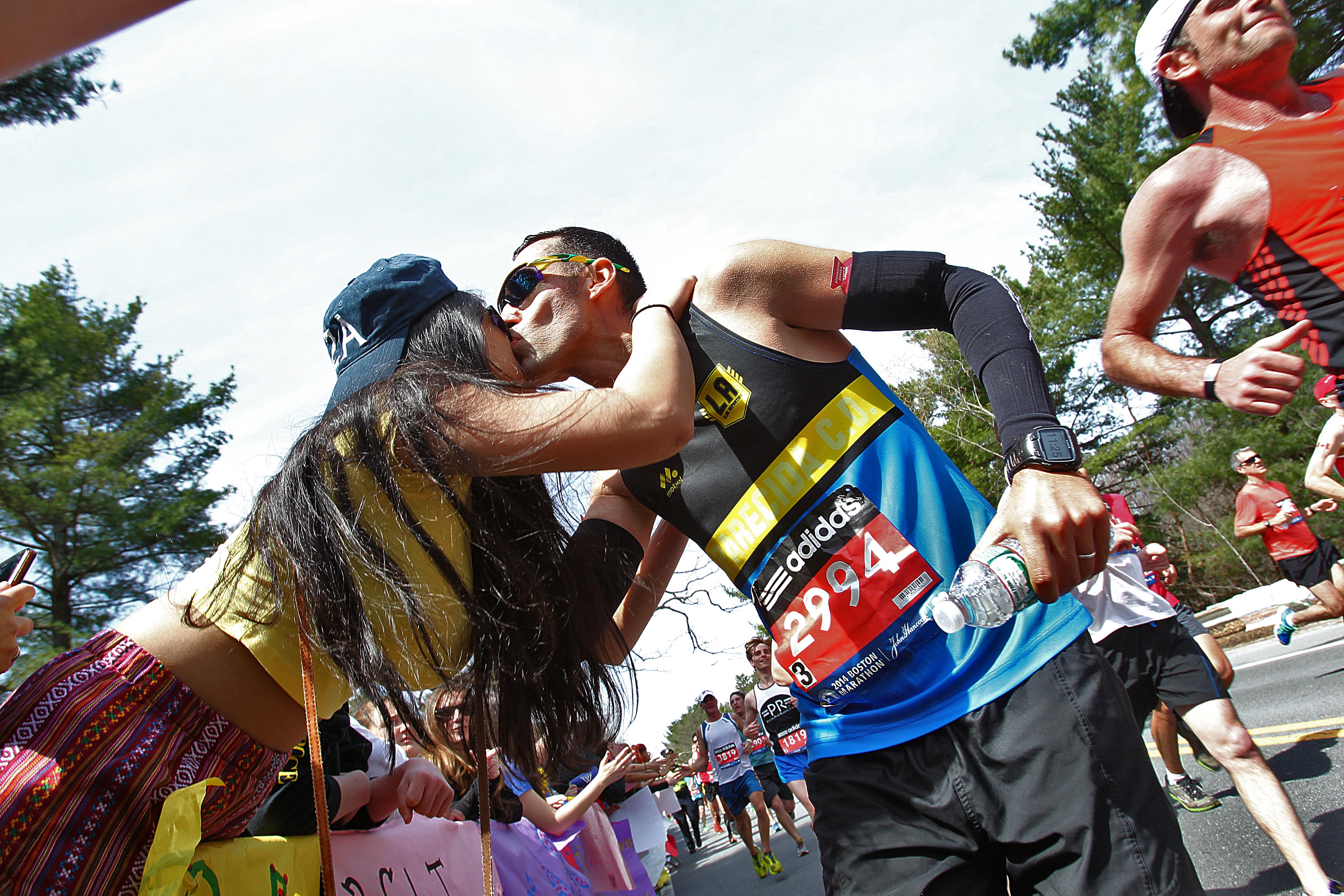 Wellesley College student Ambika Patpatia gets a kiss from a runner in the ‘Scream Tunnel’ in 2014.

“We were standing there finally getting into the swing of things,” she said. “And all of a sudden, out of nowhere, this gorgeous young man comes up and kisses me, with my white hair, looking elderly. I began to think, maybe this is pretty good after all.”

Dana’s daughter is once again running Boston in 2018. So, will Dana hold up a sign when she goes to watch her daughter this year?

“My husband thinks I should have one that says, ‘Kiss me, I’m a senior citizen,'” Dana said. 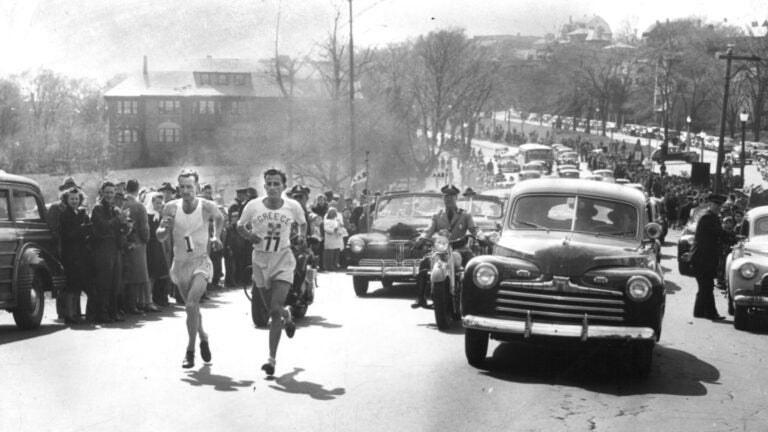