The Boston Athletic Association announced last month that this year’s Boston Marathon will include a unique ceremonial military relay.

Pairs of service members representing each of the eight towns on the marathon course will pass a baton down the famous 26.2-mile route. The Hopkinton duo will start their tandem run at 9:40 a.m., soon after the wave of elite women leaves. They’ll hand the baton to the Ashland pair on the town line and so on. The 16 runners include men and women from all five branches of the military—some are active, some are retired.

But what exactly is the military relay commemorating?

A hundred years ago, the BAA suspended the regular marathon because of U.S. involvement in World War I. The BAA announced in March 1918 that “very few service men would be in the proper condition” for a full race, according to Boston Globe archives. (Women weren’t officially allowed to run until the 1972 marathon.)

Instead, the BAA held a relay race for teams of military men. It was a competitive event, unlike this year’s relay. Members of the 10-man teams each ran 2.5 miles and passed batons down the 25-mile course from Ashland to Boston. (The course wasn’t lengthened to its current 26.2-mile Hopkinton start until 1924.)

That year, 1918, was the only year the BAA canceled the traditional footrace since the annual Boston Marathon began in 1897.

A headline announcing the Boston Marathon’s cancellation in 1918.

But when the BAA announced the relay, Globe reporter Lawrence J. Sweeney speculated that the full long-distance trek “may never be run again as a Marathon race.” He still suggested that the military relay would “undoubtedly… heighten the enthusiasm and patriotism” of spectators, though.

The batons were color-coded red or blue, representing either the Army or the Navy. Inside each baton was a message asking New Englanders to buy Liberty Bonds.

The Boston Navy Yard team was the favorite going into the relay. The local runners maintained an early lead for the first several miles, but lost its standing by the fourth leg to the Camp Devens Divisional Team. The squad from Central Massachusetts beat the other 13 competitors in the relay. 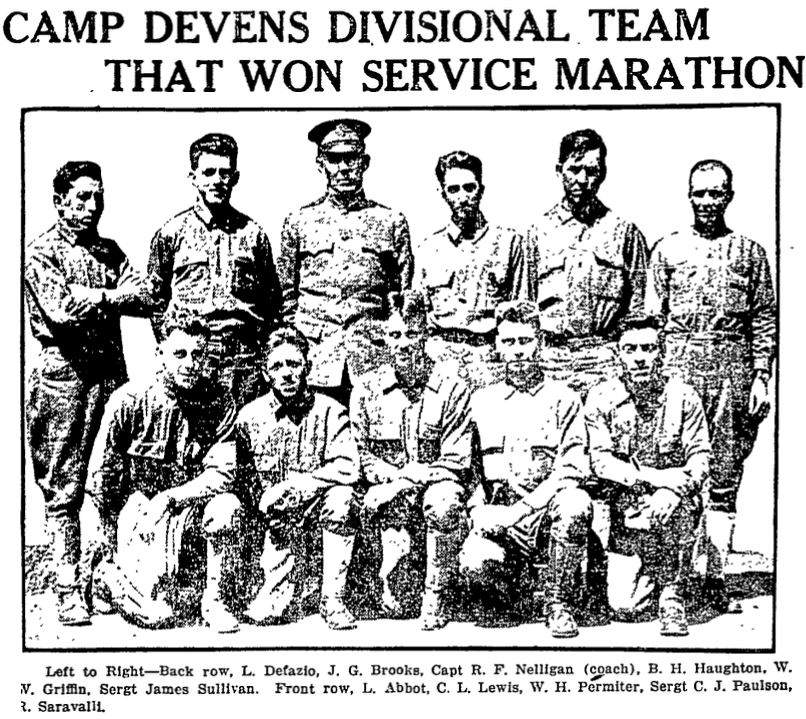 The winning team of the 1918 military relay.

“Those sun and wind-bronzed young soldiers and sailors, those deep-chested patriot-athletes had each run… at their topmost speed… and they did not even breath [sic] deeply,” Sweeney wrote after the race.

All of the runners had to race in full-uniform, sans coats and hats. “How different from other years when the specially trained runners appeared in scanty running suits and light running shoes,” Sweeney wrote.

The BAA actually considered canceling the marathon a year earlier when the U.S. joined World War I in 1917. The U.S. had just declared war on Germany at the beginning of April, and the race was scheduled only a few weeks later on the 19th. A Globe reporter wrote that despite the war, “the interest [was] great [as] indicated by the number of entries received” by hopeful champions. That year, a whopping 70 men ran.

Headline news in the week before the 1917 marathon.

The BAA opted not to abandon the 1917 race, noting that athletic programs had continued in the United Kingdom and Canada as a way to keep soldiers in shape on and off the battlefield.

And in 1919, the first race after the Great War, the BAA voted to reinstate the regular marathon. Despite Sweeney’s conjecture, spectators weren’t very interested in the relay, considering the small crowds along the course. After all, “the people like to see the men plod over the entire course, instead of a section of it,” as a Globe reporter wrote.

Still, only 48 racers competed in 1919, the lowest in almost 20 years—many marathon regulars were still in the military or were only recently discharged.

A headline about the Boston Athletic Association returning to the traditional marathon in 1919.

But in 1920, the Boston Marathon reached its regular numbers once again, with 76 men running.

And now, a century later, tens of thousands will once again venture out from Hopkinton to Boston. If you’re making it to this year’s race Monday, keep your eyes out for those military members commemorating the 1918 race. 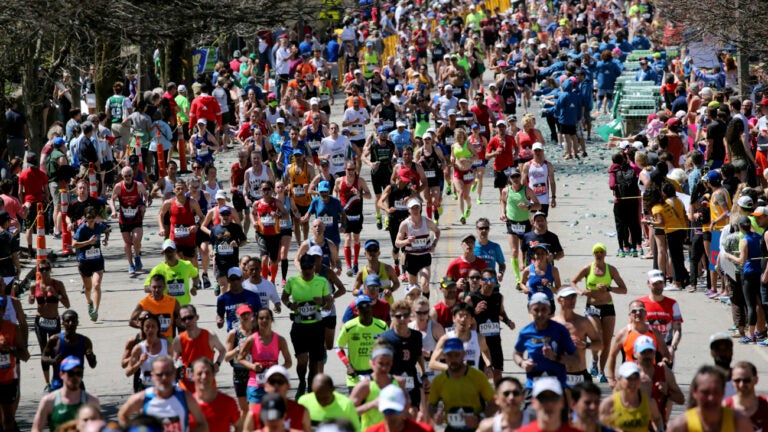