There are few traditions more timeless or iconic in New England than the Boston Marathon.

If you grew up in Massachusetts or have lived here for a while, chances are you know a fair amount about the history of the event. You probably know where the marathon starts (Hopkinton) and where it ends (Boylston Street). You might even know someone running it this year.

But do you know how Heartbreak Hill got its name? Or why the unicorn is the race’s symbol? Impress your friends with the answers to these interesting questions about the Boston Marathon.

Why is the marathon on a Monday?

The marathon is run on Patriots Day, which is the third Monday in April.

It all stems back to the early tradition of the event. Patriots Day is a Massachusetts holiday commemorating the battles of Lexington and Concord, which were the start of the Revolutionary War. The holiday symbolizes freedom and independence, and now it’s often synonymous with a day off from school, an early Red Sox game, and a marathon that draws runners and fans from around the world.

However, it wasn’t always this way. For the first 71 years, the marathon was held on any given day, except for Sundays. Fifty-one years ago, for example, the marathon took place on a Friday.

Why is a unicorn the symbol of the marathon?

Why is it on jackets, medals, and trophies? The most common belief is that the mythical creature, which started as the symbol for the Boston Athletic Association, was on the family crest of one of the BAA’s founding members. The organization, which was founded 20 years before the race began, used the unicorn as its symbol for all sports.

How did Heartbreak Hill get its name?

Heartbreak Hill is generally considered the toughest part of the course. After several mostly hilly miles, runners must ascend a steep half-mile uphill at mile 20.

In 1936, Johnny Kelley was eyeing a repeat when he caught up with Ellison Brown, according to the Associated Press. He patted Brown on the shoulder as he passed him on that final climb, but the tactic backfired, as Brown responded and passed him back while Kelley lost steam.

When were women finally allowed to race?

Women weren’t always permitted to enter the race, and their eventual acceptance is linked to a few pioneers.

Bobbi Gibb ran the 1966 Boston Marathon in a black bathing suit, Bermuda shorts, and boys running shoes. The Boston Athletic Association had rejected her application, but she hid in the bushes near the start, snuck into the mishmash, and ultimately became the first woman to finish the race in full. 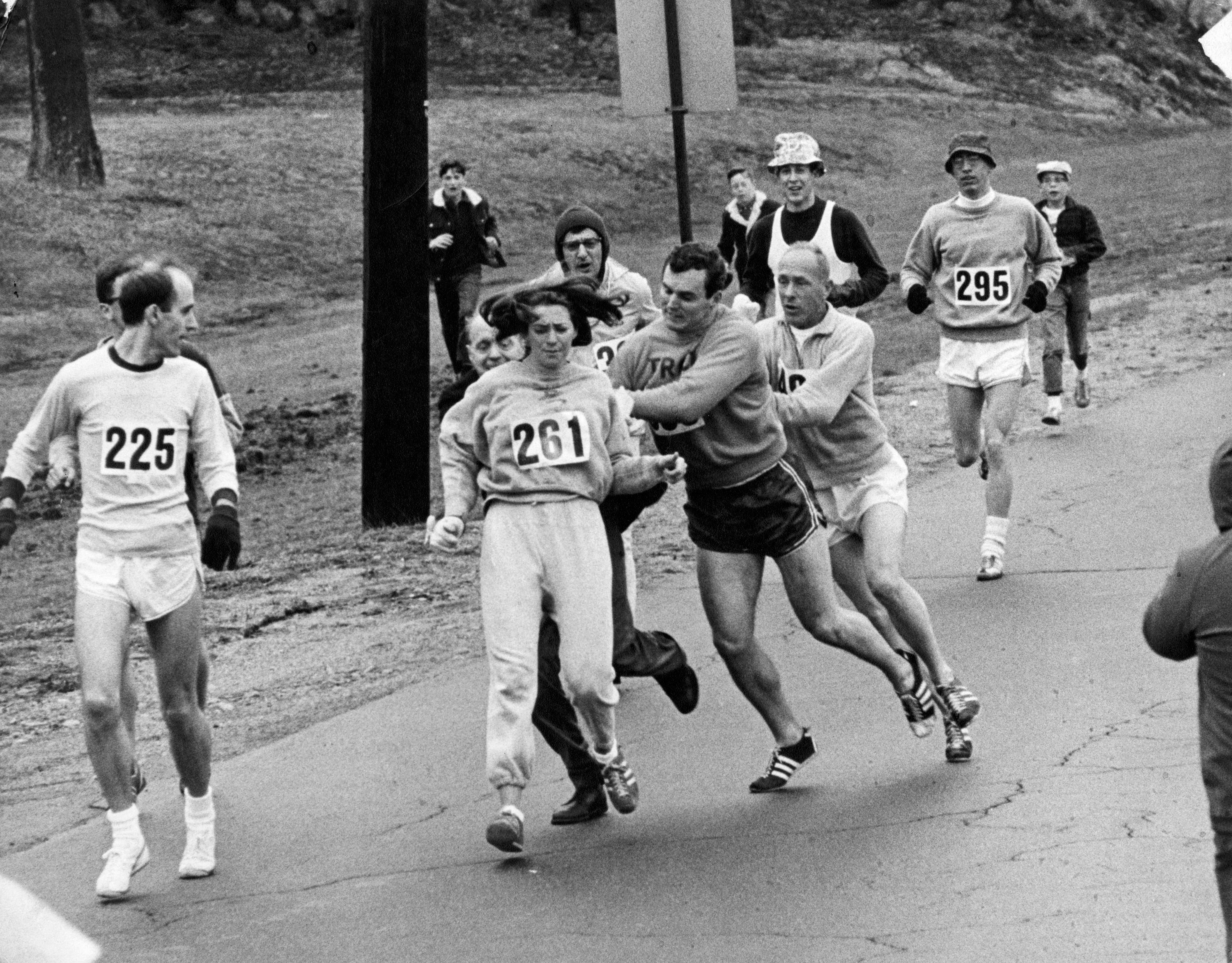 Kathrine Switzer, of Syracuse, N.Y., center, was spotted early in the Boston Marathon by Jock Semple, center right, who tried to rip the number off her shirt and remove her from the race. Switzer’s friends intervened, allowing her to make her getaway to become the first woman to “officially” run the Boston Marathon on April 19, 1967.

The following year, Kathrine Switzer followed suit. She didn’t indicate her gender on her race application and was issued a bib number as “K. V. Switzer.” Jock Semple tried — unsuccessfully — to physically remove her from the race (pictured above), but Switzer plowed forward and finished in 4 hours and 20 minutes.

In the fall of 1971, the Amateur Athletics Union made a groundbreaking decision to allow women to enter. The next year, in 1972, Nina Kuscsik became the first official female champion. Eight women started the race that year, and all eight finished.

How do runners qualify?

All Boston Marathon entrants have to meet competitive time standards, which correspond to age and gender. The race must be certified by USA Track and Field, the Association for International Marathons and Distance, or another national governing body.

The qualifying window is open until the conclusion of registration for the Boston Marathon, and only a certified full marathon distance will be accepted for qualifying.

How long is the route?

The short answer is 26.2 miles, but the longer answer is quite interesting. The first race, on April 19, 1897, was 24.5 miles, spanning from Metcalf’s Mill in Ashland to the Irvington Oval in Back Bay. John J. McDermott of New York finished in 2:55:10 — amid a starting field of 15 — to forever cement his name in Boston Marathon lore.

In 1924, the course expanded to 26 miles, 385 yards (roughly 0.2 miles), to conform to Olympic standards, and the starting line was moved from Ashland to Hopkinton.

… and what path does it take?

The Boston Marathon begins in Hopkinton and ends on Boylston Street, but what’s in between? The course starts on Main Street and follows Route 135 through Ashland, Framingham, Natick, and Wellesley to where Route 16 joins Route 135.

It continues on Route 16, through Newton Lower Falls to Commonwealth Avenue, turning right at the fire station onto Commonwealth, which is Route 30.

One month to go until the 123rd running of the Boston Marathon! #Boston2019 pic.twitter.com/08Bq7zx8W6

It winds through those treacherous Newton Hills, bears right at the reservoir onto Chestnut Hill Avenue to Cleveland Circle, then swerves left onto Beacon Street, and eventually through Coolidge Corner.

Kenmore Square is one mile from the finish line, and Commonwealth Avenue guides the runner there. The course turns right onto Hereford Street, and then left onto Boylston Street before reaching the finish line near Copley Square.

What are the fastest times ever?

Planning on setting a course record? Well, here’s what you have to beat.

Geoffrey Mutai, of Kenya, unofficially ran the fastest marathon ever in a time of 2:03.02 in 2011. Dennis Kimetto ousted him in Berlin in 2014 for the No. 1 all-time spot, but Mutai’s Boston mark remains as the men’s open course record.

What’s the best way to watch the marathon?

It’s all about personal preference, but the marathon website has a handy table with rough estimates of when to see the lead men and women at various points. There are several great spots to view it in person, including near the Framingham commuter rail stop, the Boston College campus, and Kenmore Square near the “Boston Strong bridge.”

If you don’t want to deal with the traffic, you can watch the race on TV. Here’s the local schedule:

Nationally, the Olympic Channel will run a preview show from 4 p.m. to 5 p.m. that Sunday, and NBCSN and NBCSN Gold will have race day coverage on Monday, from 8:30 a.m. to 1 p.m.

What time does the marathon start?

The Men’s Push Rim Wheelchair starts 9:02 a.m., and start times are staggered over the next few hours, culminating with Wave Four runners beginning at 11:15 a.m. 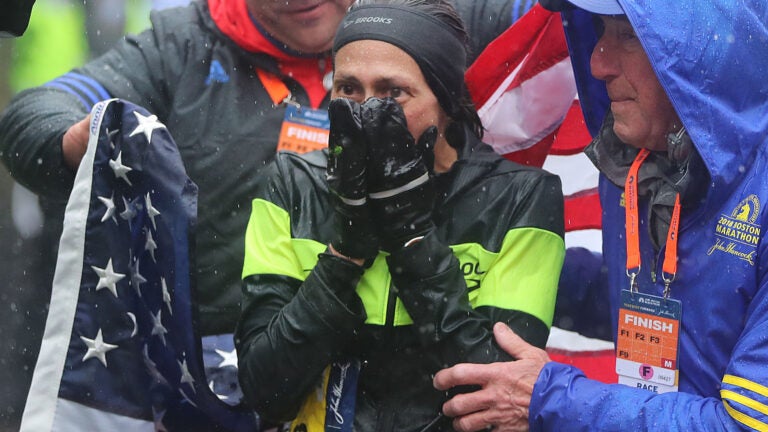 How much prize money do you get for winning the Boston Marathon?