That said, the 122nd running of the Boston Marathon on Monday was, in a word, epic — as in epic misery. Though, now that it’s over, it’s a great story to drone on about at cocktail parties for the next while. Not long, I promise, maybe 20 or 30 years, tops.

I’m sure there have been more epic conditions for this race. They’ve been doing it for 122 years, after all. It was nearly 90 degrees in 2012. But Monday was as high on the misery index as anyone I talked to could remember.

For days the race’s roughly 30,000 participants had been staring at weather apps and radars, playing amateur meteorologist and praying that the forecast for temperatures in the 30s and 40s with driving rain and a 20- to 30-mph headwind somehow wouldn’t come true. We traded notes all Sunday on what we were going to wear. In the end, I never took off my windbreaker. Neither did the women’s winner, Desiree Linden. That never happens.

Still, I rose at 5:54 Monday morning in my cousin’s apartment in the South End to the sound of birds chirping. My hopes rose, too.

Then I walked to Boston Common to take the bus to the start in Hopkinton in slanted rain. My shoes were soaked and my toes nearly numb as I took a seat on the bus. I was bundled up like a third-grader ready for a walk to school. In Minnesota. In January.

In the next seat was a woman from Utah wearing a racing singlet and running sleeves she planned to discard. It rained here three years ago, she reminded me.

I knew that. I ran that year, too, but the rain didn’t start in 2015 until much of the field, including me, was nearly half-done. And the mercury felt about 15 degrees higher than the 37 degrees it was as we journeyed to Hopkinton. Yet there was little question this steely woman from the West was way less terrified of the next few hours than I was.

Any hopes of pre-race comfort in the tents behind the school disappeared when we arrived at the start village behind Hopkinton High School, which had turned into a mud bowl. Smart runners brought a second pair of shoes to change into on the start line. I brought extra socks, but putting a dry sock into a mud-soaked sneaker doesn’t work so well.

For the first 5 miles my feet felt like they were in ski boots. I couldn’t feel my toes for the first 5 miles as the rain shifted between steady downpour and Noah’s Ark-style soaking. I desperately wanted to finish, but I didn’t want to lose extremities in the process. I started jogging my memory to recall the hospitals along the route. There are several, thankfully.

And then, after about an hour, it all became sort of normal for a bit. You settle into a rhythm. Splish, splosh. Splish, splosh. There were moments when the rain slowed, though it never stopped, and the wind quieted, and you thought, OK, no big deal. Then, just as quickly, Mother Nature unleashed storm cell after storm cell for a few minutes just to keep us on our toes. Your wet, miserable toes.

So why not quit? Because long distance runners live for the story. We love you thinking we are just crazy enough to run 26.2 miles in driving rain and freezing temperatures. It’s rebellious, almost countercultural, or at least it was in the pre-running boom days, and that spirit still lies at the center of what is now a truly mainstream endeavor.

Also, while plenty of Bostonians were smart enough to stay inside — this is supposedly the area with the largest concentration of graduate degrees, after all — tens of thousands of others came out to cheer us on, and did they ever bring it.

Bruce Springsteen’s “No Surrender” was blasting on the speakers as I passed through Natick. You could hear the Wellesley women screaming in Mile 13 a good quarter-mile before we got to them. An old college friend appeared to cheer me on Heartbreak Hill. Haven’t seen her in 25 years. Thank you!

And then, eventually, the six most beautiful words in distance running happened. “Right on Hereford, left on Boylston.” That’s your last half-mile in this magical race, and I was streaking toward the finish line in Copley Square, airplaning my arms and weaving across the road in delirium. Sure there was some hypothermia, after it was done. Another deluge, more gusty winds. Bring it on.

Best. Boston. Ever. At least in the telling. 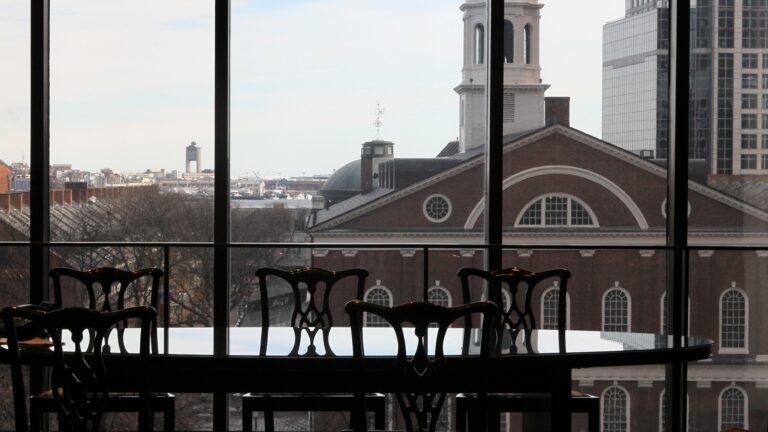