“I don’t have the right words,” Desiree Linden told reporters, as she shivered under a heat-sheet blanket after winning the 122nd Boston Marathon. “I’m thrilled.”

Linden became the first American woman to win the Boston Marathon in 33 years, finishing with a time of 2:33:41 Monday — ten minutes slower than her personal-best 2:22:38, which she set at the 2011 Boston Marathon. The field’s pace was noticeably slower Monday, largely due to the rainy weather conditions.

“It’s supposed to be hard,” Linden said. “I just want to thank John Hancock and the BAA for giving me the chance year after year and believing in me, sometimes when I didn’t believe in myself. It’s good to get it done.”

Linden first competed in the Boston Marathon in 2007, when she placed 19th with a time of 2:44:56. Some of her best past races include second-place finishes at the 2010 Chicago Marathon and 2011 Boston Marathon, but Monday marks her first world major marathon victory.

The 34-year-old didn’t lead the pack for the majority of the course — even slowing down to wait up for fellow American Shalane Flanagan to use the bathroom roughly halfway through her race. But Linden slowly but surely chipped away at the leading runner, Mamitu Daska of Ethiopia, and moved into first place at the 22-mile mark. American Sarah Sellers came in second with a time of 2:44:04, while Flanagan finished seventh with a time of 2:46:31.

Seven of the top 10 female finishers were American.

“It’s on the up and up,” Linden said of the U.S. marathon program. “We’ve had great role models. There’s a big future ahead. I think today there was a lot of camaraderie on the course. It was who was going to breakthrough. It could have been anyone’s day, I was just very, very lucky to get it done.”

Post-race with the champion, Des! pic.twitter.com/dpbwwuCJAc 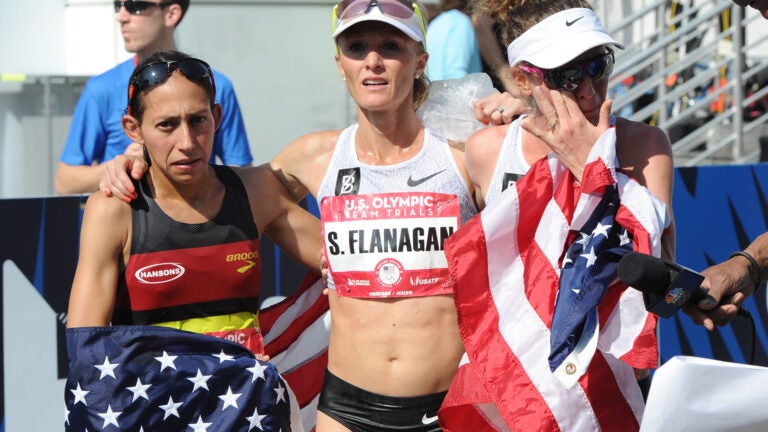 Desiree Linden waited for Shalane Flanagan during her bathroom break