When Rachel Hyland ran her first Boston Marathon in 2012 in a blistering heat, she set a then-personal record, finishing in 48th place in the women’s division in 3:06:18. For the 2018 Boston Marathon, her second Boston Marathon and her ninth marathon overall, Hyland faced the other side of the extreme weather spectrum. She ran on Monday in biting cold, howling wind, and pounding rain, and she ultimately fared far better than in 2012, coming in fourth in 2:44:29.

It was a surprising finish for Hyland, 31, who has taught Spanish at Phillips Academy in Andover for the past eight years, about as long as she’s been running marathons.

“I wanted to have a good, strong finish,” Hyland said. “I’d run on the course so many times, and it just felt incredible to get through the hills feeling strong. But I had no idea that I was going to finish fourth, so that was amazing.”

Hyland, who’s originally from Lake Bluff, Illinois, said that the burst of wintry weather last month may have played to her advantage.

“This [race] didn’t feel too bad coming off of an intense winter,” Hyland said. “Especially in March, there were a lot of snowstorms, so I was ready for the weather.”

Most hopes of an American winning the 2018 race had been pinned on Marblehead’s Shalane Flanagan. In the end, Hyland was one of five American women, including winner Desiree Linden, to finish ahead of Flanagan, who ended up in seventh.

Hyland said she was surprised to find herself suddenly moving past elite runners as the race neared its end.

“I passed a lot of elite women in the last 5k,” Hyland said. “I think maybe the cold got to them, or maybe with [Linden] surging, that affected how they felt at the end. I felt pretty even. I went by feel. I didn’t look at my watch the entire race, and it worked out.”

Hyland, who also coaches track and cross country at Andover, said she was appreciative of a group of her students who came out to cheer her on.

“It was pretty incredible,” Hyland said. “There was a group of them at mile 17. To come out in this weather, that was great.”

If Hyland taught at a Massachusetts public school, she might have a full week off to rest and recover during April vacation. But that’s not the case at Andover.

“It is not April vacation for us,” Hyland said, “so I will be back at school tomorrow. I’m sure I’ll be fine.” 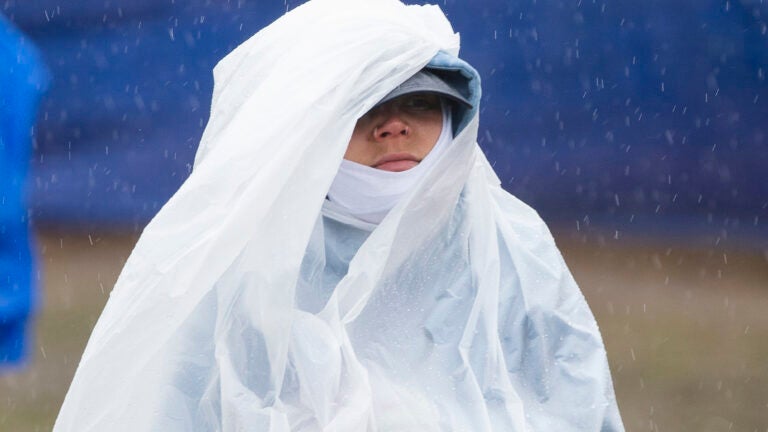 10 photos that show how cold, wet, and miserable it is at the 2018 Boston Marathon