Thousands of people from around the world run the Boston Marathon each year.

But race director Dave McGillivray estimates there’s only a handful of people for whom the race course is as familiar as the back of their hands.

Ron Kramer is one of those people.

The 79-year-old Brighton native has completed the 26.2-mile race 15 times. But on Patriots’ Day, he’ll have his back to the course, as he has for the last three decades, when he helps shepherd runners from Hopkinton to Boston.

As lead vehicle coordinator for the Boston Marathon, Kramer is responsible for organizing and directing the more than 100 vehicles — cars, police, and Boston Athletic Association motorcycles, bicycles, and media trucks — that travel with the marathon participants through the race.

“With all these vehicles that are in front of the various divisions and races of the marathon, safety — safety first — is our benchmark,” Kramer told Boston.com. “I repeat that a number of times, and my team understands that. You might think that that is a commonplace feature in races throughout the world, but you’d be surprised.”

Watch video of other races and you might see official motorcycles or even bicycles darting in and out of the runners during the marathon, he said.

“Our goal at Boston is to never ever let that happen,” Kramer said. “We make sure that all our vehicles are in front of the runners so that they have the opportunity to compete unimpeded. And that’s our benchmark.”

That’s been Kramer’s goal since he took on the lead vehicle coordinator role for the 1989 Boston Marathon at the invitation of McGillivray, who had been retained by the BAA as a consultant in the late ’80s.

Previously the vehicle program for the marathon was managed by a member of the BAA’s board.

“There was the press truck and maybe one other vehicle,” McGillivray told Boston.com. “And that was about it. But as the race grew and became more complex, I just recognized that we needed somebody to oversee that whole sort of aspect of the race itself.”

He thought of Kramer, who he knew had a love for and dedication to the sport. The pair met running road races in the Boston area in the late ’60s and early ’70s. And despite a 15-year age gap, they became fast friends.

“I was 15 or so, and he was 30,” McGillivray said. “It was just an easy match in terms of personalities and drives and passions for the sport. So we actually raced against each other in a number of races and continued to remain friends and stay in touch.”

Kramer, a Navy veteran, worked for 37 years in the packaging industry in Boston. But even once he retired and moved to Florida, the friends kept in touch. When McGillivray founded his company, DMSE Sports, Kramer offered to help and started working as an independent contractor, organizing races around the country at the age of 61.

When McGillivray asked him to take on the role of improving the lead vehicle program for the Boston Marathon in the late ’80s, Kramer assembled a team he knew was strong.

His wife, Fran, and daughter, Alice, are among those from the original group that pitch in to help on his team each year. Fran works as an assistant to the driver of one of the television trucks, while Alice drives the lead vehicle for the women’s wheelchair race.

“I looked to a lot of family and friends,” Kramer said with a laugh. “And I’m glad to say that over the years, practically all of them are still with me.”

That first year in the job, riding in the vehicle in front of the elite runners, was exhilarating, he said.

“Having been a runner for many years and being pulled back in the pack and not seeing what it’s like with the elite runners up front, having the opportunity now to be on an open truck looking at the runners and seeing the race firsthand, it was a thrill,” Kramer said. “I might have concentrated a little bit more that first year on the race instead of what my assignment was going to be.”

In the ensuing decades, Kramer has grown the program into a “sophisticated, complex discipline,” McGillivray said. 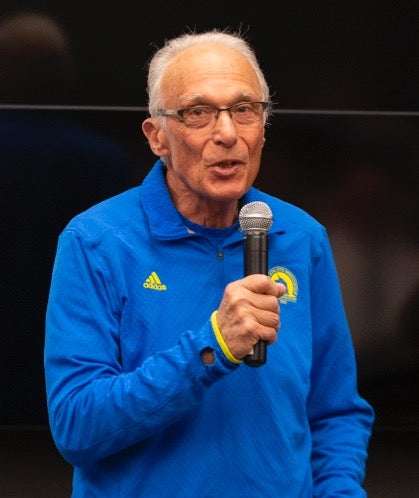 The marathon director said his friend has set the standard for lead vehicle programs around the world, so much so that organizers of other races approach Kramer and ask for his advice for creating safe programs.

“There’s a functional nature to every vehicle that’s out there, and he understands that,” McGillivray said of his colleague. “[He] implicitly knows who needs what and when it’s safe for them to get their share. All the while doing this he’s looking at the runners with his back towards the course.”

Without looking, Kramer knows the topography of the race, each bend in the road, and where the streets narrow.

“He’s got all that imbedded in his head,” McGillivray said. “He knows exactly when and where and how and why.”

Starting months before the marathon, Kramer meets with state and Boston police to begin planning the vehicles needed for safety. His team begins assembling in the month before the race. Final instructions and review of the race day plan are given the Saturday before the marathon.

Marathon Monday begins with Kramer meeting his team at the Fairmont Copley Plaza Hotel at 5:30 a.m., where they take a bus together out to the start in Hopkinton. Once there, they gather at a home that has been opened to them over the years on Ray Street for coffee before assembling and lining all the lead vehicles up on the road in the correct order for the race. When state police arrive with their motorcycles and cruisers for the race, Kramer’s team works with them to stage the vehicles in the appropriate spaces. Same with the TV and other press trucks.

“[We] line them up in the exact order that they will come out onto the road for the beginnings of the various races, the first race being the wheelchairs and then the handcycles, the elite women, the elite men, and the open race,” Kramer said.

The 79-year-old himself rides on the back of the lead truck attached to the elite men’s race. Outfitted with a set of headphones and lines of communications to his team, as well as TV producers, he directs all the vehicles throughout the race.

“I’ve had the good fortune of doing it for so many years, having a strong team that are veterans,” Kramer said. “Many of them have been there all through the years that I’ve done it.”

In many instances, he said, his team anticipates what he might say before he says it. 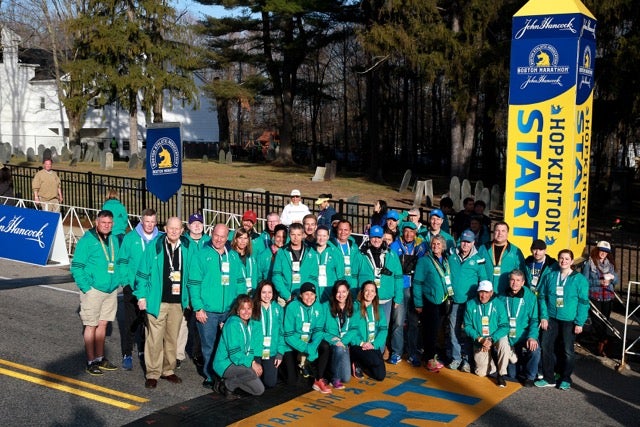 Kramer with the lead vehicle program team in 2016.

He decides when they should slow down or speed up, which side of the street the vehicles should be on, if they should move left or right. If a runner is having a burst of speed, he’s the one who tells the lead vehicle to accelerate, giving the step-by-step driving directions needed to give runners space and safety during the race while allowing the public watching the live television broadcast a clear view of the action.

It’s a lot to keep track of, Kramer admits.

“I will be honest in telling you — there are times when it does get a little nerve-wracking,” he said.

The 2018 Boston Marathon brought one such situation.

“It was a horrendous day, as you know, the weather was just awful, God awful,” he recalled.

Last year, like usual, the elite women’s race started 28 minutes before the men’s elite field. Traditionally, Kramer said, it is typical for some of the slower women to be passed by the fast men leading their field.

But because of the weather, unlike previous years, Kramer and the vehicles driving ahead of the men’s field started to catch the lead women around the 23-mile mark, such was the impact of the severe cold, rain, and wind of the day.

“We came close to within two-and-a-half or three minutes of coming and passing the lead woman,” Kramer said.

That might not seem like a big deal, but picture the number of vehicles that travel in front of the various divisions. Now, imagine that grouping of vehicles having to pass another similarly sized group of vehicles on course, which — Kramer pointed out — is narrow from Beacon Street all the way to the finish line.

“That was a nerve-wracking experience,” he said. “‘How to safely pass these fast elite women and what would we do if we actually caught the leader with all those vehicles?’ So fortunately, we didn’t.”

Even though such a situation is not likely to arise again, Kramer said there’s now a plan in place for how to maintain safety in a passing situation with all those vehicles.

Other hairy situations range from a water main break in the course one year to a TV crane being too low on the course as the lead vehicles approached.

Other than timeliness and safety, Kramer said the third “cardinal rule” for his position is that there can be no cheering from the lead vehicles for the runners.

It’s one the 79-year-old admits he broke, just once, when watching what he said was his “absolute favorite” race of the Boston Marathon.

It occurred in 2014, when Meb Keflezighi won the marathon, becoming the first American man to do so since 1983.

“Seeing Meb and knowing him personally — and it was so emotional the year after the bombings to have an American leading and eventually winning the race — I broke my rule,” Kramer said. “I’m looking at him, and I’m pumping my fist and so forth, silently cheering him on as I did what I needed to do. … It really was quite exciting. That definitely was the most exciting for me of all the years that I’ve done the marathon.” 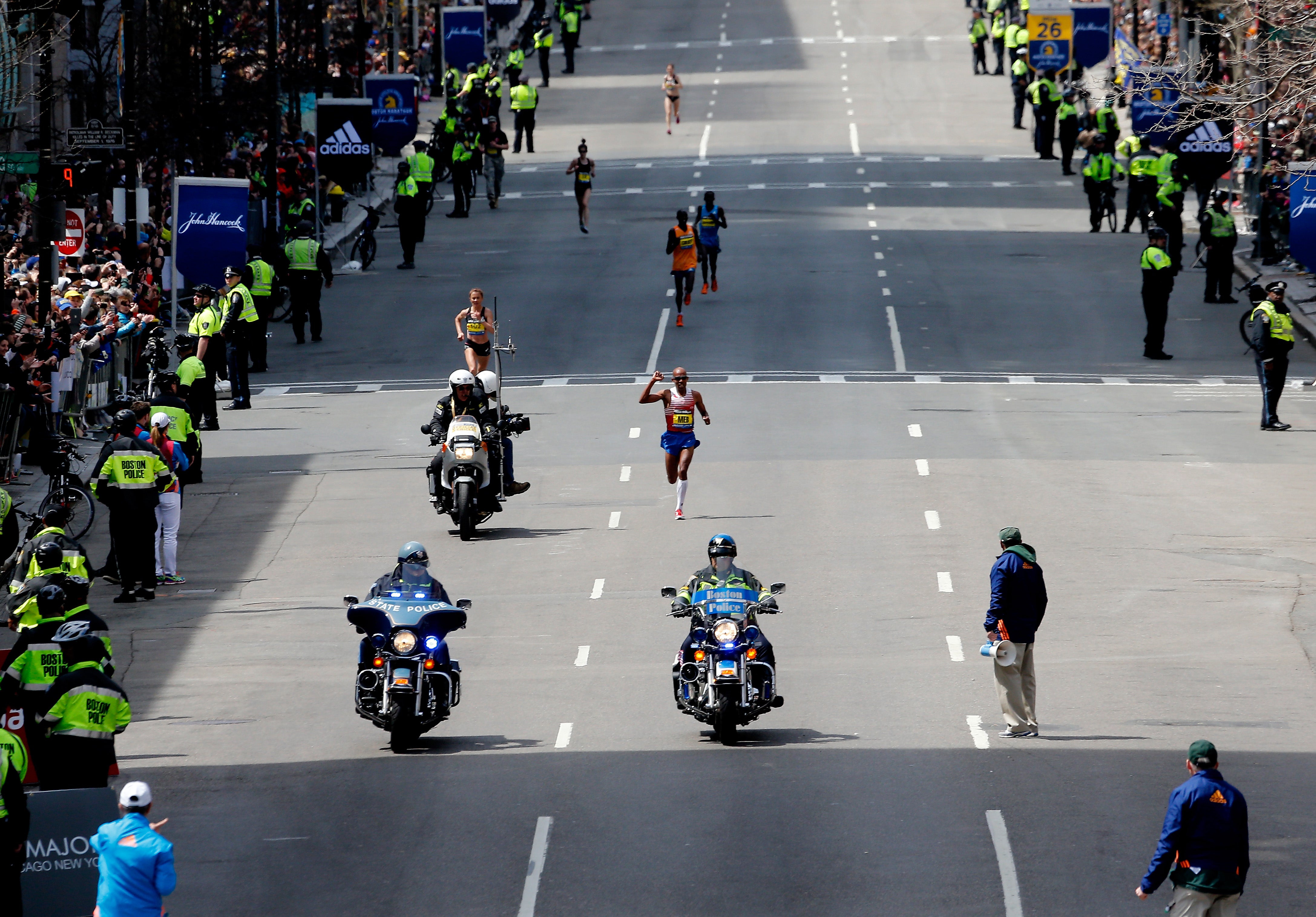 Police and marathon vehicles escort Meb Keflezighi as he approaches the finish line of the 2014 Boston Marathon.

Kramer’s day doesn’t finish once he crosses the finish line.

It doesn’t finish until about midnight, after he’s helped shepherd one last runner those 26.2 miles.

A few hours after he’s reached Boylston Street, the 79-year-old drives his friend McGillivray back out to Hopkinton, where the marathon director runs the 26.2 race that thousands have just completed.

Kramer, in his vehicle, is there “every step of the way,” he said.

“He has pretty much always been willing to continue and take me back out to Hopkinton and, along with my brother Bob who’s been there every single year with me at night, ride along in the car and leapfrog myself and a few other people who are running with me and do for me what he just did for 30,000 people,” McGillivray said. “Make it safe and make it possible for me to get from the start to the finish.”

For Ron Kramer, service is a habit. For 30 years Kramer has been the Boston Marathon’s Lead Vehicle Coordinator (LVC),… 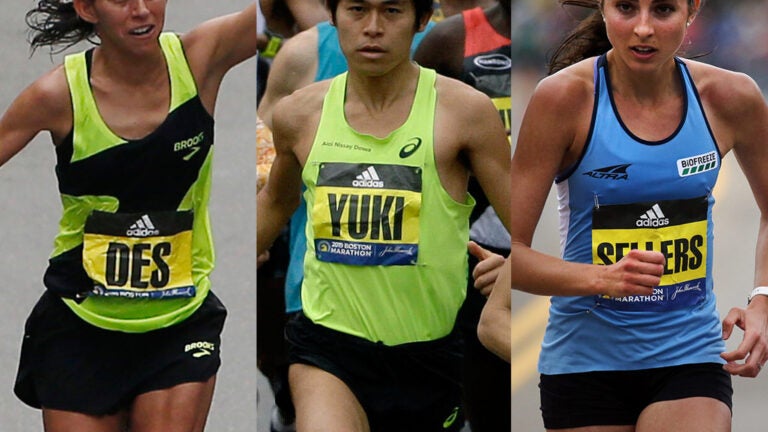