NASCAR driver Jimmie Johnson recognizes he might need to walk back his ambitious goal for the 2019 Boston Marathon.

Johnson, running his first-ever marathon on Monday, initially hoped to run the 26.2 miles from Hopkinton to Boylston Street in under three hours. But the 43-year-old has acknowledged the chances of that actually happening are pretty low, especially with the complications he’s experienced while training.

“I think I need to adjust it,” Johnson told Boston.com in March. “I love to be goal-oriented, so I have that number out there. But I also recognize Boston is not your typical PR course, so I honestly don’t know what to expect.”

While preparing for the marathon, Johnson has suffered three injuries: His sacroiliac joint in his pelvis, his left calf, and his IT band on the outside of the thigh have all given him trouble. To make matters worse, he caught a cold while in Las Vegas for the Pennzoil 400. Johnson estimates the “unforeseen circumstances” have taken away about a third of his training time.

Still, Johnson aims to “leave it all out” on the course regardless of his finish time.

The seven-time NASCAR Cup Series champion — who swam in high school, and has previously completed triathlons as well as half marathons — first became attached to the Boston Marathon the year of the bombings. As someone who has “running a major marathon” listed as a bucket list item, Johnson said watching the aftermath of the attacks on television struck a nerve.

But Johnson’s day job interfered with his aspirations. The Sunday before the race remained a scheduling conflict for the next five years.

“I have been waiting patiently for the NASCAR schedule to shift,” he said. “This year it has, and I have Sunday off again.”

Even though he’s able to run, Johnson’s pre-marathon weekend was still fairly busy. On Saturday, he competed in the Toyota Owners 400, a 300-mile race at the Richmond Raceway in Virginia, before traveling to Boston later that night. Johnson called the Richmond Raceway “a moderately intense track,” noting that the ideal track in this situation would be one that requires a lower level of physical exertion.

Johnson said he has nothing on the agenda once in Boston, other than ensuring he follows his regimented nutrition — his diet is 50 percent carbohydrates, 25 percent protein, and 25 percent fat — and recovery plans. Races like Saturday’s usually leave him with a sore lower back, glutes, and hamstring.

“It’s going to be a big challenge,” said the five-time Driver of the Year, who will wear bib No. 4848 in honor of his No. 48 Chevrolet. “That’s part of why I love signing up for these things is to see how far I can push myself.”

Jimmie Johnson runs under the stands between events.

To train for the marathon, Johnson often gets up early or stays up late to balance his other responsibilities as a professional race car driver, a husband, and a father. The majority of his miles have come in North Carolina, where he lives with his wife and two children, but he’s logged runs in Georgia, Florida, Nevada, and Arizona as part of his NASCAR travels.

Johnson said he’s also tried to simulate specific aspects of the race into his routes, from the 10 a.m. start time to the elevation. Not only has he focused on prepping for Heartbreak Hill, but he’s also practiced running long distances downhill because of the toll it can take on the quads. Johnson also incorporated swimming and cycling into his workouts for cross-training purposes.

“It is very similar to the mindset in the car,” he said of his endurance training. “That’s what’s drawn me into it so much. What I learn on my feet or on the bike or in the pool in pushing through these barriers makes me stronger for my day job in the race car, mentally and physically.”

So, what has he learned about himself from the journey?

“I’ve just confirmed that I enjoy suffering,” he said. “The accomplishment I feel after pushing through something, there’s a feeling there that gives me the confidence for the day, the week, whatever it is. It’s just something that I need in my life.”

Jimmie Johnson on a training run at Freedom Park in Charlotte. 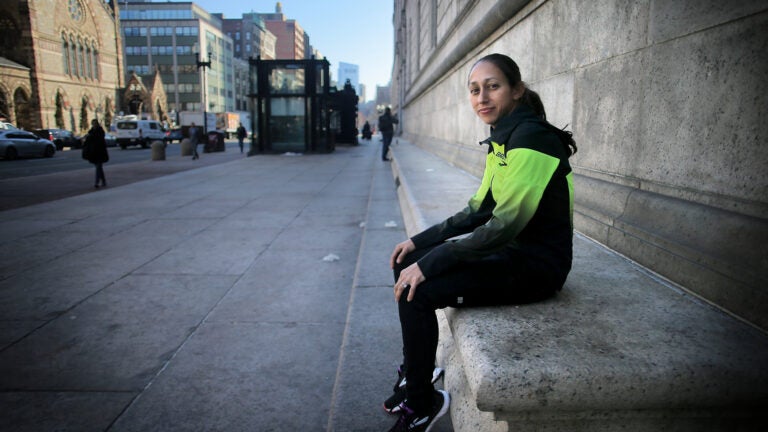 A year after winning the Boston Marathon, Des Linden is still Des Linden