Boston Marathon legend Joan Benoit Samuelson, then 21, recorded a Boston Marathon women’s course record and American women’s marathon record in 1979 with a time of 2:35:15 in 1979.

For those who remember that 1979 finish, Samuelson appeared timeless Monday when she ran Boston once more. Joan Benoit runs through the finish line of the Boston Marathon in Boston, April 16, 1979.

Benoit Samuelson finished the 2019 race with a time of 3:05:18 (7:01 minutes per mile), clad in a Bowdoin College singlet and a backward baseball cap just as she wore 40 years ago.

Benoit Samuelson recently told Boston.com she intended on finishing the marathon within 40 minutes of her record-breaking time from ’79. Her end result Monday fell just over 30 minutes longer than that 1979 pace, well within her self-determined range.

“The deal was to try to run within 40 minutes of 40 years ago, and I knew I was strong enough, but the weather was humid,” a humble (or disbelieving) Benoit Samuelson told WBZ’s Paul Burton after finishing the race. “It’s been a cold, snowy, icy winter in Maine. It was hard when the sun started to break.”

“I have to thank them for not letting me quit,” she said.

“I ran with patience today,” Benoit Samuelson told reporters after finishing the race. “I didn’t know what the weather was going to do. I’m not used to the warmer temperature.”

Benoit Samuelson said she pulled her right calf entering Newton Lower Falls just as she was preparing to “really push.” She said she started the race faster than she should have, and had to remind herself to be patient throughout.

“Knowing the course like I know the course, I knew what was ahead,” she said. “So rather than gamble with pushing and pulling beyond repair, I just became patient again and got up over the hills and started to push again. 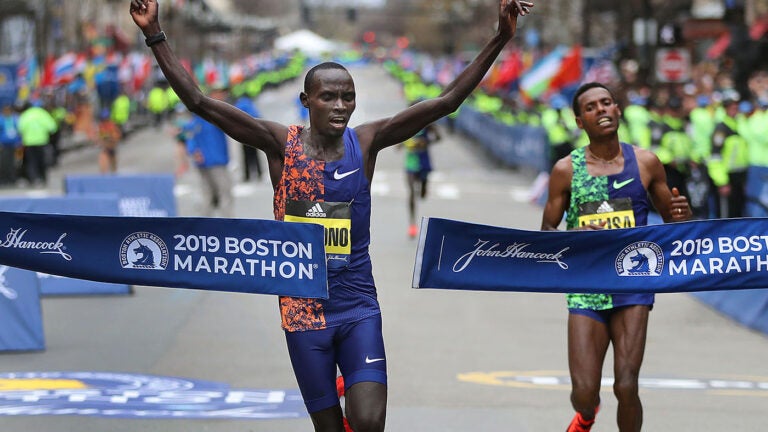 2019 Boston Marathon winner Lawrence Cherono on the epic battle to the finish: ‘I was so focused because I’ve never won a major marathon’